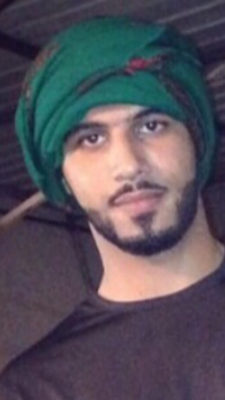 **Update: On 16 May 2018, Jaffer Demistani was released from custody after the government reduced his seven-year sentence.

On the night of 22 March 2014, an unmarked civilian pickup truck chased Jaffer Ebrahim Demistani. A group of officers from the Bahraini Ministry of Interior (MoI) stopped Jaffer and arrested him without presenting a warrant. The officers transported him to the Budaya police station. At the police station, officers beat Jaffer and questioned him about a group of Americans who had recently moved into the same building as him. After four hours of physical and mental abuse, Jaffer was transported to the General Directorate of Criminal Investigation (CID) building. Authorities held Jaffer at the CID for the next four days. During that time, officers forced Jaffer to sign a confession to charges of illegal assembly. The officers said if he did not sign a confession, they would charge him in terror-related crimes. The officers did not permit Jaffer to read the paper that they forced him to sign. Following his coerced confession, authorities transferred Jaffer to Dry Dock detention center.

Jaffer went to trial without further investigation into his case. During the trial, his lawyer insisted that the prosecution present the witness who had testified against Jaffer. The prosecution proceeded to postpone the trial numerous times over the next year, because the witness failed to appear. During this time, Jaffer presented alibi witnesses who verified he could not have been at the gathering in question. The verdict was postponed a full year and a half after his arrest. On 23 June 2016, a court sentenced Jaffer and another group of defendants to seven years in prison. None of the other defendants implicated Jaffer and denied they had ever met him. Jaffer’s lawyers have submitted an appeal, which is expected to be heard on 19 December 2016.

Jaffer’s imprisonment marks the latest in a pattern of harassment targeting him and his family. Bahraini forces killed Jaffer’s brother during the 2011 protests. Bahraini forces arrested and tortured his father, a nurse and leader of the Bahrain Nursing Society. Authorities targeted his father, Ebrahim Demistani, because he gave medical treatment to injured protesters. Courts sentenced Ebrahim to three years in prison, and he was released in 2015 after serving the sentence.

In 2013 while his father was in jail, Jaffer posted tweets imploring the government to provide him medical treatment. MoI forces subsequently arrested Jaffer upon his return from university in India, and detained him for nearly a month as reprisal for speaking out about his father’s ill-treatment. Though released, authorities did not drop charges against Jaffer. The Bahraini government detained Jaffer a number of times, each for a period of days, before releasing him again. The detention prevented him from going back to India to finish his studies.

The MoI officers who beat Jaffer violated Article 7 of the International Covenant on Civil and Political Rights (ICCPR). The officers also violated Article 14(3)(g) by forcing Jaffer to sign a confession under duress. Additionally, police forces violated the requirement, recognized in Article 9(3) that detainees be brought promptly before a judicial official. The complete disregard of alibi witnesses and failure to produce any physical evidence tying Jaffer to the protest for which he was charged reflect the Bahraini government’s lack of judicial integrity.

The Government of Bahrain continues to arbitrarily detain individuals, often on coerced confessions extracted through intimidation and torture, to silence political dissent and clamp down on free expression. The Bahraini authorities have continually harassed and targeted Jaffer and his family, because they advocate for peaceful reform and government accountability. The Government of Bahrain must respect its obligations under the international laws to which it has acceded by immediately releasing Jaffer Demistani and compensating him and his family for their suffering.