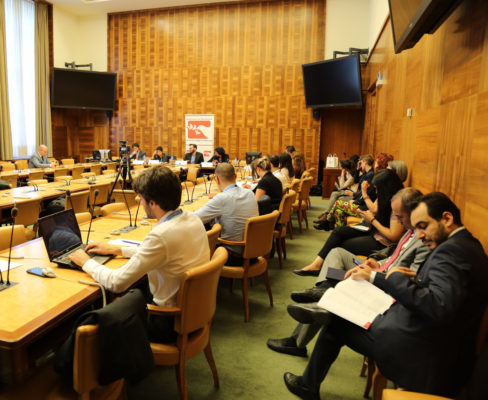 On 8 June 2017, Americans for Democracy & Human Rights in Bahrain (ADHRB) organized a side event during the UN Human Rights Council’s 35th Session in Geneva. Entitled “Women’s Rights in Saudi Arabia – Civil society, development, and the UN Commission on Women,” the event addressed the potential future role of women in the country’s Vision 2030 plan and changes in the male guardianship system. The event was cosponsored by: Cairo Institute for Human Rights Studies, Index on Censorship, the Gulf Center for Human Rights, Dewany, European Centre for Democracy and Human Rights, Human Rights Watch, and the Bahrain Institute Rights and Democracy.

Jeremie Smith, from the Cairo Institute for Human Rights Studies, 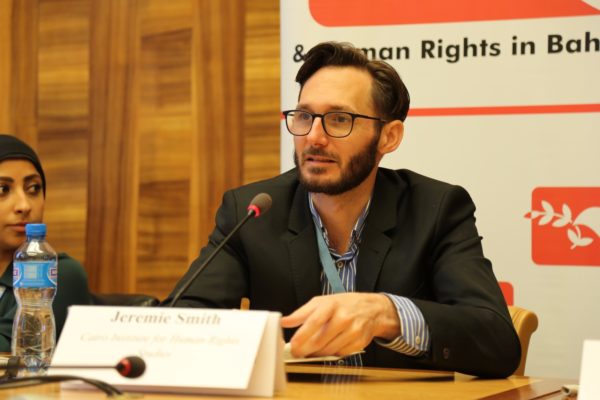 moderated the panel and opened by outlining the event’s topics and the importance of discussing women rights in Saudi Arabia against the background of Saudi’s election to the UN Commission on the Status of Women. In this light, a well-rounded, in-depth discussion of women’s rights is today even more relevant than before. After briefly introducing the panelists, he gave the floor to Tyler Pry.

Tyler Pry, an Advocacy Associate at ADHRB, outlined the immense time lapses between the promises made by the Saudi government to improve the status of women in the kingdom and the government’s actions toward this purpose. He discussed several regulatory and legislative steps the Saudi government has taken over the last five years to improve women’s rights but that, by design, fell far short of their ostensible goal. The changes Pry discusses are the 2016 introduction of Vision 2030, the granting of women’s right to vote in municipal council elections in 2011, the appointment of women to the Shura Council in 2013, the 2015 amendments to civil status law, and the 2016 introduction of a center for reporting domestic violence and abuse. These were promising steps forward to advance women’s rights. However, these reforms have failed to materially improve the situation of women. 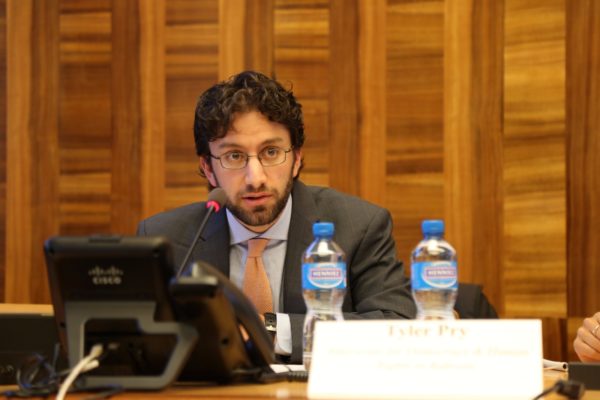 For instance, women are able to vote in municipal council elections, but even then, their engagement is sharply circumscribed due to government regulations that stop women from fully exercising their voting rights. Similarly, the civil status law amendments only grant women who are divorced their own identification cards, meaning other women must still have the approval or assistance of their guardians before they can fulfill a number of administrative and bureaucratic actions. Additionally, while the Saudi government criminalized domestic violence in 2013, it took them three years to set up a center for reporting abuse and violence.

In this way, the government has promised women a number of reforms, but has failed to fully carry out these reforms. Because of the government’s reluctance to meet its own commitments, ADHRB assesses that Saudi Arabia has failed to advance women’s rights and that its future efforts will also fail if they do not strike at the heart of the guardianship system 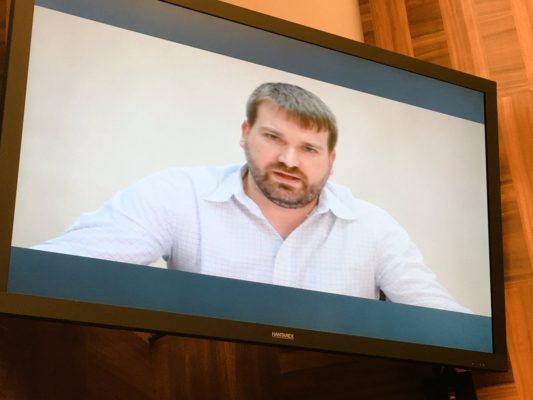 Watch, joined the discussion via video. He opened his message by referring to recent detentions of women rights activists such as Loujain al-Hathloul, Alaa Anazi, Dina Ali Lasloom, and Maryam al-Otaibi and others. He discussed Human Rights Watch’s work on Saudi Arabia, noting they have been actively working on issues like the guardianship system, issuing two reports in 2008 and then in 2016. When speaking of the guardianship system, he noted that, under the system women are essentially treated as legal minors. They cannot travel, rent a house, access medical services or the job market without the approval of their male guardian. Entering higher education and being eligible to work for certain employers also requires women obtain the consent of their male guardian.

Despite these strict rules, recent years have seen a rise in Saudi women vocally and publicly advocating for their rights, through engagement in civil disobedience and active use of social media. These actions have drawn local and international attention and created positive momentum around the issue. This shows that change is possible with an active and more vibrant community of activists advocating for women rights.

Maryam al-Khawaja, from the Gulf Center for 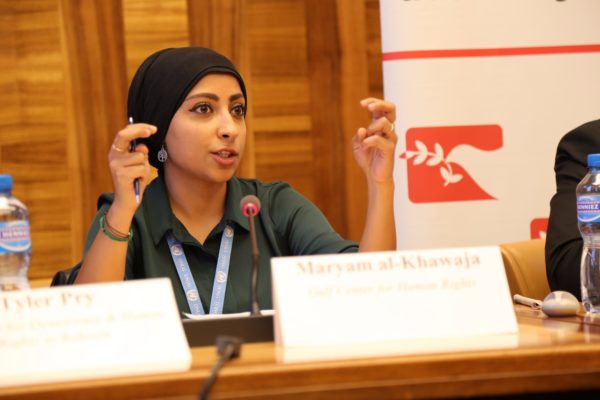 Human Rights, called the audience’s attention to a number of individual cases mentioned by Coogle. For instance, Dina Ali Lasloom attempted to escape her family and a forced marriage by fleeing to Australia. She attempted to travel through the Philippines, but was detained and forcibly brought back by her family members, who traveled to Manila to fetch her. She is currently being held in a detention center and her status is unknown. Two Saudi women currently in Turkey face conditions similar to the conditions Dina Ali faced. They have been detained in Turkey and face the risk of abuse and forcible repatriation. Several years ago, Loujain al-Hathloul, a Saudi women’s activist, was arrested and detained for 73 days after attempting to cross the border from the UAE to Saudi Arabia in her car. Recently, she was re-arrested and reports indicate it is due to her appearance in a documentary on male guardianship. Additionally, al-Khawaja raised the cases of Samar Badawi and Maryam al-Otaibi, both of whom have suffered as a result of the male guardianship system. Samar Badawi is known for fighting her father in order to marry the man she wanted to marry. Maryam al-Otaibi was arrested and detained in a women’s facility for leaving her father and abusive brothers to live alone in Riyadh. 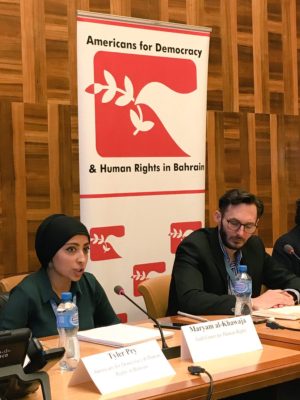 Al-Khawaja concluded her remarks by noting that without the support of civil society to buttress women’s struggle for equal rights, the battle is far more difficult. While, recent reforms may address certain issues, multiple levels of oppression leave other obstacles for women untouched and in place. This has been exacerbated by the suppression of what little civil society existed in Saudi Arabia. In the years after 2011, with the suppression of the few groups that existed we have seen a shrinking civil space move to an almost non-existent civil society space. At the end of her statement, she underlined the existing double-standard of the international community with regards to Saudi Arabia and noted that despite a lot of talk and many pledges, Gulf countries are not held accountable for their oppression of women. The time to wait, she stated, is over.

Joining the discussion virtually, Hala Aldosari, a Saudi women’s rights activist based in Washington DC discussed the reforms ostensibly laid out in the kingdom’s Vision 2030. She noted that Vision 2030 is supposed to enhance women’s place in Saudi society, but she noted that many of the women who will win from this reform already are somewhat successful. 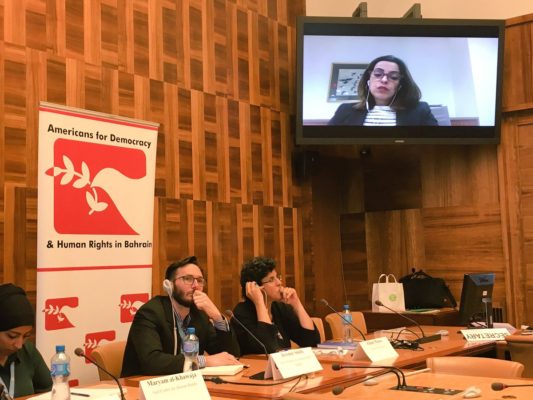 Vision 2030 reforms mainly benefit women with supportive families, not everyone. In this context, especially the most vulnerable women, such as migrants and stateless, face a number of legal obstacles and discrimination. Also, women who are seeking divorce in order to escape the guardianship trap may be caught in legal loopholes for years and face legal barriers. The Kingdom usually justifies limited progress in the name of societal conservatism, which does not reflect reality as the number of people advocating for reforms is increasing. However, these advocates and human rights defenders face severe legal consequences for their engagement, especially with regards to women’s rights. Ultimately, although Vision 2030 promises to introduce some modest reforms in women’s rights, it will likely not live up to the key elements recommended by the Committee on the Elimination of Discrimination against Women, especially with regards to legal rights, and likely not substantially improve the situation of women. 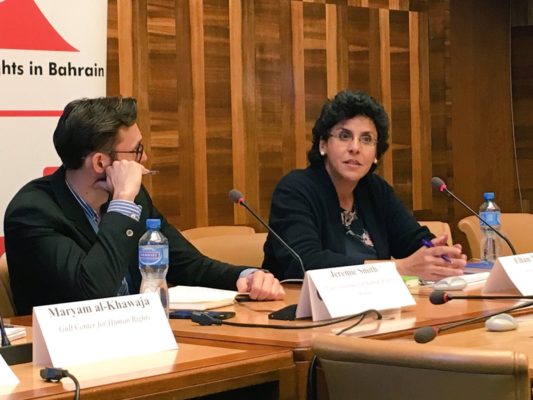 precludes the abolishment of the guardianship, which forms the core of Saudi Arabia’s system of oppressing women. However, modest reforms within this system are possible, and can result from non-governmental pressure through the campaigns of women’s rights activists, recently seen in Saudi Arabia. At the end, she echoed Hala Aldosari, as cultural relativism is and has been utilized by authoritarian regimes in the past to preclude societal change. In her remarks, she noted the highly structural nature of women’s discrimination in Saudi, relating this structure to authoritarian forms of government that disseminate their power through institutions and structures.

After these statements, Smith opened the Q&A section by remarking that the Saudi government’s assertion that cultural situation would not allow for gender equality is refuted by the number of activists, who continue their engagement despite harsh punishments. Another remark from the audience raised the question of who are the allies Saudi women can count on since UN mechanisms have not been very effective so far?

Manea replied by reiterating her claim that cultural relativism is a strategy of authoritarian regimes to undermine collective rights. Furthermore, she stated that she believes that a challenge to the religious foundation is possible if certain segments of the royal family can increase their power base and include minorities, because the current situation is not sustainable. Al-Khawaja confirmed that cultural relativism is frequently used as an excuse to accusations. However, even the references to religion 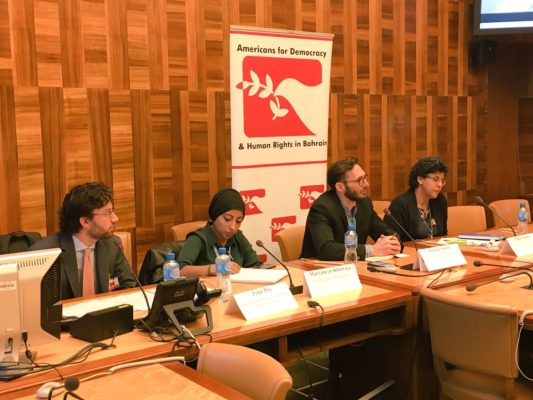 only justify current practices under a very particular interpretation, which illustrates the necessity of secularism. With regards to allies for Saudi women, al-Khawaja referred to the nexus of business and human rights, as the economic importance of Saudi Arabia shields its government from being held accountable. Pry underlines that women’s activism, and activism in general is not a recent phenomenon, but has been seen before in Saudi Arabia. If existing opportunities can be utilized to recover this energy, it will provide a good entry point to restart civil society and increase pressure on the government. Here, the Vision 2030 may be an opportunity for civil society to pressure the Saudi government to live up to its promises. Additionally, increasing integration of the Saudi economy in the global markets has the potential to increase female participation in the labor market, as partner companies may serve as role models.

In a second Q&A round, Smith posed the question how electoral democracies can put women rights in Saudi Arabia on their agenda and ensure sustained attention. Points raised by the audience concerned the relation between human rights and Sharia law, opportunities arising from prominent cases and increased use of social media, and future action.

Manea started her reply noting that most family laws in the Arab world are derived from Islamic laws, but there are observable differences regarding their progressive nature. These laws essentially link the obedience of women to men, and that such discriminatory issues have been seen in countries such as Switzerland in the past. What this shows is that women’s rights in Saudi Arabia is not so much a culture-religious issue as a patriarchal issue that can be changed through public opinion. However, in Saudi Arabia the dependency of the royal family on religious leaders constitutes a major obstacle. Nonetheless, change is possible if demanded by wide parts of the population, and such demand is growing right now in Saudi Arabia. With regards to social media, al-Khawaja notes that it creates both of opportunities and challenges. On the positive side, social media gives the opportunity of live-coverage and updates, but is also a tool for the government. 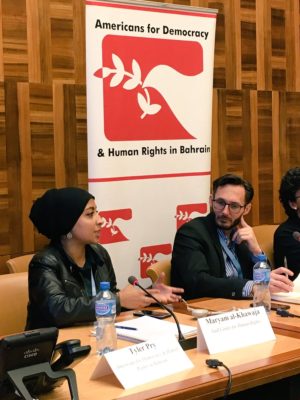 Against this background, she urges European countries to further discuss legal possibilities to restrict the export of spyware to repressive governments. In this sense, she advocates to overcome double-standards and encourages the EU to more frequently utilize its protection mechanisms for human rights defenders. Furthermore, she stressed the continuous engagement of women, who have been active on the forefront for many years. Pry underlined the possibility for activists to organize themselves and campaign through social media. However, he also noted that the government utilizes fake web-bots in order to skew the public discourse. Regarding future action, he stresses that the government has to be held accountable to provide a comprehensive mapping of guardianship restrictions, to enable the international community to identify and address specific issues.