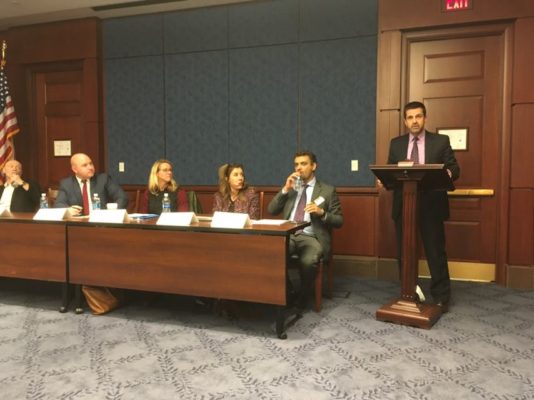 Mr. Jarrar, in his opening remarks, described the past few years as a “disastrous situation” for human rights in Bahrain, as documented in a report recently published by Amnesty International, among many other sources. He highlighted developments such as the restoration of the National Security Agency’s powers of arrest and the targeting of human rights activists. Nonetheless, Jarrar observed that there is potential for positive change in countercurrents such as the interest the new US ambassador to Bahrain, Justin Siberell, has shown in the information presented to him to date on Bahrain’s human rights record, and a number of congressional bills seeking to cut military aid to abusive Gulf allies.

Sarah Leah Whitson opened her remarks by noting that for the past several years Human Rights Watch has been forced to begin its annual report on Bahrain with the phrase, “The human rights situation continues to worsen.” She cited many disturbing developments in the 2016–17 period: the total elimination of al-Wefaq as an opposition political force, the shuttering of al-Wasat, Bahrain’s only independent newspaper, and the execution in January of three men who stated that the “confessions” presented at their trials had been coerced through torture. Prominent human rights defender Nabeel Rajab (who serves as an advisor to Human Rights Watch on Mideast issues) had been imprisoned for what would amount to “an ordinary day” of social media activity for politically active people in the US, Whitson observed. The EU and indeed even the US State Department have called for the unconditional release of Rajab, but at the same time the Trump Administration has lifted restrictions on military aircraft sales to Manama. Whitson concluded with the observation that, in the past, Bahrain had left open some civil space for independent voices, which had made the society overall a healthier and more open place. The fact that Bahrain was not always the same repressive place it is today proves that it need not be so in the future.

Prof. Vittori tailored her remarks to her area of academic specialization, which is the linkage between corruption and civil conflict. She pointed out that corruption is a powerful driver of domestic unrest as it corrodes popular trust in the government. This issue can also serve as a recruitment tool for extremist groups, and in fact has played such a role for ISIS, which has run an “exceptional campaign” of recruitment exploiting corruption as a widely shared grievance in the Middle East. Prof. Vittori argued that while corrupt regimes prefer co-optation as their first tactic, eventually they run short of money and turn to coercion and violence. Bahrain appears to be in this stage, given the rapidly escalating level of repression. Much about Bahrain’s military/security sector is unclear, she noted, as its budget figures are “highly suspect” and “what little we can find” indicates that Bahrain has exceptionally high levels of unaccounted-for security sector spending. It is a “highly predatory regime” running a  “highly brutal system,” she concludes, and the US is naïve to provide no-strings-attached military support in dealing with such a government. Due to the internal dynamics of corruption and now increasing use of force, she saw a strong potential for rapid security deterioration – induced by the ruling regime’s own counterproductive policies – in the country.

Michael Payne of ADHRB began by noting that the US is Bahrain’s primary military backer, supplying an estimated 85% of Bahraini armaments. Washington is thus a de facto partner to Bahraini policy and the human rights abuses which underlie it. Though this is justified on grounds of security, stability, and counterterrorism, Payne noted, the monarchy’s repressive policies are actually a key driver of extremism and intercommunal conflict, contravening the US interest in a more just and peaceful region. Though Shia Muslims are a majority of the Bahraini population, they are estimated to be represented at a level below 5% in the defense sector, while Sunni non-Bahraini nationals are believed to make up over half of the security forces. He highlighted the internal Bahraini military publication Nur al-Sunna, obtained and translated by ADHRB, which evinces an aggressively chauvinist and sectarian ideology, even including justifications for violence against non-Sunnis. The government’s sectarian discrimination in Bahrain has been recognized even by Secretary Rex Tillerson’s State Department. Nevertheless, the Trump Administration has moved to increase arms transfers. Payne made the point that removing all conditionality on major foreign military sales items like the F-16 aircraft deal will in fact undo US influence, which might be leveraged for reform. As it stands, US policy “risks directly arming and abetting sectarian extremism and repression in Bahrain.”

Dwight Bashir of the US Commission on International Religious Freedom, who has just returned from a fact-finding visit to Bahrain, anticipated a widening political gap between opposition and government in the country, unfortunately reflecting and being exacerbated by sectarian tensions. He noted that US policy towards Bahrain is dominated by a fixation with Iran, but that this narrative has emerged with particular force only in the past few years. Bashir believes the current moment represents a “watershed period” in which “increased extremism” is emerging on both Sunni and Shia sides of the political divide. Though he believes Iran has played a destructive role in Bahrain’s domestic politics, he noted that “legitimate security concerns” are being stretched to clamp down on “peaceful dissent,” and he now hears from Bahraini officials that “al-Wefaq is an agent of Iran,” though such claims have not been accompanied by persuasive evidence. Bashir did not see positive domestic prospects for reversal of the trend towards sectarianization. “The only way we’re going to move forward,” Bashir said, is with “a consistent message” from both the Departments of State and Defense, as opposed to the current policy which sees diplomatic criticism from the State Department while support continues to flow from the Defense Department side.

Brian Dooley of Human Rights First started his remarks with a personal recollection of the release of the report of the Bahrain Independent Commission of Inquiry in 2011. (This month marks the sixth anniversary of that landmark report.) At that time, he noted, he had been in Bahrain and had met with dissident political leaders to discuss the prospects for the country. Today he is banned from entering Bahrain and those dissidents (such as Nabeel Rajab and Zainab al-Khawaja) are either jailed or in exile. Though emphasizing that Bahrain bears ultimate responsibility for its own domestic policies, Dooley argued that the US has failed to hold Bahrain accountable over the disappointing years since 2011. He extended those remarks to the many international charitable and technical agencies that entered Bahrain during the Arab Spring with the mission of assisting in the kingdom’s announced intentions to “reform.” Seen now in hindsight, the announced goal was evidently a charade, and the efforts of outside actors – even though often sincere – have been a failure. Yet there has been no accountability and seemingly few lessons learned, Dooley believes.

Ultimately, the panel provided a thorough overview of the current state of US-Bahrain security relations and offered a number of interesting angles from which to view the human rights crisis in Bahrain. Underlying structural factors such as corruption seem to have received little consideration in US policy circles as yet, and the social polarization engendered by the monarchy’s current course is among the most worrying longer-term developments in the Gulf region today. ADHRB hopes that the US government, both at the executive and congressional level, will heed such messages and work to push for moderating reforms, rather than accepting the disingenuous claims to progress made by the Bahraini authorities as they continue to intensify repressive measures and stoke internal division.