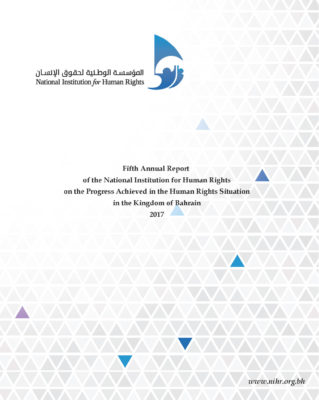 On 28 March 2018, Bahrain’s National Institution for Human Rights (NIHR; also referred to as the B-NIHR and BNIHR) submitted its 2017 annual report “on the Progress Achieved in the Human Rights Situation” to the king. It is the NIHR’s fifth annual report since its establishment as a semi-independent oversight mechanism in 2009, and the first since the king reorganized the institution in late 2016 and early 2017. Like its predecessors, the 108-page document provides an overview of the NIHR’s three primary functions during the last year: 1) its advisory opinions issued to the two houses of the National Assembly and the government; 2) its efforts to “promote and protect” human rights through training, complaint resolution, and site inspections; and 3) its open-ended assessment of the “Main Issues of Direct Impact on the Human Rights Situation.”

Despite the NIHR’s reorganization, however, the report demonstrates that the institution continues to lack the necessary will or independence to objectively and comprehensively assess the state of human rights in Bahrain. The NIHR remains closely connected to the government and it has failed to fully comply with the international standards governing national human rights institutions, known as the Paris Principles. These deficiencies are reflected in the report, which not only omits the vast majority of major human rights developments and violations of 2017, but also indicates that the institution declined to exercise its authority to address these issues with the government. While the report does make some welcome observations and policy recommendations – particularly concerning the rights of expatriate/migrant workers and the relevant international conventions – these are undercut by the NIHR’s outright endorsement of political and civil rights abuses. Likewise, the report provides incomplete and misleading information on the institution’s complaint and inspection programs.

The NIHR report directly supports or minimizes clear human rights abuses like the January executions; the two lethal raids on the Diraz sit-in; and the persecution of Nabeel Rajab, Sheikh Isa Qassim, and Ebtisam al-Saegh.

Although 2017 was one of the single worst years for human rights in Bahrain since 2011, the NIHR’s report presents only ostensive progress and government success – a picture at complete odds with reality. Specifically, the report focuses almost exclusively on describing Bahrain’s positive legislative and theoretical commitments to human rights – including lengthy parallel descriptions of their foundations in international law – while neglecting to assess the practical implementation of these laws or their impact on the actual enjoyment of human rights. It simultaneously ignores abusive legislation, despite its mandate to evaluate such policies, as well as the range of core human rights violations endemic to the kingdom, among them torture, arbitrary detention, political repression, and religious discrimination. The report includes the word “torture” just eight times: six in reference the title of the Convention against Torture and Other Cruel, Inhuman or Degrading Treatment or Punishment; once in reference to International Day in Support of Victims of Torture; and once while paraphrasing the International Covenant on Economic, Social and Cultural Rights. Religious discrimination is similarly neglected, mentioned only in the context of international agreements, while systematic arbitrary detention and due process violations are equally disregarded. The NIHR fails to directly address these issues in any capacity, despite consistent and extensive documentation of such abuse by the United Nations (UN) Special Procedures.

Ultimately, the NIHR focuses almost entirely on what it interprets as positive reform efforts, abrogating its mandate to report accurately and thoroughly on human rights violations. At its worst, the fifth annual report uncritically praises laws, policies, and institutions that have contributed to the persistence and escalation of human rights abuses in Bahrain during the period under review.

Americans for Democracy & Human Rights in Bahrain (ADHRB) has analyzed the NIHR’s fifth annual report, focusing on the institution’s activity in 2017 and a selection of key advisory opinions and decisions documented in the report. Our analysis does not assess every action reported by the NIHR; rather, it highlights some of the NIHR’s most problematic positions, in its own words. It then briefly assesses the adherence of these positions with international human rights standards in the context of Bahrain’s worsening human rights situation.