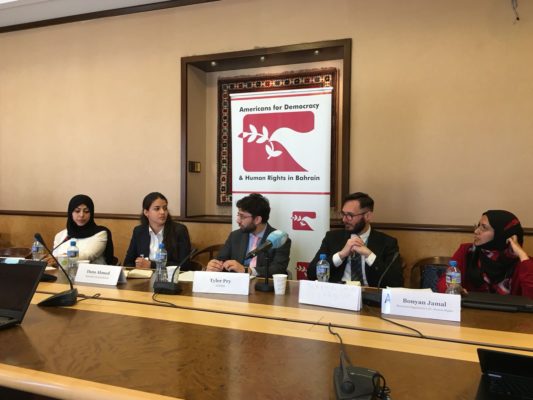 On Thursday 21 June, Americans for Democracy & Human Rights in Bahrain (ADHRB) hosted a side event at the 38th Session of the United Nations Human Rights Council, in cooperation with Amnesty International, the European Saudi Organisation for Human Rights (ESOHR), the Cairo Institute for Human Rights, AlQst, the European Centre for Democracy and Human Rights (ECDHR), and Mwatana Organization for Human Rights. The panel was moderated by ADHRB’s Advocacy Associate Tyler Pry, and featured Bonyan Jamal from Mwatana, Dana Ahmed from Amnesty International, Zena Tahir from ESOHR, and Jeremie Smith from the Cairo Institute as panelists. Over the course of their remarks, the panelists addressed human rights abuses perpetuated by Saudi Arabia both domestically as well as regionally, highlighting the arrest of peaceful Saudi activists and deployment of executions as a political tool, in addition to rights abuses in Yemen by all sides to the conflict and what the international community can do to end the conflict. 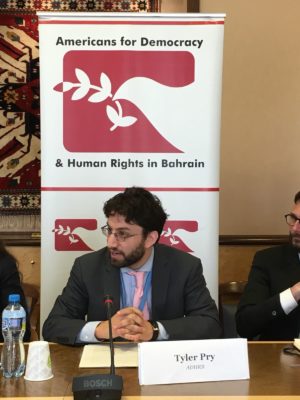 Mr. Pry opened the panel, raising Saudi Arabia’s domestic and regional human rights violations. He highlighted in particular the recent arrests of women’s rights defenders ahead of the lifting of the ban on women driving, and capital punishment. He also described the role of the Saudi-led coalition in the war in Yemen, noting the coalition’s attack on Hodeidah and the disastrous effects this will have on Yemen’s humanitarian crisis and the potential for further suffering on a catastrophic level, because attacking the port that imports 80 percent of Yemen’s necessary goods will have a ripple effect against civilians. Mr. Pry stated that the attack on Hodeidah is symbolic of Saudi Arabia’s approach to the war in Yemen, and approach characterized by attacks on civilian areas, the disruption of humanitarian and medical aid, and the disregard for the lives of non-combatants. Mr. Pry stated that neither side of the conflict is blameless, but that there is no excuse for violations of international humanitarian law, nor can there be a justification for the use of famine as a weapon. He concluded his opening remarks by noting that one of the questions the panel will discuss is the role the Human Rights Council can play in addressing these violations. 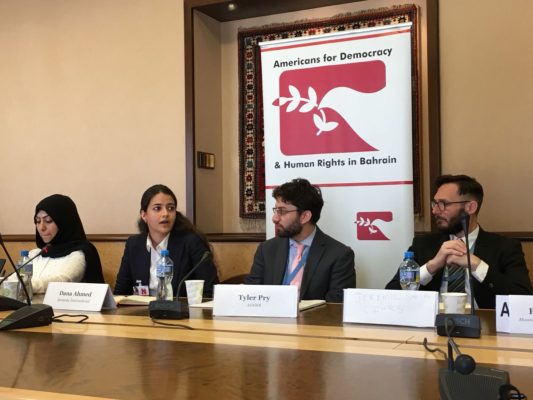 Dana Ahmed began the conversation with a discussion of abuses that Saudi Arabia commits against its own citizens. She raised the upcoming lift of the ban on women driving and emphasized that the credit for this historic moment belongs to the human rights defenders and activists who are currently being detained. These women campaigned for both the right of women to drive, as well as the end of the male guardianship system. Thus, their arrests at this time of nominal reform represents one step forward, two steps back for women’s rights in Saudi Arabia. In this vein, she highlighted the cases of three women human rights defenders who have been detained without charge since May 2018, who have been interrogated without the presence of their lawyers, been prevented from access to their families, and been accused of being traitors to their country in a vicious smear campaign in the media. With all of these charges against them, these women are at risk of being sentenced to 20 years or more in prison. Ms. Ahmed noted the attempts by Crown Prince Mohamed bin Salman to present himself as a reformist, but stated that genuine reforms cannot occur when the government silences the people who advocate for these changes. 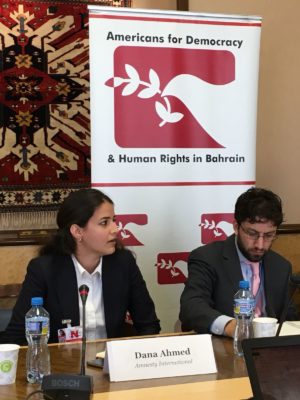 Ms. Ahmed also highlighted the recent negative political and legal reforms, including the redistribution from power away from the Ministry of Interior to the Presidency of State Security, and the use of the 2017 Counterterror law to convict activists. She noted in particular the recent report of the Special Rapporteur on the promotion and protection of human rights and fundamental freedoms while countering terrorism, which states that under Crown Prince Mohammed bin Salman, this is the most ruthless crackdown on dissent that the country has faced in decades, with no space for civil society and the freedoms of expression, association, and assembly. She concluded that genuine reform must begin with release of political prisoners, and that the international community must speak out at the Human Rights Council and other fora to support the human rights defenders in Saudi Arabia.

Ms. Tahir began her remarks by noting that this conversation would be impossible inside Saudi Arabia due to the crackdown on civil society and dissent. Her comments focused on the use of the death penalty in Saudi Arabia. She noted that Saudi Arabia is one of the countries with the highest uses of the death penalty in the world. In 2015 the kingdom executed 157 people. In 2016 the kingdom executed 154 people., and in 2017, Saudi Arabia executed 146 individuals. After noting these statistics, she echoed the language of the Special Rapporteur on counter-terrorism, stating that Saudi Arabia is “wedded to a cult of execution.” 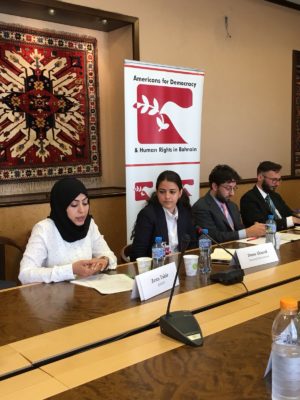 Ms. Tahir also pointed out the trend of politically motivated death sentences that have been carried out since the Arab Spring in 2011 as well as the subsequent crackdown in the Eastern Province. In describing the clampdown on the Eastern Province and executions of dissidents there, she highlighted the role played by the Specialized Criminal Court, the kingdom’s counter-terror court system that was originally intended to try terrorists, but is now being used to try dissidents and activists. Here she raised ESOHR’s work, noting how the organization has documented a number of cases in which procedural safeguards like fair trials were not observed and defendants suffered from the lack of access to legal counsel and the lack of an independent judiciary. She noted the increase in the executions in 2016, and raised Sheikh Nimr-al-Nimr’s case and the cases of three other peaceful protestors, including one minor. Then, a year later, in 2017, Saudi Arabia executed four protestors on political crimes. In addition to these cases, the kingdom has carried out mass trials where the defendants were sentenced to death, including a trial of 14 men sentenced to death on bogus terror charges stemming from their activism in Awamiyah in 2016. Among the men is Munir al-Adam, who was tortured so severely that he permanently lost hearing in one ear. Then in 2017, a further 12 men were sentenced to death for allegedly spying for Iran. Ms. Tahir noted that despite the international absolute prohibition on death penalty for minors, there are currently eight minors on death row, with one minor previously executed. Ms. Tahir closed her remarks by stating that the Saudi government uses state media to further their arms, and also uses the Human Rights Council to misrepresent the situation in the country, and validate their claims of anti-terrorism. 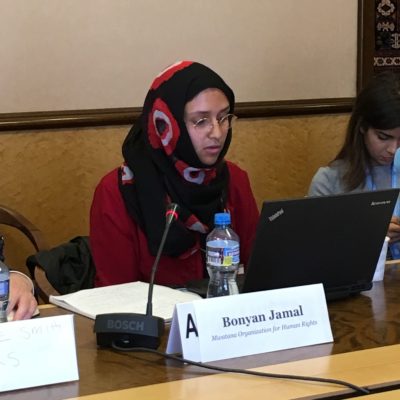 Ms. Jamal followed Ms. Tahir and talked about the situation of human rights in Yemen. She began by providing some background on Mwatana and the work that they do in Yemen’s 18 provinces documenting human rights violations committed by all parties to the conflict. Their activities include advocacy, lobbying, and legal support in seven governorates. In Europe, the organization focuses their efforts on legal challenges to major arms deals in which European companies manufacture and sell weapons to both sides of the conflict. Ms. Jamal then discussed Mwatana’s 2017 Annual Report, laying out comprehensive rights violations by all sides. She focused in particular on the use of starvation as a war tactic; attacks on the civilian population; indiscriminate ground attacks on civilians including the use of land mines; enforced disappearances; torture; arbitrary detention; violations against religious minority populations; violations against journalists; recruitment of child soldiers; attacks on hospitals; attacks on schools; drone attacks; and a December 2017 clash between Houthis and the Saudi-led coalition which resulted in multiple rights violations.

In her discussion of rights violations, Ms. Jamal gave out several specific figures, highlighting that Mwatana reported 26 incidents of denying access to humanitarian aid during 2017, and 89 attacks on civilian population by the Saudi/UAE coalition forces, in which 357 civilians were killed. Ms. Jamal noted that the coalition forces targeted houses, markets, schools, farms, and fishing boats. Mwatana reported torture perpetrated by both Houthi and Saudi forces, resulting in 17 deaths in 2017 alone. They also reported 18 attacks on hospitals and the recruitment of 879 child soldiers. Ms. Jamal closed her remarks by advocating for peaceful dialogues to reach peaceful resolution, and noted that all parties to the conflict have committed these violations, and should all be held accountable for these violations. 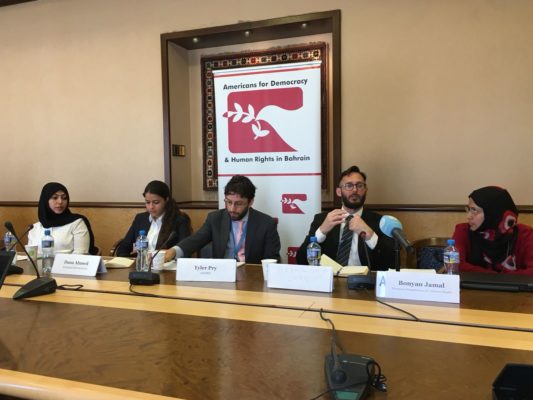 In his remarks, Mr. Smith stressed the significance of an international investigation with respect to the situation in Yemen. He highlighted how unlawful behavior on the part of certain actors is creating the largest humanitarian crisis in the world, with the lives of nearly 22 million people threatened on account of the political interest of a handful. While countries such as the United States, United Kingdom, and France continue to oppose investigations into the use of weapon contracts, the principled stand taken by Canada, the Netherlands, and a small group of other states resulted in the passage of a resolution in the Human Rights Council last year to establish a group of experts to investigate these unlawful acts in Yemen. This was recognized as a crucial mechanism serving to ensure the practice of international humanitarian law in relation to the Yemeni conflict. This resolution will be up for extension in the Council again in September 2018, and Mr. Smith highlighted Saudi efforts to prevent this from occurring, including through economic threats. He emphasized the need of civil society organizations and States to ensure that this coercion will not affect the outcome of the Council – “It is up to us to remain committed and pay attention.”

The question and answer session first looked at issues of increased involvement of the international community with respect to the conflict situation in Yemen, the supply of weapons, engagement in peaceful dialogue for ending the conflict and increasing accountability, as moves towards ensuring an end to the conflict. It was highlighted that in addition to a serious dialogue between all Yemeni parties, a conditioning and control of the weapon supply, by both the armed forces and the government, needs to be a primary focus. It was also noted that the nature of the Yemeni conflict is one which is leading to the ‘de-development’ of the country, and this instability is bound to affect Saudi Arabia. With respect to accountability and the role of international community, it was pointed out that a principled stand by just a few countries, as has been demonstrated previously by Germany, Belgium, etc., can make a significant difference in the lives of those directly affected by the conflict. A question on the nature of reforms being introduced by the Crown Prince was also raised, and it was stressed that all reforms need to start with a respect for human rights. The current reforms were described as being superficial in nature aimed at portraying a positive image to the international community while the situation on the ground remains the same with people still disallowed from expressing their opinion and denied their rights. 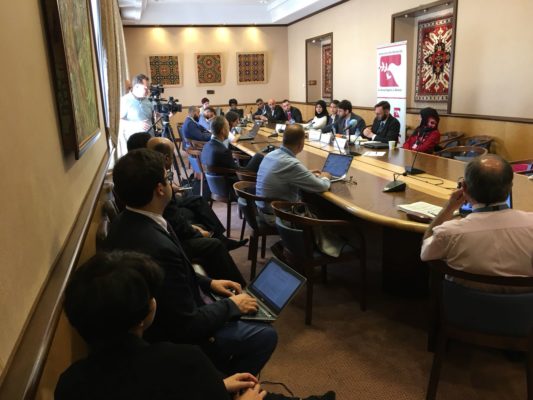