In recent months, Saudi Arabia has seen gains in the realm of women’s rights as the infamous driving ban on women was lifted. This step was hailed has a monumental achievement in the kingdom – one that is known for severely limiting civil society and, more particularly, women. However, this progress has remained tainted by the highly repressive male guardianship system that continues to give men the power to control a variety of critical decisions in a woman’s life. Female Saudi activists have fought for years for the right to drive, for an end to the male guardianship system, and for other basic human rights, not just in Saudi Arabia, but also internationally. One of these activists is a street artist known as Ms Saffaa, whose art serves as a medium for her activism, in conjunction with a budding grassroots movement protesting the guardianship laws.

Ms Saffaa, originally born and raised in Saudi Arabia, currently resides in Australia. There, in addition to pursuing her studies, she uses her art to position herself and other Saudi women at the center of the dialogue on conditions and restrictions Saudi women face. One of her primary goals is to raise international awareness of the intersection of Saudi Arabia’s gender inequality and the brave Saudi women advocating for their rights despite the threat of reprisal. Advocating for human rights, organizing peaceful protests, and speaking critically of the government are considered crimes that can be punishable by death in Saudi Arabia. Many Saudi women have been imprisoned for their activism, including Samar Badawi and Naseema Alsada. Activist Israa al-Ghomgham is even potentially facing the death penalty for her peaceful activism. 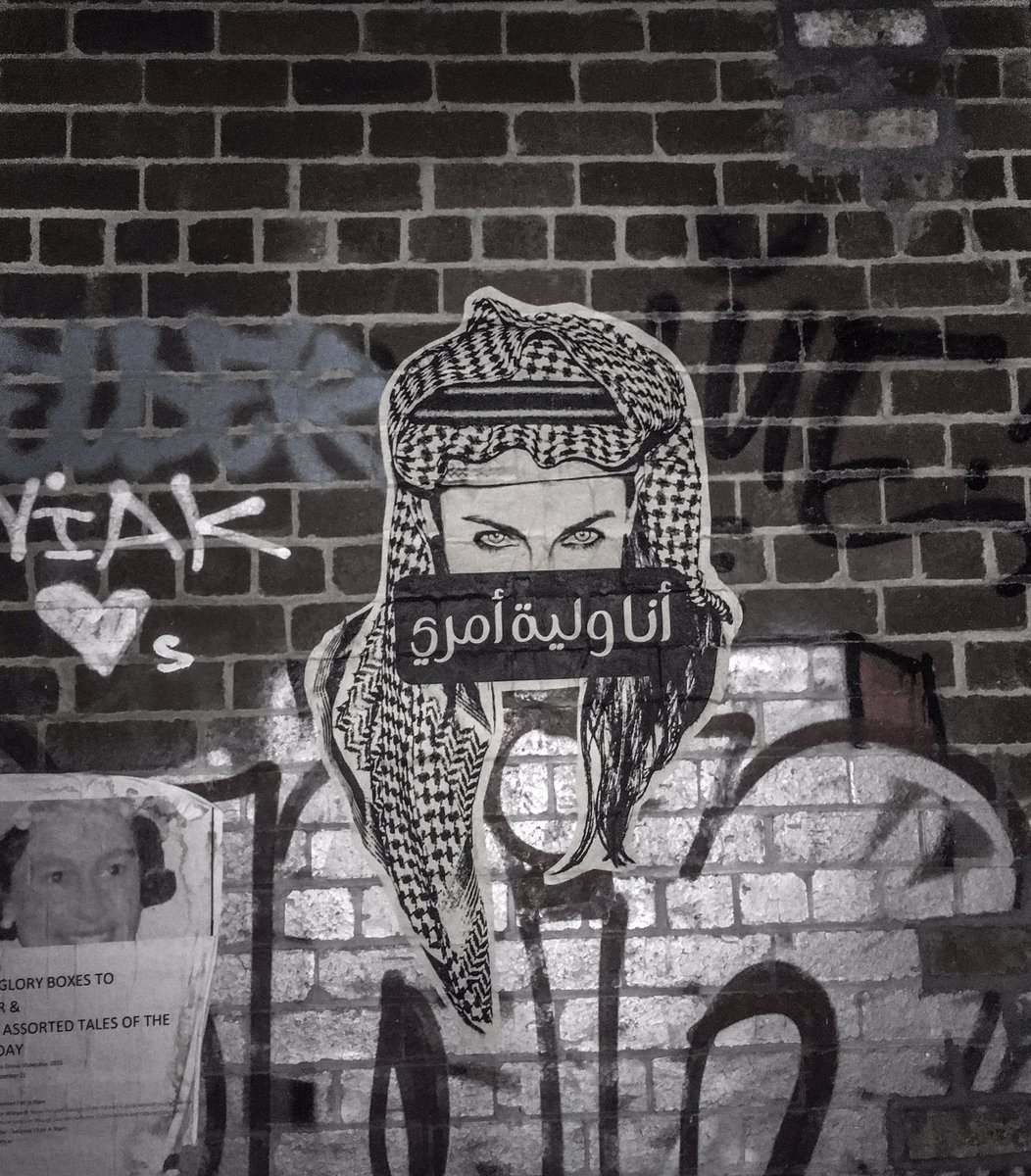 Motivation for the work of Ms Saffaa also stems from the frustration she feels in seeing the misrepresentation of Saudi women as victims by international media, rather than as agents with self-determination. One of her most iconic pieces depicts a woman wearing a shemagh – a headscarf traditionally worn by men – which instantly sparked controversy as soon as it was made public. Through this depiction of women, Ms Saffaa incites viewers not only to question arbitrary gender roles and restrictive traditions, but to also reflect on women’s empowerment in Saudi society. Ms Saffaa highlights the shemagh as a symbol of power,  and in her piece shows the power of women in Saudi society by adorning the woman with a shemagh. The lower half of the woman’s face is covered by the message “I Am My Own Guardian.” This piece has become inextricably associated with the #IAmMyOwnGuardian movement – an international campaign to raise awareness of the Saudi male guardianship system and advocate for women’s rights. The hashtag associated with this movement offers a platform for discussion on the obstacles facing Saudi women and human rights activists. Unfortunately, due to the severely repressive laws that inhibit freedom of expression, including broad counterterrorism laws, women and human rights activists alike face extreme institutional barriers in enacting political reform within Saudi Arabia. 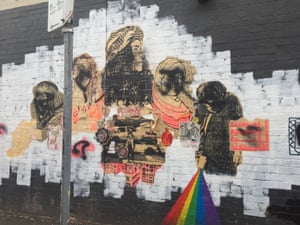 Ms Saffaa’s work is highly valuable to the women’s rights movement. Not only does she have a significant online presence via social media, but she has also been commissioned to participate in campaigns to further raise awareness of human rights abuses in Saudi Arabia while she resides in Australia. However, while the controversial nature of her artwork draws attention and evokes discussion, it has also been the target of vandalism. In Melbourne,  Ms Saffaa collaborated on a feminist protest mural depicting the likenesses of notorious female Saudi artists and activists. In February 2017, the mural was defaced. It is suspected that the vandalism was motivated by islamophobia, especially as anti-Muslim sentiments have been rising and hate crimes targeting Muslims have increased internationally. At this, Ms Saffaa described the continued obstacles of Saudi women, saying “you have to fight the misogynist men back home and the islamophobic racist bigots in this country.” 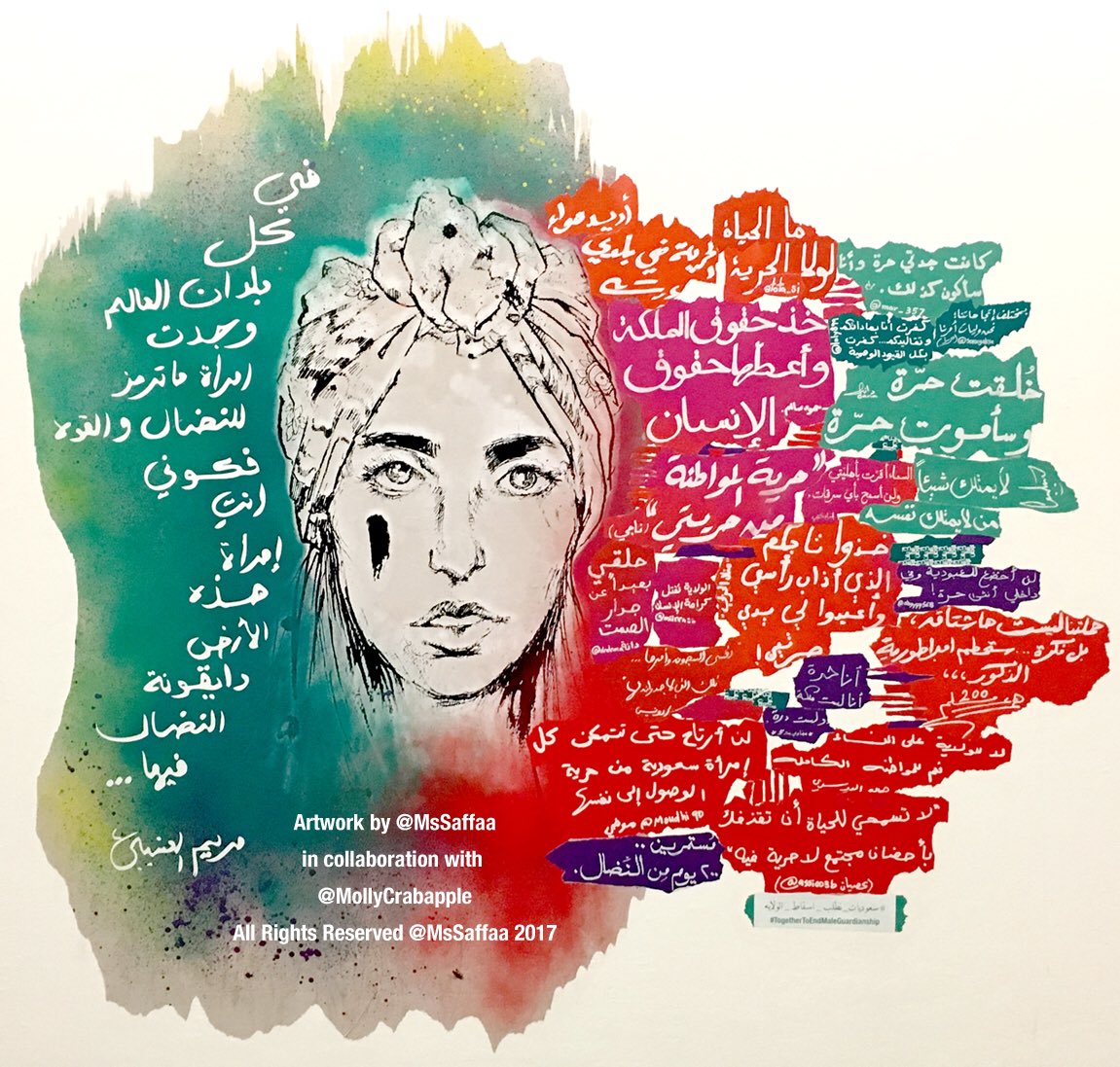 Despite these challenges, Ms Saffaa’s work goes on. Her artwork is most recently being featured in an exhibition titled “Landless Bodies” that opened on 5 October 2018. It explores the experiences of female identity and culture, independent of geographic and temporal confines. The #IAmMyOwnGuardian movement is ongoing and remains just as important as ever as the Saudi Crown Prince has arrested, arbitrarily detained, and continues to suppress the very women who fought, and continue to fight, for advancements in women’s rights. Ms Saffaa’s work, among the work of other activists, publicizes Saudi Arabia’s abuses and restrictions to the international community and plays a fundamental role in the rights movement by Saudi women, for Saudi women.