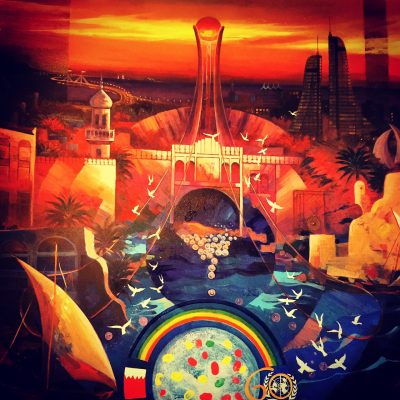 In 2005, Bahrain donated a painting of the historic Pearl Roundabout by renowned Bahraini impressionist painter Abbas Al Mosawi to the United Nations Human Rights Council (UNHRC) in Geneva, Switzerland. The Roundabout monument, depicted in the painting, was initially built in 1982 to commemorate the third summit of the Gulf Cooperation Council (GCC), with the pearl representing Bahrain’s notable pearl farming industry.

Decades later, the Pearl Roundabout became a prominent symbol of Bahrain’s peaceful pro-democracy movement when, in 2011, several thousand protestors made their way to the monument in Manama with calls for democracy and reform. In response, the Bahraini government called on security forces to move in and unleashed a violent crackdown on the demonstrators. The crackdown on peaceful protestors resulted in countless arrests, injuries, and even dozens of deaths at the hands of Bahrain’s security forces.

Following the crackdown, the Bahraini government went so far as to destroy the Pearl Roundabout for fear of what it now symbolized, and reopen it as the Al-Farooq Junction years later. The government continued to remove all memory of the monument from the public eye, pulling the 500 fils coin engraved with the Roundabout out of circulation, and removing any likeness of the Pearl Roundabout from postcards and government websites. Since the monument was destroyed in the aftermath of the crackdown, graffiti depicting the monument has appeared in towns and villages across Bahrain, but is quickly painted over. 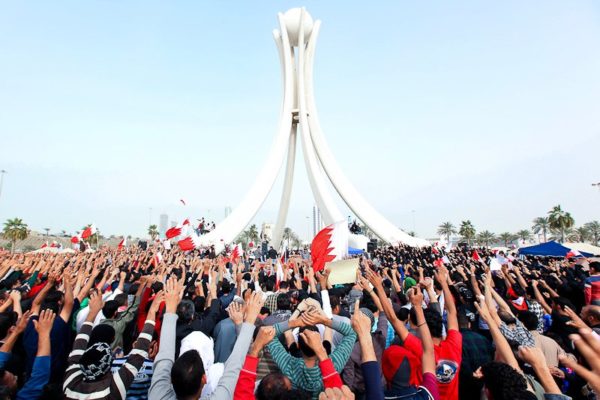 After the 2011 protests, the Bahraini delegation even asked the Human Rights Council to return the gifted painting featuring the Roundabout, which the Council declined. Instead, the painting continues to hang just outside the Council doors, serving as a symbol of Bahrain’s struggle for human rights that cannot be erased by the government

The Roundabout’s destruction and erasure from the public eye were enough to raise the concern of multiple UN Special Procedures in 2014. Special Rapporteurs on the promotion and protection of the right to freedom of opinion and expression; on the rights to freedom of peaceful assembly and of association; and in the field of cultural rights sent a joint communication to Bahrain raising concerns over the removal of public space and memory of the movement, but Bahrain neglected to reply.

Joshua Meyers is an Advocacy intern with ADHRB.