On 30 September 2018, the High Elections Committee issued an “edict” laying out procedures through which “civil society institutions” may apply to serve as election monitors. Groups have until 5 November to submit written requests to the Ministry of Justice and Islamic Affairs (MOJ), which runs the High Elections Committee and oversees the election process. Approved groups are permitted to work under the supervision of the High Elections Committee to track any violations, focusing on polling regulations and the behavior of candidates, political societies, non-governmental entities, and voters. Individuals selected to represent civil society institutions must “be Bahraini nationals, have a good reputation and politically unaffiliated.”

At the same time, the authorities have actively cultivated semi-official and strictly pro-government groups – known as government-organized NGOs (GONGOs) – that are funded or otherwise sponsored by state institutions and do not face the same restrictions as independent civil society actors. The government typically does not apply the same restrictions on association to GONGOs, and many contain government officials. These “civil society institutions” are then listed as “politically unaffiliated” and of “good reputation” by government agencies like the MOJ.

On 1 October 2018, one of the first formally approved election monitoring groups called on the authorities to suppress nonviolent criticism of the election process as “political terrorism.” Faisal Fulad of Nazaha Elections Monitoring 2018, a subdivision of the GONGO Bahrain Human Rights Watch Society (BHRWS), made the statement in a government-affiliated newspaper, likening supporters of boycotting the elections to terrorists. Specifically, Fulad leveled allegations against Ali al-Aswad, a former member of parliament for the now dissolved Al-Wefaq opposition society who tweeted about boycotting the vote: “We respect Mr Al Aswad’s decision to the boycott the election, as it is his personal choice [sic],” said Fulad, omitting the fact that al-Aswad and thousands of other members of opposition societies are now legally barred from running for office, “But his volatile tweets instigate people in Bahrain against the government and he is trying to influence voters and candidates alike, which is a serious violation.” The election monitor went on to threaten legal action if it finds “evidence of people reacting to his tweets.” Fulad is a former member of Bahrain’s royally appointed upper house of parliament, and the BHRWS was cofounded by the kingdom’s former ambassador to the United States.

Al-Aswad lives in exile in United Kingdom, and he is one of two Al-Wefaq leaders tried in absentia along with the group’s imprisoned Secretary-General Sheikh Ali Salman on charges of espionage for allegedly communicating with Qatar. All three were acquitted of the charges, but the Public Prosecution Office is appealing the verdict and continues to seek the death penalty.

The High Election Committee’s call for civil society monitoring is completely disingenuous in the absence of serious reforms to foster independent groups, decriminalize critical activism, and release prisoners of conscience. Official endorsements for quasi-governmental organizations that are urging crackdowns on peaceful free expression as “political terrorism” further intensifies the restrictive environment ahead of the vote, undermining the legitimacy of both the monitors and the electoral process. As yet, there are no independent institutions set to monitor Bahrain’s elections. 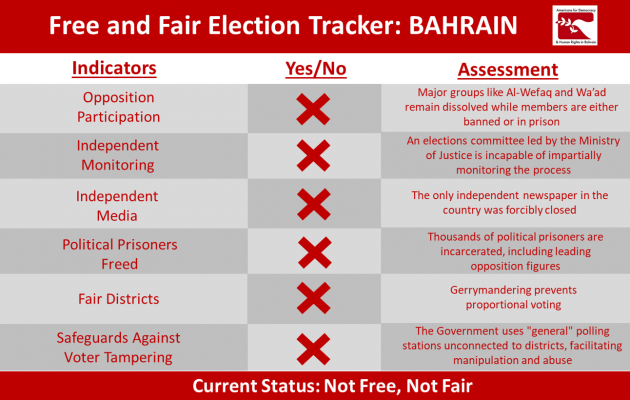