14 March 2019 – Today, during the 40th session of the United Nations (UN) Human Rights Council (HRC) in Geneva, Americans for Democracy and Human Rights in Bahrain (ADHRB) hosted a side event to discuss the ongoing human rights abuses and the political status of the conflict in Yemen. The event was co-sponsored by the European Centre for Democracy and Human Rights (ECDHR), CIVICUS, Article 19, Women’s March Global, and Arabian Rights Watch Association (ARWA). ADHRB’s Advocacy Officer moderated the event, with remarks from Mohammad Alwazir and Ahmed Alshami of ARWA; Abdulqader Almurtadha, the Head of the Prisoner Exchange Commission on the Sana’a side; Dr. Aiman Al-Mansor of Insan Organization; and Bridget Quitter of ADHRB. 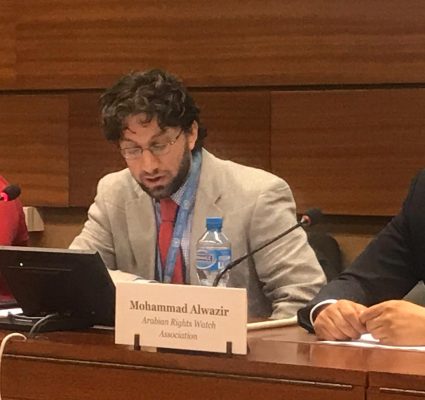 Mr. Pry of ADHRB introduced the human rights situation in Yemen, which has deteriorated into “one of the worst humanitarian crises” in which thousands have died, and many millions suffer from famine, poverty, and shortages of food and aid as a result of the military blockade surrounding the port of Hodeida. Pry noted that there have been numerous violations committed by both sides of the conflict, including violations of humanitarian law and principles, such as the targeting of civilians. Pry noted that ADHRB invited the other side of the prisoner exchange to provide remarks as well, but received no response, and lamented that this means we only hear one half of the conversation. Pry then turned discussion to the panelists.

Mohammad Alwazir of ARWA described the reality of Yemeni people, who have been living in “the worst humanitarian crisis since the Second World War.” He described the different political steps that brought the situation to its current moment. Alwazir recalled the 2011 popular uprising, how thousands of people took to the streets asking for political, social and economic changes, including a decentralized state, an equal and fair political system including public welfare and employment, the end of the conflict ravaging the northern and southern part of the country, a firm fight against corruption and the elevation of the war on terror to the national agenda. This movement ultimately led to a political process that could have brought about the establishment of a Republic and enabled the pursuit of the desired political, economic, and social agenda.

Alwazir also focused on the other political process that started in the same year: under the Gulf Cooperation Council’s initiative, a transitional period was agreed on, in which the country would be led by president Abd Rabbu Mansour 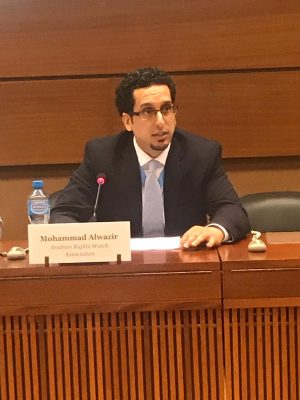 Hadi, who should have drafted a new constitution and organized new elections. However, as Alwazir explained, he did not achieve these goals. On the contrary, he prolonged his power until 2015, without any involvement or support of the Yemeni Parliament. Alwazir noted that when a pivotal agreement among different factions was reached to form a technocratic government in 2014, Hadi further extended its control over these institutions. In February 2015 he resigned and fled to Saudi Arabia, where he asked for external military support to “protect Yemeni people from the Houthi militia.” As a result, Saudi Arabia, Bahrain, the United Arab Emirates, Egypt, and Qatar among other states launched a military operation in Yemen with the support of Western countries including the United States, United Kingdom, and France. Finally, Alwazir explained the dire consequences of the blockade imposed on different ports of Yemen is having. This blockade, which was publicly stated as necessary for security purposes, has instead turned into arbitrary restrictions and delayed access for severely needed items, such as food and humanitarian aid. All of this represents a serious violation of human rights law and a crime against the Yemeni people, because it is contributing to worsen the food emergency and famine that the country is experiencing.

Ahmed Alshami of ARWA provided remarks via a pre-recorded video on the humanitarian situation on the ground in Yemen. He underlined the importance of the work of the UN Special Envoy to push a consultation among the parties involved on the ground of the humanitarian considerations. He welcomed the political consultations held at first in Geneva and later in Stockholm to set up a political framework that can lead to end the conflict. Then, Alshami explained the content of the diplomatic discussions the parties had in Stockholm. He noted that the parties agreed to only three items. Firstly, they agreed on the need for a ceasefire to reopen Hodeida, the most important seaport of Yemen, through which food and humanitarian aid are not allowed to enter. Secondly, they discussed the possibility of a prisoner exchange agreement in Jordan. Finally, they focused on the necessity to establish a political framework to discuss other issues such as the reopening of Sana’a’s international airport and the payment of salaries for civilian employees. Alshami concluded his remarks by showing the hope for new and more inclusive consultations that can help tackle the economic collapse and the humanitarian crisis that Yemen has been suffering from since 2011. 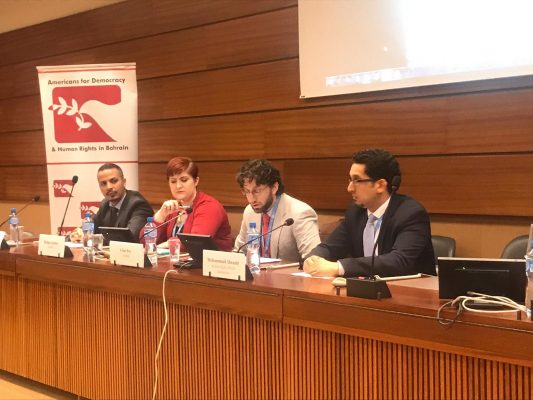 Abdulqader Almurtadha, the Head of the Prisoner Exchange Commission on the Sana’a side, also provided remarks via pre-recorded video, and focused on what he called the crimes committed by the coalition led by Saudi Arabia and United Arab Emirates. He explained that this military intervention – which occurred without any UN mandate – and the subsequent blockade of the country keeps  needed food and humanitarian aid from entering Yemen. He noted that Yemen depends massively on food import, so the blockade is ravaging the local economy and causing mass starvation. He commented that no possibility of free movement or travel can be guaranteed to the Yemeni population, as long as the blockade continues to be implemented. Almurtadha also denounced the intransigence of the Saudi-supported Yemeni representatives at the Stockholm discussions, which he claimed prevented the release of prisoners or any significant steps forward. He blamed this attitude as main reason behind the current impossibility of reaching an agreement that could improve, at least partially, the situation for the Yemeni people.

Dr. Aiman Al-Mansor of Insan Organization, a cardiologist, focused his remarks on the dire consequences of the effect on blockade on the economy and food distribution to Yemeni people. The blockade is delaying and preventing 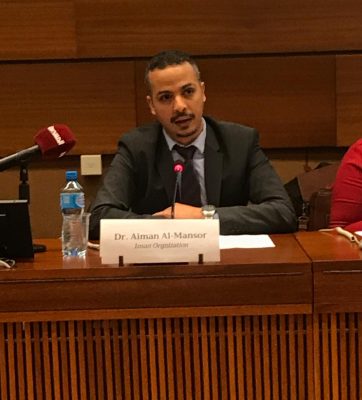 the entry of food, medicine, and fuel into the country. This blockade is in violation of international law, a fact noted by the Group of Eminent Experts, but the coalition has refused to remove it. As a result of the blockade, there has been a significant drop – 45 percent – in food imports. Given that Yemen imports 90 percent of its needs, such a decrease impacts many Yemenis. Over 12 million people now face death by malnutrition and preventable diseases, but because of the blockade, these go unaddressed.

The blockade is felt most particularly in the port city of Hodeida, through which 80 percent of imports to Yemen flow. But these have stopped completely in 2017, making effective treatment of preventable diseases and issues more complicated. This is doubly difficult because of attacks on hospitals and health centers – more than 330 medical centers have been targeted by airstrikes and others by ground fighting. As a result, 50 percent of the healthcare sector is inoperable, putting treatment out of the reach of many.

Al-Mansor noted that the objective of the Hodeida ceasire was to place a pause on the fighting and to create space for the flow of food, medicine, and fuel so as to address the humanitarian situation. But since the agreement, and despite the ceasefire, airstrikes and ground fighting has not halted. Rather, armed forces continued to attack necessary infrastructure like wheat silos. UN personnel have also been attacked. In this way, the goal of the ceasefire – ensuring a period of calm – has not been fulfilled.

Bridget Quitter of ADHRB addressed the issue of accountability in the conflict – how to ensure that individuals or states are held to account for their actions – according to the framework established by International Human Rights Law (IHRL) and International Humanitarian Law (IHL). She analyzed the main features of both systems, noting that IHRL is based upon universality or state consent to treaties and complaint mechanisms, and without such consent, the HRC and the international community have to rely instead upon customary international law established through state practice. 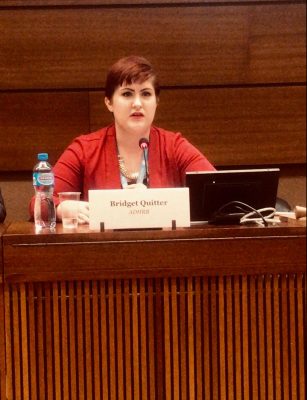 According to Quitter, while IHRL concerns the impact on human life and offers broader protection, IHL is concerned more with whether this impact outweighs other concerns – in other words, human suffering is unavoidable in situation of conflicts, but should be limited. Moreover, while human rights law holds that civilian deaths are impermissible extrajudicial killings, IHL holds that civilian casualties, while they should be avoided if possible, are permissible to a certain extent – provided that the number of deaths do not outweigh the military advantage, that the civilians are not directly targeted themselves, or that certain inhumane methods were not employed to direct the attack.

Quitter noted that the most concrete and binding form of accountability for perpetrators is based on the International Criminal Court (ICC) or other temporary courts set up by the UN system. However, these systems can only work if the state of the perpetrator has consented to the ICC having jurisdiction, by signing and ratifying the Rome Statute, or if the offending state asks for a Special Tribunal or Specialized Court to be set up by the UN, with both international and domestic actors participating in the adjudication.

Finally, Quitter mentioned other two theories through which accountability in the conflict in Yemen can be pursued: universal jurisdiction and Responsibility to Protect (R2P). Under universal jurisdiction, states can exercise jurisdiction over the perpetrator of certain, regardless of nationality or connection to the events. Universal jurisdiction can be exercised for war crimes, crimes against humanity, genocide, and torture. Under R2P, the primary responsibility for protection of individuals on its territory falls to a state; however, when the state is either unwilling or unable to protect, the international community has an obligation to intervene – including through diplomatic, humanitarian, and even military means. Quitter noted that R2P would rely on either state consent or Security Council resolutions to take action, and that most measures would be rejected by some of the permanent members for political reasons, including security arrangements, arms sales, and even direct support for the conflict.

In conclusion, according to Quitter, whether the conflict is examined through a human rights law lens, or that of international humanitarian law, the lack of political will to ensure accountability is going to cause these actions to ultimately fail, unless States treat their human rights obligations as mandatory and binding, and more important than political considerations.

The panel concluded with remarks by Pry, Alwazir, and Quitter in response to questions from the audience, in which Quitter noted that violations of international law have occurred on both sides, and that in principle, human rights law and humanitarian law would apply regardless of the perpetrator to protect civilians. She and Alwazir noted that current shifts in the US Congress and the Human Rights Council have shown that political will to end the conflict may be developing, and that NGOs and concerned states should continue their efforts to ensure this political will materializes into and end to the conflict and accountability for perpetrators. 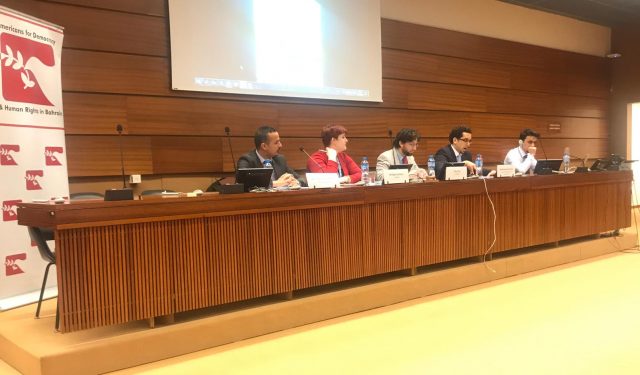