Americans for Democracy & Human Rights in Bahrain (ADHRB) and the Bahrain Institute for Rights and Democracy are pleased to release Breaking the Silence: Bahraini Women Political Prisoners Expose Systemic Abuses, which examines the cases of nine former and current women political prisoners in Bahrain from the moment of their arrest through their interrogation, trial, and detention. See the introduction to the report below, and click here to read the full report. 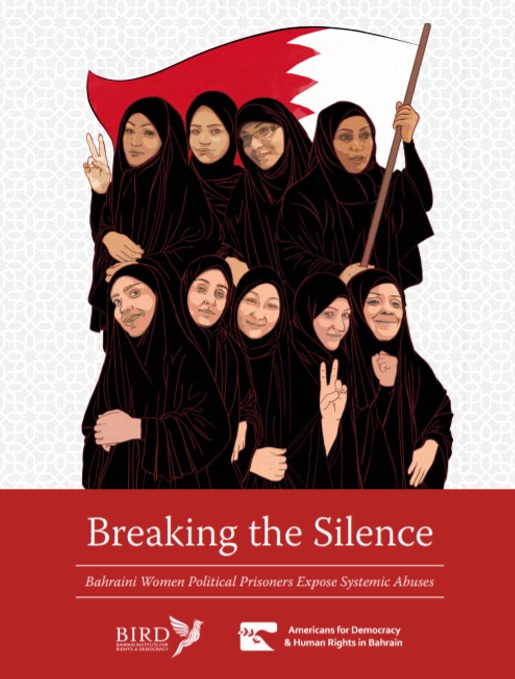 Women political prisoners in Bahrain have been subjected to abuse at every stage of the criminal procedure, including illegal arrests, physical, sexual and psychological torture to extract confessions, sham trials and inhuman prison conditions, Americans for Democracy & Human Rights in Bahrain (ADHRB) and the Bahrain Institute for Rights and Democracy (BIRD) revealed in their new report. These abuses continue uninvestigated as oversight bodies trained with funding from the UK and the US governments are complicit and fail to hold perpetrators accountable.

The 135-page report, Breaking the Silence: Bahraini Women Political Prisoners Expose Systemic Abuses, reveals a sinister increase in the political targeting of female activists and human rights defenders since 2017 as part of a wider crackdown on free speech and peaceful opposition, which coincided with the reinstatement of the National Security Agency (NSA)’s arrest powers in January 2017. Between April and May 2017, two of the women featured in this report suffered the most severe abuse at the hand of NSA officers, including allegations of torture, sexual assault and rape.

Since early 2017, ADHRB and BIRD have been conducting interviews with nine women or their relatives. These women have been targeted for their political views or those of their family members. BIRD and ADHRB have also interviewed their lawyers and, when available, have analysed their legal documents. Seven experts from organisations including Amnesty International, Human Rights Watch and the World Organisation Against Torture, have provided commentary throughout the report.

ADHRB and BIRD recommend that Bahrain should allow access to the Special Rapporteur on torture and other cruel, inhuman or degrading treatment or punishment, as well as the Special Rapporteur and on violence against women, its causes and consequences, and the Working Group on Arbitrary Detention. ADHRB and BIRD also recommend that Bahrain conduct a “timely, transparent and thorough investigation into allegations of arbitrary arrests, coercive interrogation tactics and physical and sexual assault, ensuring that all responsible officers are held accountable.”