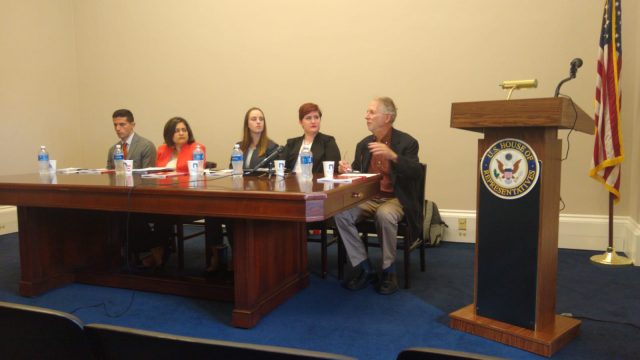 Monica Zuraw opened the panel and introduced the panelists and ADHRB’s report. She noted that the panelists would address not only the cases of the nine women included in the report, but also the broader context of women’s rights and ill-treatment of women around the Arab Gulf and the Middle East and North Africa.

Bridget Quitter opened the discussion with the background of nine women discussed in the report. She highlighted the unfair methods used to arrest and try the women as well as the torture and ill-treatment each woman faced in Bahraini prisons. She noted that in writing the report, AHDRB struggled to gain access to court documents and with the Bahraini government’s unwillingness to cooperate with human rights groups by extending access to the country and to human rights defenders and activists. Quitter concluded her remarks with recommendations outlining how the US government – as a close ally of Bahrain – must urge the Bahraini government to take serious steps to address its human rights violations. 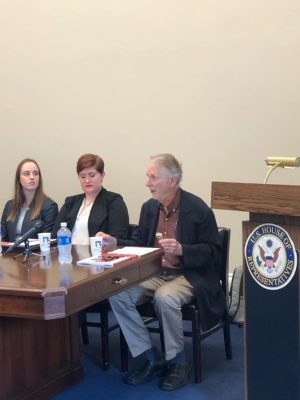 Joe Stork, Human Rights Watch’s (HRW) Deputy Director for the Middle East and North Africa, discussed HRW’s part in drafting the report by providing input and edits throughout the process. He talked about HRW’s long-standing work monitoring human rights abuses in Bahrain, and attempts to enter the country to carry out fact-finding missions. Stork stated that the treatment of women in Bahraini prisons mirrors the treatment of male prisoners and that there are broader similarities between the treatment of female and male prisoners by the Gulf states. But while the women may not endure unique conditions in prison, they remain at risk of arbitrary detention, coerced confessions through torture, and unfair trials based on the broad use of the counterterrorism law.

Stork also emphasized the failure of Bahrain’s oversight bodies that were established after 2011 to address human rights abuses in prisons. He also highlighted the particularly important role of the National Security Agency in the crackdown against female human rights defenders and briefly discussed the retribution by Bahraini prison officials against prisoners who have filed complaints. Stork concluded his remarks by calling on the United States to take serious steps to hold Bahrain accountable for its abuses and to do more than simply “expressing concern” to address these human rights violations. 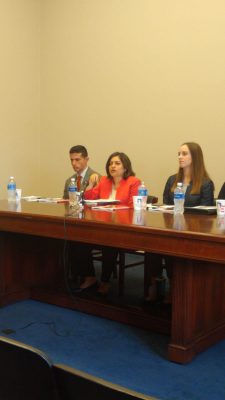 Shadi Mokhtari followed Stork, and expanded the discussion, providing a boader context for women rights activists in the Middle East. She talked about how the dynamics of women’s engagement on the political spectrum has shifted dramatically since 2011. Before 2011, women’s movements remained separated from other political movements. Additionally, governments in the Middle East have implemented what Mokhtari termed “state feminist” policies, policies that used women in ways that only identified women’s rights issues on a surface level in attempts to develop stronger alliances with Western governments. However, she noted that since 2011, the women’s rights movements have become increasingly integrated into political movements.

As a result of this, women and women’s rights have become increasingly politicized in the Middle East, with more women participating in protests and occupying public spaces in new and different ways. While this shift in women’s rights movements demonstrates a positive development, it has also led to the governments, and the Bahraini government in particular, targeting women in new ways in part because, as a result of their involvement, the governments see them as real threats. Professor Mokhtari concluded her remarks by calling on the US government to not play along with these governments’ showcasing of women and must recognize the government’s use of women as a strategy ploy.

Philippe Nassif focused on women’s roles in the protest movements around the Gulf region, in an effort to illuminate the broader impact women have had on pushing for accountability for rights abuses and government violations. He stated that people in the Middle East and in the Gulf no longer fear their governments, and as a result, are starting to demand government accountability for abuses. He highlighted that women are playing important roles in these protests. For example, female protesters have worked to protect protesters from officials under the belief that the officials will not want to attack women. 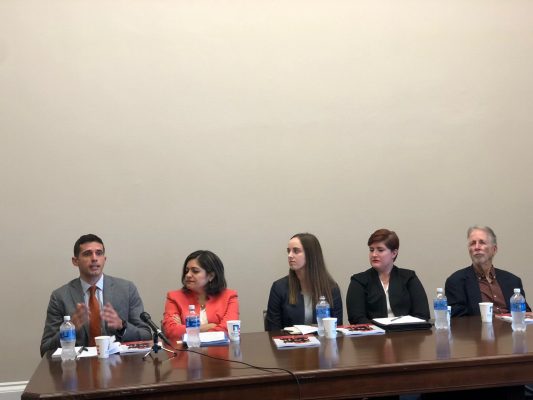 However, as a result, crackdown against protests have become particularly brutal, especially in Iraq and Egypt. Nassif specifically highlighted the imprisonment of the women in Jordan and the use of American provided weapons by the government against refugee populations in Turkey. He brought the conversation back around by noting the immensely important role that women in Bahrain are playing to expose abuses and call for accountability. He finished his remarks by calling on the US to use its leverage over Bahrain to stop these human rights violations.