Canada is regarded on the international stage as a beacon for human rights, liberty and the rule of law. It holds a rigorous stance towards exporting weapons and arms: that there shall be no trade with a country where there is evidence that these arms are used against a civilian population. However, a recent decision made by the Canadian government raises questions as to whether this humanitarian stance is sincere or just rhetoric until superseding economic interests arise.

On April 9 2020, the Trudeau administration announced that it would lift the suspension on arms exports to Saudi Arabia. This renegotiated trade deal will supposedly operate under the terms that Canada could delay or cancel permits without penalty if it discovered Saudi Arabia was not using the vehicles for their stated purpose”. In addition, every permit would be assessed on a case-by-case basis. As the Federal Minister of Foreign Affairs Francois Philipe Champagne and the Minister of Finance Bill Morneau stated, unfreezing the export ban was necessary to secure jobs within the country; as in many other countries, the outbreak of the coronavirus pandemic has led to massive loss in employment all across Canada. According to arms control advocate Cesar Jaramillo of the Canadian peace research institute Project ‘Ploughshares’, this controversial decision comes as no surprise. Jaramillo maintained “Canada’s support for weapons sales to Saudi Arabia has never faltered. Even during the moratorium, arms shipments continued.” At the same time, the Canadian government is “well aware of the years-long, well-documented, consistent pattern of human rights violations both within Saudi Borders and in neighbouring Yemen.” Now, with the chaos wrought by global coronavirus pandemic which ensured the world’s attention was taken up entirely by health concerns, the Canadian government is unlikely to face extensive public backlash for its decision to throw basic humanitarian principles overboard.

At the same time, however, human rights violations in Saudi Arabia have not ceased to occur. Infamous for its repressive authoritarian rule, the Saudi regime continues to have very little respect for the most fundamental human rights such as freedom of expression, association and belief. Women remain extremely discriminated against in all spheres of their daily life. Regime dissidents, human rights defenders and women’s rights activists are routinely harassed, judicially targeted, arbitrarily detained and tortured because of their activism. If this was not problematic enough, human rights violations inflicted by the Saudi regime were not limited to its national borders.

Since the outbreak of the war in Yemen, a Saudi-led coalition has committed numerous violations of international humanitarian law due to a number of unlawful airstrikes on homes, markets, hospitals, schools and mosques that have wounded and killed thousands of civilians. In addition, extensive aerial and naval blockades restrict the flow of life-saving goods to its people, leaving millions of Yemenis at the brink of starvation. The UN estimates that about 80% of the Yemeni population requires humanitarian assistance and protection, with 10 million people suffering from extreme malnutrition, diseases and poor health. Yemen is locked in one of the worst humanitarian crises in modern history. However, countries like Canada continue to export military equipment that is employed in the serious violation of human rights and humanitarian law.

Despite the Canadian government explicitly stating that it is scrutinising its arms exports by reviewing permits on a case-by-case basis, there is substantial evidence that this might not be enough. Multiple photos featuring soldiers holding Canadian-made sniper rifles, and videos in which convoys of Canadian-made light armored vehicles (LAVs) appear to be cruising over sand dunes in the Jajjah province in Yemen have been identified. According to calculations based on statistics released by the government, since the beginning of the war in Yemen, Trudeau’s administration has approved a 2.4 billion dollars export of military goods. In 2018 alone, Canadian armored fighting vehicles worth one billion dollars had been shipped to Saudi Arabia. In addition to this, these statistics do not include sales made by the Canadian vehicle company Streit Group. This is due to the fact that its primary factories are based in the United Arab Emirates and not in Canada, therefore the company is not subjected to Canadian export controls. Thus, there are no political repercussions for the Canadian government regarding the large Streit Group supply of military goods and technologies to the Gulf states.

In recent years, Canada’s humanitarianism abroad can appear to outsiders as dubious and two-faced. As with many other things, economic interests play a major role. In 2014, the Kingdom of Saudi Arabia and Canada’s Conservative Harper administration signed an arms deal to export LAVs that was valued at almost 15 billion dollars. The deal was heavily criticized by numerous Canadian politicians and news outlets for practically supporting the kingdom in its systematic and widespread violation of human rights. Furthermore, after the beginning of the war in Yemen in 2015, concerns over the use of LAVs imported from Canada against the Yemeni population grew. Despite the criticism, the 2014 arms deal helped propel Canada to one of the biggest arms exporters to the Middle East. Since 2016, the Kingdom of Saudi Arabia maintains itself as Canada’s top trading partner, by receiving almost 1.3 billion dollars in military exports in 2018 which accounts for 62% of Canada’s total value of non-U.S. military exports.

Canada’s commitment to economically support Saudi Arabia did cease with Justin Trudeau’s instalment as Prime Minister in late 2015. In April 2016, there was a renewed push by Trudeau in favour of the deal by assigning permits allowing the export of LAVs. The prime minister was confronted about Canada’s potential complicity in the human rights violations of Saudi Arabia by the Canadian MP member of New Democratic Party, Hélène Laverdière. Trudeau defended Canadian arm sales by stating that his government had “little choice but to respect the contract signed by the previous government”. Furthermore, permits would only be “approved if the exports are consistent with our foreign and defence policies, including human rights.”

Yet throughout the years, several events and actions suggest that the Canadian arms exports to Saudi Arabia are in fact being used against civilians outside Yemeni borders. As stated by Ploughshares in 2011, the Saudis sent Canadian made LAVs into Bahrain in order to help repress the 2011 peaceful democratic protests. The Canadian government has not denied the incident, but rather suggested that the vehicles were used to “protect key building and infrastructure, and did not engage in suppression of peaceful protests”. Furthermore, the European-Saudi Organization for Human Rights reported that there was video footage which proved that “Saudi authorities deployed armored vehicles against Shia civilians in its Eastern Province more than 15 times between 2011 and mid-2016”.

In 2018, a diplomatic crisis strained the economic ties between Canada and Saudi Arabia after Canadian Minister of Foreign Affairs Chrystia Freeland and other Canadian diplomats called for the release of imprisoned human rights activists. As a result, the Saudi regime expelled the Canadian ambassador and suspended all new trade and investment with Ottawa. After this diplomatic dispute and the murder of journalist Jamal Khashoggi, in December 2018 Prime Minister Trudeau assured that Canada was looking for a way out of the 2014 arms deal because of “substantial risk that goods would be used for violating human rights and humanitarian law”.

Yet, official figures published in 2019 show that since Trudeau’s announcement, LAVs worth more than one billion dollars have continued to be exported to Saudi Arabia. It is also remarkable that Canada was the last member of the G7 group of industrialized nations and the members of the North Atlantic Treaty Organization (NATO) to join the Arms Trade Treaty (ATT) on September 17, 2019. Having entered into force in 2014, the treaty regulates the international arms trade and seeks to reduce human suffering caused by the use of weaponry by “targeting unregulated and irresponsible trade in conventional weapons that fuels armed conflict, enables human-rights violations and sustains autocratic regimes”.

Technically, joining the ATT should have made it more difficult for Canada to broker deals with countries with poor human rights records such as with Saudi Arabia. Yet, this political move has meant little. On the same day that Canada joined the ATT, a memo sent from Global Affairs Canada to the former Foreign Affairs Minister Freeland stated that the Kingdom of Saudi Arabia had been accused of “gross violations of international human rights and humanitarian law due to its role leading a military coalition in Yemen”. Despite the country’s overall human rights record remaining problematic, there would not be any direct proof that links “Canadian military exports to unlawful conduct”. Since the release of the Global Affairs review, the Canadian government has refused to release a copy of this investigation. Even more problematic, the 2020 decision to lift the freeze on military exports was based on the information provided by the Global Affairs review.

Canada’s decision to continue the arms trade with Saudi Arabia is tantamount to an unofficial endorsement of its crimes against the Yemeni people . In spite of remaining aware of the fact that it is slipping the tools for death and destruction to a war-mongering regime, Canada demonstrates that its moral stances and humanitarian principles are nothing more than a candle in the wind. In the past decade, Canada has proven that practically nothing, neither the humanitarian crisis in Yemen nor diplomatic disputes with the kingdom itself, can keep them from shipping military goods and technologies worth billions of dollars to Saudi Arabia: a country that has one of the poorest and most gruesome human rights records of all countries on the planet. Instead of pursuing solely economic interests, the Canadian government should reconsider the decision taken in April 2020 and opt for a suspension of Canadian military assistance in order to “send a clear signal, to all parties to the conflict and any remaining allies who continue to implement lucrative yet deadly arms deal, that the horrors in Yemen must stop”. Otherwise, the country can no longer honestly call itself a beacon of human rights, liberty and the rule of law in good faith. 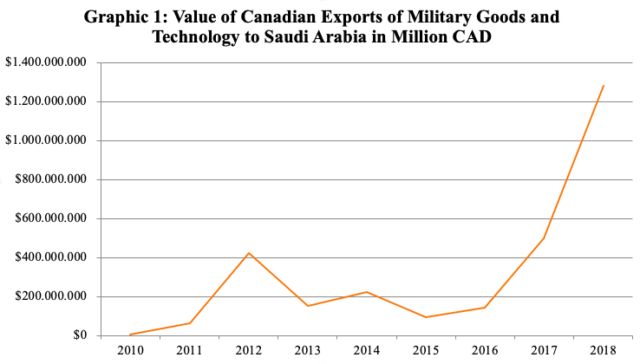 Source: Own graph based on data published by the Canadian government (https://www.international.gc.ca/controls-controles/report-rapports/index.aspx?lang=eng) 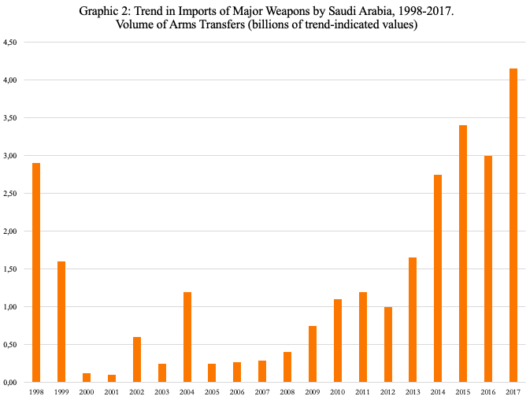 Source: Own graph based on Data from the SIPRI Arms Transfers Database