Over the last 15 years, Italian arms export production has increased to account for 1.4% of Italian GDP – further fueling ongoing armed conflicts happening worldwide. According to the Trends in International Arms Transfers submitted by the Stockholm International Peace Research Institute (SIPRI), Italy remains as one of the top 10 countries that export arms to  countries such as Saudi Arabia, UAE, and Bahrain. Between the years 2014 to 2015, the Italian arms trade ballooned by 200% and specifically exports to Saudi Arabia had increased by 58%  just over the course of one year. In addition, exports to  Bahrain rose from 24 to 54 million euros, an increase of 125%.

Over the past few years, Italy has failed to comply with national and international legislation concerning arms exports to high-risk areas such as the Arab Gulf. The first national law that concerned the restriction of weapons to states that employ their use to defy international and human rights law was in 1990. According to Law 185 (modified in 2003), the export of weapons and military equipment is authorised by the Ministry of Defence, the Ministry of Foreign Affairs, and the Ministry of Finance. The law establishes in art. 1 conditions of the restriction and ban of the export of weapons; specifically in subsection 6 it lists the prohibitions the arms industry has to abide by in order to trade these weapons. Furthermore the conditions include the prohibition of the export of military supplies to countries with ongoing armed conflict; to countries whose policies are against art. 11 of the Italian Constitution; to countries which have been the object of the total or partial embargo of military supplies from the UN or the EU; to countries whose governments have been responsible of violations of International Conventions in the area of human rights, verified and condemned by bodies of the UN, EU or the Council of Europe.

Moreover, Italy is politically obliged to comply with the Common Position 2008/944CFSP of the Council of the European Union which defines the common rules to control the export of weapons and military technology. The criteria of the common position, listed in art. 2, clearly states the requirement to respect human rights in the country of final destination and exercise discretion and vigilance in issuing licenses for equipment that might be used for internal repression. The list also includes reference to the preservation of regional stability and the prohibition of issuing licenses that may ‘provoke or prolong armed conflicts or aggravate existing tensions or conflicts in the country of final destination’.

In addition, as a state party of the 2014 UN Arms Trade Treaty, Italy is  required to comply with articles 6 and 7 of the convention concerning the non-authorization of any transfer if there is knowledge of serious violation of international human rights or international humanitarian law.

Despite the commitment to the UN Arms Trade Treaty and the EU Common Position 2008/944CFSP, Italy continues to supply armaments and military ammunition to Saudi Arabia, the United Arab Emirates (UAE) and Bahrain. Although article 11 of the Italian Constitution claims that Italy does not accept war as a way of resolution to conflicts, its engagement in providing weapons to the Saudi-UAE-led coalition involved in the Yemen war contravened its own constitutional principles.

Since March 2015, Saudi Arabia and its coalition have been employed in a heavy bombardment campaign in the republic of Yemen, causing the world’s worst humanitarian crisis with the death of more than 100,000 people and thousands of injuries. Italy’s contribution became evident on 8th October 2016, when a family of six, including four children, were killed in the northwest side of Yemen by a bomb produced by RWM Italia S.p.a, an associate of the German weapons manufacturer Rheinmetall AG. Moreover, between 2015 and 2018, a large consignment of MK series aerial bombs, such as MK82 and MK84, which were produced in Domusnovas in Sardinia by the RWM Italia S.p.a were transported from Italy to Saudi Arabia and the UAE. Furthermore, in 2016, the Renzi Government authorised the supply of 19,675 bombs to Saudi Arabia to the tune of €411 million. In 2018, 1,756 bombs  were shipped to Saudi Arabia valued at €42 million. Remains of these bombs have consistently been found as debris in multiple different airstrike sites throughout Yemen.

These transactions have been shown to be financed through Italian banks, whose activities have provided a fundamental role in the supply of weapons exports. Usually, the banks directly fund the production and sale of arms. Banca Valsabbina for instance, a small credit institution in the province of Brescia, does not currently have a policy on the financing companies involved in the arms trade. This makes it attractive to the major foreign arms importers, including the United Arab Emirates and Saudi Arabia. It can be noted that in 2015, a huge 763.8% increase in transactions from the bank was partly due to the weapons that were exported from Italy that were produced by RWM Italia in the same year.

It is not surprising that in the report of the Ministry of Economy and Finance (MEF) submitted to SIPRI in 2018, a significant transaction of €25,016,328 in “reported amounts” is stated. This amount can be ascribable to the supply of 19,675 bombs of MK 80 class manufactured by RWM Italia to Saudi Arabia. This also signifies what a crucial role that Banca Valsabbina had provided to facilitate the provision of arms to Saudi Arabia.

Despite several resolutions of the European Parliament (Resolution 2018/2853/RSP) and Resolution 2008/944/CFSP) to impose an embargo on military arms to Saudi Arabia and UAE, the latest report submitted by the Italian government to SIPRI does not include any revocation or suspension on arms export. According to SIPRI, Saudi Arabia remains Italy’s third major arms trading partner, accounting for 7.2% of total arms exports. As recently in June 2019, the Italian Parliament had agreed in refraining from exporting arms to Saudi Arabia and the UAE, as a result of a campaign promoted by Movimento dei Focolari Italiani, Oxfam Italia, Amnesty International and Rete della Pace e Rete Disarmo. After a parliamentary meeting, the Vice-Premier at the time, Luigi Di Maio, commented on the arms export suggesting that ‘it is necessary to completely shut down the export of air fuel bombs, missiles or military equipment which could go to Saudi Arabia and the UAE for the Yemen war.’ However, before the ban came into place, around 1000 bombs valued at €25 million were exported by RWM Italy to Saudi Arabia. Furthermore, the Parliament motion only referred to the aircraft bombs and missiles excluding the supply of sidearms. 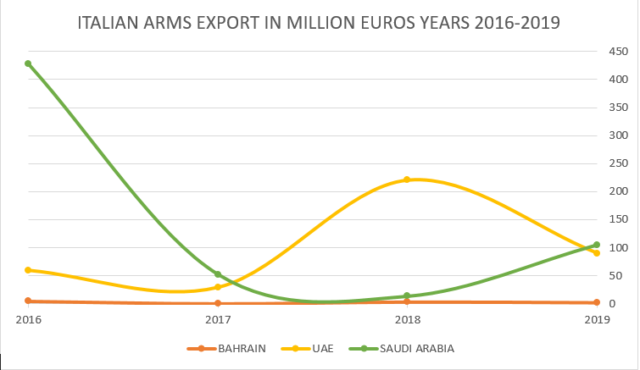 Along with Italy’s repeated continuation of exporting arms to Saudi Arabia and the UAE, the country continues to supply weapons to another belligerent of the war – Bahrain. As another member of the Saudi-led coalition, Bahrain also continues to flout international human rights and humanitarian law by perpetrating war crimes against innocent civilians caught in the Yemen conflict.

In 2011, Amnesty International included Italy in the list of nine countries whose governments allowed the export of weapons, ammunition and other such equipment to Bahrain since 2005. In the years 2006 and 2007, Italy exported arms and weapon systems greater than 12.7mm and specially designed equipment worth a total of €208,468,5. In 2008, the Bahraini government imported weapons which were greater than 12.7mm calibre valued at just over €40.5 million. Subsequently in 2010, Italy exported the same type of military equipment to Bahrain at the total price of €69 million, compared with only €167,897 in 2007. 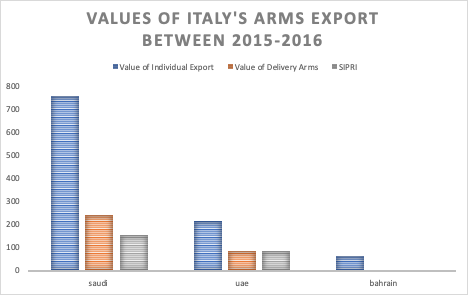 Furthermore, according to research completed by Lighthouse Reports, Italian Benelli shotgun spare parts were used against civilians during the 2011 peaceful pro-democracy protests. This is direct contravention with Italian legislation and EU agreements that deny export licenses to weapons used by states for internal repression against their citizens.

In 2015, an agreement was concluded between the Minister of Defense, Roberta Pinotti, and her Bahraini counterpart, Yusuf bin Ahmed Al Jalahma, which aimed at increasing the military defence of both countries. Due to this agreement, the value of arms exported from Italy to Bahrain has increased from €24 million to €54 million.

In the same year, the Italian arms industry company, Selex ES (Finmeccanica), signed an agreement of €50 million with the Royal Bahrain Naval Force. The agreement lasted five years and included training workshops for the supplied products. This has meant that Italian implication with the Bahraini military activities has become evident through the participation of Selex ES to the Bahrain International Airshow, which was in line with the agreement that specified the engagement of civil and military aviation so as to ensure the future supply of surveillance sparse systems. More recently, in early 2020, Bahrain signed seven agreements with major italian companies to the tune of €330 million. Among them is LEONARDO (ex Finmeccanica), the largest Italian weapon producer, which was ranked 8th in the top 10 list of weapons manufacturing companies. The Prime Minister Giuseppe Conte expressed his disagreement towards the arms trade to Saudi-UAE-led coalition, stating: “The Italian Government is against the arms export to Saudi Arabia, due to its role in the Yemen war […]”.

In conclusion, despite the purported statements of officials, international commitments and even constitutional provisions, Italy continues to supply weapons to the key belligerents of the war in Yemen. The banking industry has facilitated the financing of Italy’s largest arms manufacturers, along with lax banking policy that fails to prohibit the sale of arms to countries involved in perpetuating breaches of human rights and international humanitarian law. Saudi Arabia, the UAE and Bahrain have been guilty of employing Italian manufactured weapons against innocent civilians. This will only stop if Italy implements its own law, international conventions and EU wide policy effectively – including the exercise of rigorous banking checks to ensure no company or state can can use this avenue as a backdoor to purchase italian manufactured weapons.