Read The full question in English 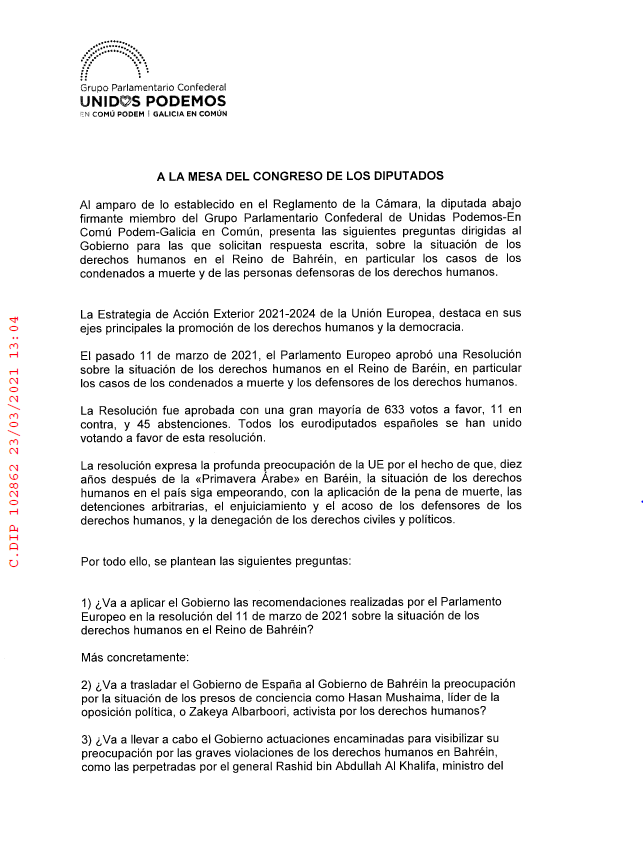 Deputy Serrano’s question is as follows (translated from Spanish):

“In accordance with the provisions of the Rules of Procedure of the House, the undersigned member of the Confederal Parliamentary Group of Unidas Podemos-En Comú Podem-Galicia en Común, submits the following questions to the Government, requesting a written answer, on the human rights situation in the Kingdom of Bahrain, in particular the cases of death row inmates and human rights defenders.

“The European Union’s External Action Strategy 2021-2024 highlights the promotion of human rights and democracy as one of its main axes.

“On March 11, 2021, the European Parliament adopted a resolution on the human rights situation in the Kingdom of Bahrain, in particular the cases of death row inmates and human rights defenders.

“The Resolution was adopted with a large majority of 633 votes in favor, 11 against, and 45 abstentions. All Spanish MEPs were united in voting in favor of this resolution.

“The resolution expresses the EU’s deep concern that, ten years after the “Arab Spring” in Bahrain, the human rights situation in the country continues to worsen, with the application of the death penalty, arbitrary arrests, prosecution and harassment of human rights defenders, and the denial of civil and political rights.

“1. Is the Government going to implement the recommendations made by the European Parliament in the resolution of March 11, 2021 on the human rights situation in the Kingdom of Bahrain?

“2. Is the Government of Spain going to convey to the Government of Bahrain the concern about the situation of prisoners of conscience such as Hasan Mushaima, leader of the political opposition, or Zakeya Albarboori, human rights activist?

“3. Will the government take action to highlight its concern about serious human rights violations in Bahrain, such as those perpetrated by General Rashid bin Abdullah AI Khalifa, Minister of Interior, or Nasser bin Hamad AI Khalifa, commander of the Royal Guard, in accordance with the European Magnitsky law passed in December 2020?

“4. Will the Government accommodate its actions to the EU Code of Conduct on Arms Exports and suspend all sales and transactions of arms, surveillance and intelligence equipment and materiel that may be used by Bahrain in its ongoing pursuit of human rights?”

The relevant government official has not yet responded to Deputy Serrano’s question, but a response is expected either before or by 7 May 2021.