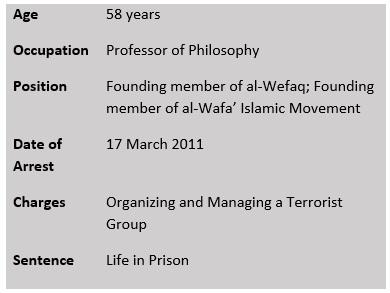 Abdulwahab Hussain is a philosopher and social critic with a long history of activism in Bahrain. Born in Nuwaidrat, Hussain earned a Bachelor’s degree in Philosophy and Sociology from Kuwait University in 1977. Hussain worked as both a teacher and a social worker until he was dismissed from his posts on account of his political activities.

During the surge in protests during the 1990s, Hussain was arrested on two separate occasions. The first was in 1995, when he was held for approximately six months under administrative detention absent any formal charges. His second arrest was in January 1996, and he was imprisoned for five years and held in solitary confinement.  In early 2000, Hussain was pressured to sign a letter of apology to the Emir in exchange for a pardon. He refused, and remained in prison for a several more months until the High Court of Appeal finally ordered his release. Once home, he was re-arrested by security forces. Hussain remained in administrative detention until the new Emir and soon to be King, Hamad bin Isa al-Khalifa, pardoned a number of opposition leaders as part of a reform program in early 2001.

Only months after his release, Hussain went on to co-found al-Wefaq, now Bahrain’s most prominent opposition group. However, disagreements arose in 2003 when Hussain called on the opposition to boycott a new round of parliamentary elections.  Ultimately, al-Wefaq decided to participate and Hussain left the group.

Though Hussain has worked with numerous reform and protest movements in Bahrain, today he is most associated with al-Wafa’, another opposition group he co-founded in February 2009.

Hussain joined many human rights defenders in organizing the 2011 protest movement against the Bahrain government. Hussain was subsequently arrested on March 17, 2011. He and his daughter were both beaten during the arrest and Hussain was subjected to torture and mistreatment during his incarceration. He has been spent a portion of his sentence in solitary confinement and remains in prison today. Hussain has been consistently denied access to medical care while in prison, despite his suffering from a chronic neurological disorder. As a result, in November 2013, he experienced complications and his health continues to deteriorate. He is also suffering from “retinal laceration, deterioration of eyesight, and low blood hemoglobin” from which he has contracted numerous infections, which also remain untreated.

During the month of February, ADHRB is asking all defenders of human rights to take part in highlighting Champion for Justice Abdulwahab Hussain by tweeting under the hashtag #FreeHussain throughout the month, and changing your Facebook profile picture to the image above. Follow our Twitter account @ADHRB for updates on his situation and his urgent medical condition.

Want to do more? Use our template to write a letter to your Member of Congress expressing your concern about Abdulwahab Hussain. Please use the following websites to find the contact information for your Representative and Senator.

Click here to learn more about the Champions for Justice Campaign.