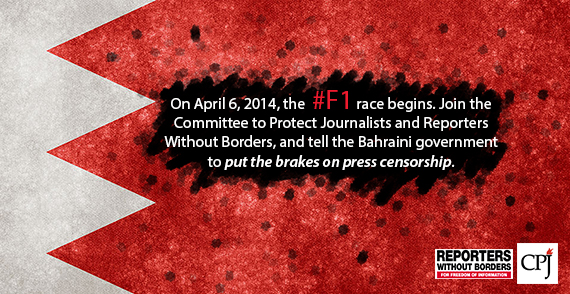 Every year, the Bahraini government hopes the roar of Formula One cars will drown out criticism for the regime’s human rights violations. Only YOU can ensure that does not happen.

Join us in calling on the government to allow journalists to report freely in Bahrain, whether they cover changing tires on the racetrack or burning tires on the street. Your participation in this Thunderclap will create a social media flash mob timed to the starting gun of the F1 race on April 6, 2014, at 6 p.m. local Bahraini time/11 a.m. EST. Together, our voices will be heard over the roar of race car engines.

Attempt by the Bahraini government to censor media coverage since the launch of a mass protest movement in February 2011 have been well documented. At least three news providers have been killed for their work and many more have been subject to arrest and even torture. Many news providers remain imprisoned today. Several journalists have been forced into exile in fear for their safety. The government has also limited access to international journalists and human rights organizations seeking to cover the ongoing unrest and repression in the country. Meanwhile, some protesters on the street have assaulted journalists considered sympathetic to the government.

With this cycle of censorship against the press, it’s clear that it’s not only F1 cars that are racing in circles in Bahrain. By joining this campaign, help us put a brake on press censorship.

*This campaign was initiated by the Committee to Project Journalists and Reports Without Borders.