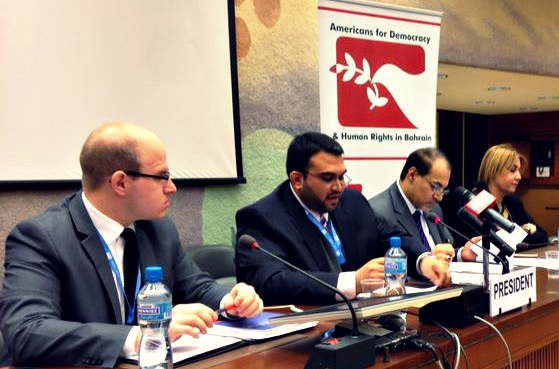 On 12 March, Americans for Democracy and Human Rights in Bahrain (ADHRB) hosted an event at the 25th session of the United Nations Human Rights Council (HRC) examining Bahrain’s failure to reform and implement the recommendations received when the country underwent its Universal Periodic Review (UPR) process in 2012. The event was held with participation from and in partnership with: Al-Salam Foundation, International Federation for Human Rights (FIDH), REDRESS, World Organization Against Torture (OMCT), Bahrain Human Rights Observatory (BHRO), and Bahrain Center for Human Rights (BCHR).

ADHRB Executive Director Husain Abdulla began by arguing that the issues addressed in the 158 UPR recommendations accepted by the Bahrain government “reflect many of the demands that spurred the protests in February 2011.” Mr. Abdulla highlighted the work being done on behalf of human rights in Bahrain at the HRC and noted that “a coalition in the U.N. willing to engage Bahrain exists and is growing”. He urged the United States to take a leadership position in pressuring the “Bahraini government to uphold its human rights obligations and shift the momentum in the country back toward stability.”

Though the Bahrain government insists reform is taking place, and indeed highlighted the recent visit by a delegation from the Office of the High Commissioner for Human Rights (OHCHR) as proof, panelists were less than optimistic about the implementation of reform and the UPR recommendations on the ground. Mohammed al-Tajer from BHRO stated that “Bahrain does not respect its international human rights obligations” and has not taken “any serious steps to implement the UPR recommendations.” Kevin Laue of REDRESS said his organization, which has worked on Bahrain for over15 years, found that “torture has become a part of life in Bahrain … protected by a culture of impunity that is supported by the Bahraini government.”

Nidhal al-Salman from BCHR discussed the ill-treatment of women and children in Bahrain, noting that while the Government of Bahrain has called moves to empower women crucial for reform, women and children continue to be targeted and attacked for exercising their freedom of expression. Ms. al-Salman also said that many women face torture and sexual assault in detention. Discussing the overall implementation of the UPR recommendations, Michael Payne from ADHRB noted with concern that not only has little progress been made, but that the Bahrain government enacted legislation in 2013 that actually increased restrictions on civil society, press freedom, and the activities of human rights defenders.

Panelists also discussed what members of the HRC could do to move Bahrain toward necessary human rights and political reforms. Julie Gromellon of FIDH said that U.N. officials, especially the High Commissioner for Human Rights, should not visit Bahrain until the release of human rights activist Nabeel Rajab, whose detention was confirmed arbitrary by the United Nations Working Group on Arbitrary Detention. Mr. Abdulla encouraged member States to publically express concern for the ongoing human rights violations in Bahrain while urging the Bahrain government to allow U.N. Special Procedures into the country. Mr. Payne said the Bahrain government must allow a full OHCHR mission with an investigatory and reporting mandate to operate on the ground. Short of the much needed reforms, Mr. Payne called for HRC member States to pursue a resolution against Bahrain under Item 2.