In March, Americans for Democracy & Human Rights in Bahrain (ADHRB) engaged the 25th Session of the United Nations Human Rights Council (HRC) in Geneva, Switzerland to raise awareness of ongoing human rights abuses in Bahrain. ADHRB met with dozens of member states, the United Nations Office of the High Commissioner for Human Rights, various NGOs, and United Nations officials and Special Procedures. Additionally, ADHRB hosted two side events, conducted oral interventions, and provided commentary on the proceedings of the Session.

Please continue reading or click here for a PDF of this article.

The month’s events began when Bahraini Foreign Minister Sheikh Khalid al-Khalifa’s addressed the HRC on 6 March. ADHRB issued a press release contesting the minister’s claim that Bahrain has made significant progress toward implementing the recommendations of the Bahrain Independent Commission of Inquiry (BICI) and its 2012 Universal Periodic Review (UPR). ADHRB noted the deterioration of the human rights situation in Bahrain characterized by the detention of thousands of political prisoners, the continued practice of torture, the passage of laws restricting the freedoms of assembly and expression, and an ongoing culture of impunity for human rights violators. 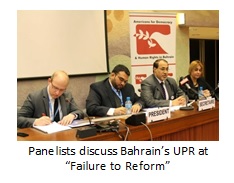 On 12 March, ADHRB hosted a side event titled “Failure to Reform: An Examination of Bahrain’s Universal Periodic Review Recommendations” with support from: the Alsalam Foundation, the International Federation for Human Rights (FIDH), REDRESS, World Organization Against Torture (OMCT), Bahrain Human Rights Observatory (BHRO) and the Bahrain Center for Human Rights (BCHR). Panelists discussed the minimal progress Bahrain has made toward effectively implementing the 158 recommendations it accepted as part of its 2012 UPR.

On 14 March, ADHRB hosted a second side event with the support of Alsalam Foundation examining the Government of Bahrain’s reprisals against human rights defenders in the country using tactics such as intimidation and blackmail to arrest and torture. 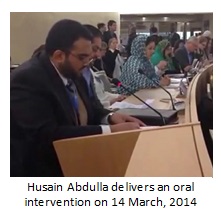 That same day, ADHRB Executive Director Husain Abdulla delivered an oral intervention to the HRC under Agenda Item 3 on the deteriorating human rights situation in Bahrain. Mr. Abdulla discussed ongoing human rights violations and notable cases of concern, including those of Abdulhadi al-Khawaja, Abduljalil Singace, Abdulwahab Husain, Hassan Musheima, Tagi al-Maidan, and 10-year-old Jehad al-Samea. Mr. Abdulla urged the HRC to pressure Bahrain to improve human rights on the ground and called on the government to release all political prisoners, provide full cooperation with the U.N. Special Procedures, and allow the establishment of a permanent Office of the High Commissioner for Human Rights (OHCHR) office in Bahrain with a full reporting mandate.

On 18 March, ADHRB Advocacy Associate Michael Payne delivered an oral intervention to the HRC under Agenda Item 4 noting that Bahrain has failed to live up to commitments it made during the BICI and UPR processes. Mr. Payne said that while various U.N. mechanisms continue to document violations of human rights in Bahrain, peaceful activists remain imprisoned on charges related to their work, including activists such as Dr. Ali Alekri, Hussain Hubail and Mahdi Abu Dheeb. Mr. Payne called for representatives of the U.N. Special Procedures to be allowed to visit Bahrain, including Mr. Juan Mendez, the Special Rapporteur on Torture and other cruel, inhuman or degrading treatment or punishment, and reiterated ADHRB’s call for the establishment of a permanent OHCHR office in Bahrain.

On 19 March, John Horne of Bahrain Watch delivered an oral intervention to the HRC on behalf of ADHRB under Agenda Item 5 noting the Bahrain government’s failure to support independent and credible human rights organizations and complaint mechanisms domestically. Mr. Horne highlighted the absence of any U.N. Special Procedures in Bahrain since 2006, and criticized both the Bahrain National Institution for Human Rights (NIHR) and the Office of the Police Ombudsman for lacking the necessary independence to effectively carry out their mandates. Mr. Horne also discussed troubling reports that individuals who engage these offices seeking redress have faced reprisals. Mr. Horne called on the Bahrain government to take seriously its commitments to the OHCHR and the wide-ranging recommendations of its UPR. 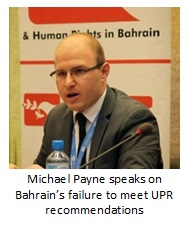 On 24 March, Mr. Payne delivered an Item 8 oral intervention to the Council regarding breeches by the Bahrain government of the Vienna Declaration specific to women’s rights. He criticized Bahrain for its reservations to Articles 2, 9, 15, 16 and 26 of the Convention on the Elimination of all forms of Discrimination against Women (CEDAW), noting that the expansive list of reservations to key portions of CEDAW effectively undermines the implementation of the Convention’s policy recommendations in the country. The intervention covered areas of gender bias in Bahrain’s Administration of Justice, particularly with regard to nationality and family law. Mr. Payne called on Bahrain to withdraw its reservations to CEDAW and pass the long-delayed draft law on nationality.

On 26 March, Mr. Payne delivered an oral intervention to the HRC under Agenda Item 2 highlighting repeated concerns raised by the OHCHR on Bahrain since 2011, which the government has yet to respond to. Mr. Payne noted the concerns raised in 2013 by OHCHR High Commissioner Navi Pillay over the convictions of the “Bahrain 13”, as well as the disproportionate use of force by Bahraini security forces – a practice which continues unabated.  Mr. Payne also recalled the 2012 demands of several U.N. Special Rapporteurs for Bahrain to end its “campaign of persecution against human rights defenders” following the arrest of Nabeel Rajab.  Nineteen months later, Mr. Rajab remains in jail, while other human rights defenders have been arrested and tortured, forced into exile, or subject to harassment.

On 27 March, Mr. Payne delivered ADHRB’s sixth oral intervention to the Council, this time under Agenda Item 10. Mr. Payne addressed several areas of technical inadequacy of human rights mechanisms in Bahrain and reiterated the ineffectiveness of the NIHR and Police Ombudsman’s Office as legitimate and independent mechanisms for critiquing national practices and policies to address possible human rights violations. “We hope that with further external monitoring and technical assistance, Bahrain may finally be able to achieve compliance with the many international treaties, mechanisms and standards of human rights to which the country has committed,” Mr. Payne concluded.