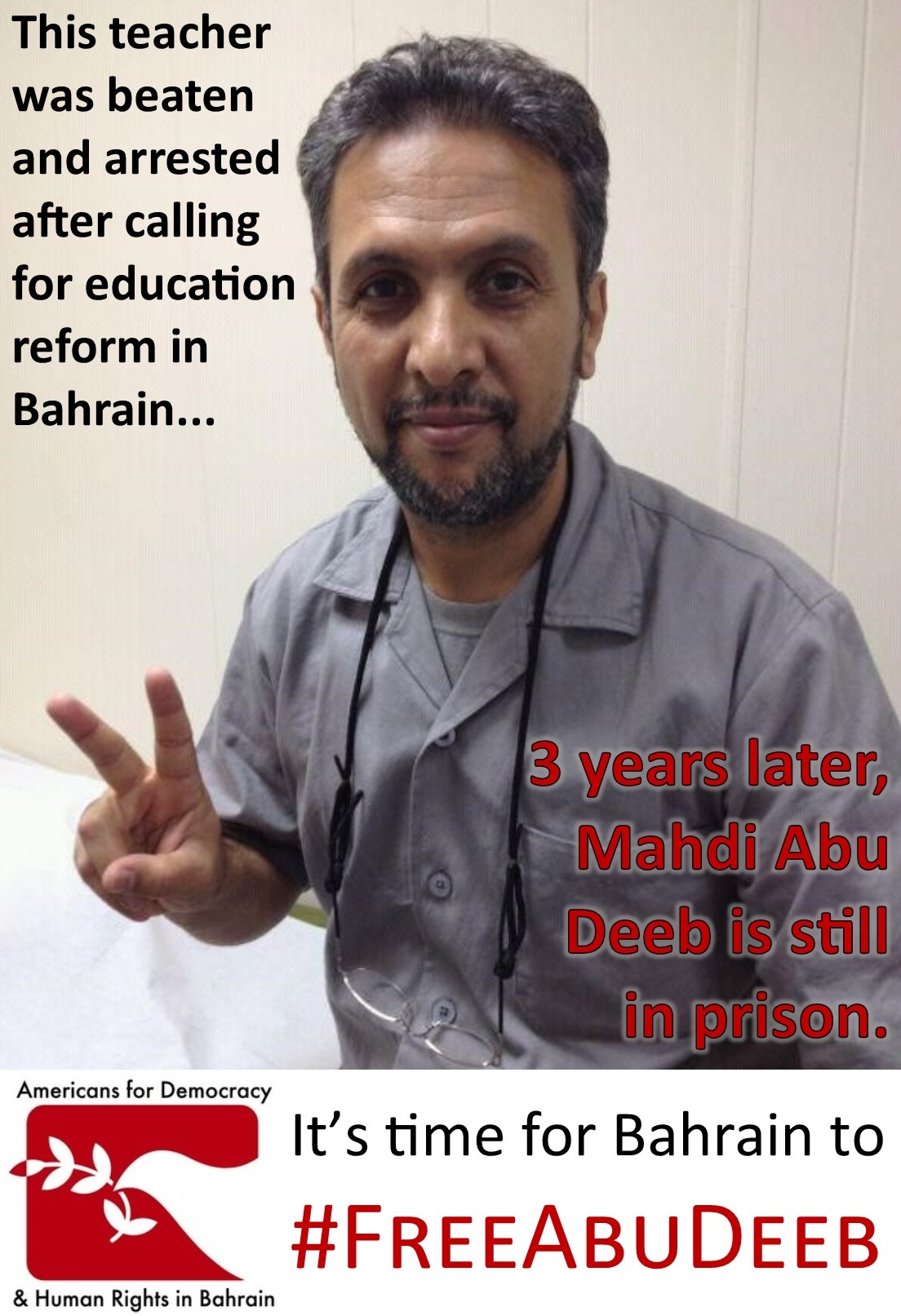 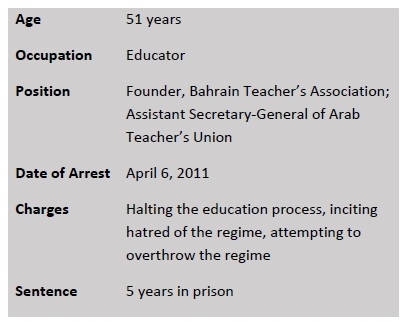 Dr. Mahdi Isa Mahdi Abu Deeb is an educator and education administrator formerly employed by the Ministry of Education to guide development of art studies in government schools. He is also the founder and president of the Bahrain Teacher’s Association (BTA), and was elected Assistant-Secretary General of the Arab Teachers’ Union in 2010.

In February and March 2011, the BTA joined protests calling for reform and was active in a strike concerning education reform and human rights abuses; Abu Deeb was instrumental in coordinating these nonviolent demonstrations. As a result, he was targeted by security forces and detained and beaten on April 6th, 2011 after seven failed attempts to arrest him. The BTA was dissolved by the Ministry of Social Development the next day. Three years later, neither the BTA nor any other society for the rights of teachers has been allowed to be re-established.

Following his arrest, Abu Deeb spent 64 days in solitary confinement, was physically assaulted, and would later allege in appeals court that he was tortured. The “National Safety Court”, a military tribunal formed under martial law, sentenced Abu Deeb to ten years imprisonment on legally dubious charges concerning his involvement in the February and March protests. His sentence was reduced to five years when his case was retried after sentences in the National Safety Courts were set aside and the case was moved to the Civil High Criminal Court of Appeals.

During his imprisonment, Abu Deeb has suffered severe neglect relating to his chronic health concerns, diabetes and high blood pressure, as well as other medical conditions resulting from ill-treatment and torture. He is being denied access to civilian doctors and is allowed to only see prison doctors whose medical services have been described as inadequate even in official state reports.

During the month of April, ADHRB is asking all defenders of human rights to take part in highlighting Champion for Justice Mahdi Abu Deeb by joining our #FreeAbuDeeb Twitter campaign on Monday, April 7th and changing their Facebook profile picture to the image posted above for the rest of the month. (Click here for a hi-res JPG)

Want to do more? Use our template to write a letter to your Member of Congress expressing your concern about Mahdi Abu Deeb. Please use the following websites to find the contact information for your Representative and Senator.