In the first week of the session, ADHRB, the Bahrain Institute for Rigths and Democracy (BIRD), and the Bahrain Center for Human Rights (BCHR) presented an oral intervention under Agenda Item 3 during a Clustered Interactive Dialogue with the Working Group on Arbitrary Detention addressing the ongoing systemic use of arbitrary detention in Bahrain. The statement highlighted the cases of Maryam and Abdulhadi al-Khawaja, among other prominent political prisoners. Mohamed al-Tajer, President of the Bahrain Human Rights Observatory (BHRO), also gave an intervention on behalf of ADHRB during the same interactive dialogue, highlighting the use of arbitrary detention against children in Bahrain.

Later that week, both Mr. al-Tajer and Mr. Payne delivered interventions during a second interactive dialogue, this time engaging the Working Group on Enforced and Involuntary Disappearances. In the first statement, ADHRB addressed the Bahraini authority’s ongoing use of short term enforced disappearances. In the second intervention, ADHRB raised the issue of enforced disappearance in the Kingdom of Saudi Arabia, including the case of Mr. Waleed abu al-Khair, and the cases of the thousands of political detainees who continue to languish in Saudi secret prisons years.

As the second week of HRC 27 commenced, BIRD’s Advocacy Associate, Ms. Amanda Milani, read a letter from Jehad Sadeq, a detained Bahraini child, during the Item 3 general debate. The letter recalled Sadeq’s detention and torture, and appealed to the Council to act on behalf of all detained Bahraini children. Later that day, Mr. Nabeel Rajab, President of BCHR, delivered ADHRB’s Item 4 general debate intervention, in which he called for the release of Bahraini prisoners of conscience and for the establishment of an OHCHR full mandate office in the country.ADHRB presented an additional Item 4 oral intervention regarding the human rights 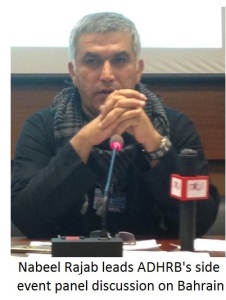 situation in the Kingdom of Saudi Arabia.  The intervention was delivered by Mrs. Samar Badawi of the Monitor of Human Rights in Saudi Arabia and wife of the imprisoned Saudi human rights lawyer, Mr. Waleed Abu al-Khair. Despite repeated attempts by the Saudi officials at the HRC to silence her and her statement, Mrs. Badawi gave passionate and striking critique of the Saudi government’s appalling human rights record before the Council.

On 18 September, 14 NGOs joined in co-sponsoring an ADHRB side event, titled “Tracking Bahrain’s UPR Inaction through 2014.” During the discussion, James Suzano, J.D., legal officer for ADHRB, spoke about a new report from ADHRB and BIRD, which assesses deficiencies in Bahrain’s national human rights mechanisms. Nidal al-Salman, Women and Children Rights Officer for BCHR, shed a positive light on the recent report from the B-NIHR but denounced the Bahraini government’s consistent failure to implement recommendations. Said Haddadi, Middle East Researcher at Amnesty International, spoke on Amnesty’s assessment of Bahrain’s implementation of their Second Cycle UPR, while Philippe Dam of Human Rights Watch said that despite pressure from the international community, the situation in Bahrain continues to deteriorate and that stronger action is needed. Finally, Abdulnabi al-Ekri, President of the Bahrain Transparency Society, stated that “Bahrain uses its acceptance of reform recommendations to distract from the ongoing human rights abuses.” Nabeel Rajab moderated the discussion. 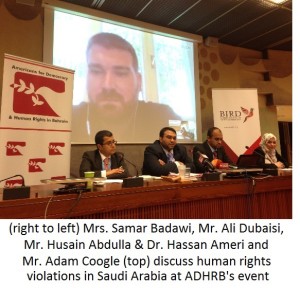 On 19 September, ADHRB’s Executive Director, Husain Abdulla, moderated the organization’s second side event, titled “Human Rights Violationsin Saudi Arabia,” The event was sponsored by BIRD, BCHR, the European Saudi Center for Human Rights (ESCHR), the Dewany Civil Office of the Ombudsman, the Gulf Center for Human Rights and Monitors of Human Rights in Saudi Arabia (MHRSA). Mrs. Samar Badawi of MHRSA noted that human rights defenders in the country are routinely accused of terrorism for their human rights activism. Mr. Adam Coogle, a Middle-East researcher at Human Rights Watch, said that Saudi Arabia has “cracked down significantly” on human rights activists in the country, and that a “string of activists” had been imprisoned in the last year for asking the government to respect its human rights obligations. Dr. Hassan al-Amri, chairman of the New Bakkah Foundation, discussed the government’s practice of punishing human rights defenders for their activities, while Mr. Ali al-Dubisi, founder and executive director of ESCHR, noted that Saudi officials violating human rights operate with impunity.

During the third week of HRC 27, Mr. Payne and Dr. Ameri delivered three oral interventions on behalf of ADHRB that highlighted the ongoing human rights abuses in Saudi Arabia. Both speakers addressed women’s rights in Saudi Arabia, under Agenda Item 5 and Item 8.  During ADHRB’s Item 10 intervention on Saudi Arabia, Mr. Payne noted that the Saudi government has failed to allow any of the UN special procedures access to the country since 2008, and has not implemented the recommendations it received from the Special Rapporteur on Violence against Women. 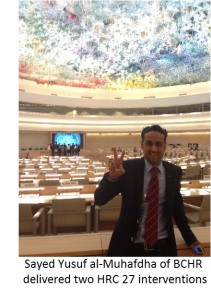 On 22 September, Sayed Yusuf al-Muhafdha, acting vice-president of BCHR, and Mr. Payne delivered interventions on Bahrain. In ADHRB’s Item 5 statement, Sayed Yusuf highlighted Bahrain’s failures to comply with its international commitments under the Convention Against Torture and the International Covenant on Civil and Political Rights. In an Item 6 intervention, Mr. Payne examined various ways the Bahraini government has acted contrary to the 158 recommendations the country accepted during its’ Second Cycle Universal Periodic Review (UPR). By the end of the final week, Sayed Yusuf had delivered additional statements on Bahrain under Item 9 and Item 10, highlighting religious discrimination in the kingdom, and calling for an OHCHR mission in the country with both a monitoring and capacity-building mandate.

During the last week of HRC 27, Bahrain’s Undersecretary for Foreign Affairs, Mr. Abdulla Abdullatif Abdulla, presented the Bahraini government’s Second Cycle UPR mid-term report to the Human Rights Council. Following his remarks before the Council, ADHRB issued a statement, with its assessment. The statement, based on ADHRB’s own reporting on Bahrain’s UPR implementation, stated that, “the government claims to have made progress in regards to many of the recommendations, including: improving laws against torture, releasing political prisoners, improving women’s status in society, and reforming the judicial system. In reality, the improvements cited by the government are largely superficial and fail to address the essence of the recommendations made during the second UPR cycle.”