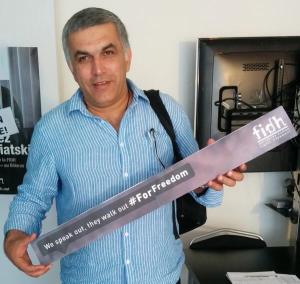 On October 1, 2014, Mr. Rajab, President of BCHR and Director of the Gulf Center for Human Rights (GCHR) was summoned to the Central Investigations Directorate’s (CID) Cyber Crimes Unit for interrogation.  Upon his arrival at the CID, he was taken into custody and interrogated for a number of hours.  Tomorrow he is scheduled to be transferred to the Public Prosecution Office.

Mr. Rajab’s arrest comes less than 24 hours after his return to Bahrain after spending more than 2 months in Europe attending the UN Human Rights Council 27th Session and advocating to various European capitals for human rights and democracy in Bahrain. There is strong reason to believe that Mr. Rajab’s arrest, interrogation and potential criminal charges are in relation to his most recent work as a human rights defender and his advocacy efforts throughout Europe, at the European Union, the European Parliament and at the United Nations Human Rights Council.

Mr. Rajab is no stranger to such reprisals.  He was arbitrarily imprisoned from July 2012 to May 2014 for exercising his right to freedom of assembly by participating in and calling for peaceful protests in Manama.  Mr. Rajab was also prosecuted on multiple occasions due to tweets critical of the government, including one case in which he was sentenced to 3 months for allegedly defaming citizens of Muharraq. Despite his acquittal in the Court of Appeals, Mr. Rajab had served most of his 3 month sentence.

We, the undersigned human rights organizations, call on the United States, the European Union, and other national and international bodies to actively engage the Government of Bahrain to:

Americans for Democracy and Human Rights in Bahrain (ADHRB)

The Bahrain Institute for Rights and Democracy (BIRD)