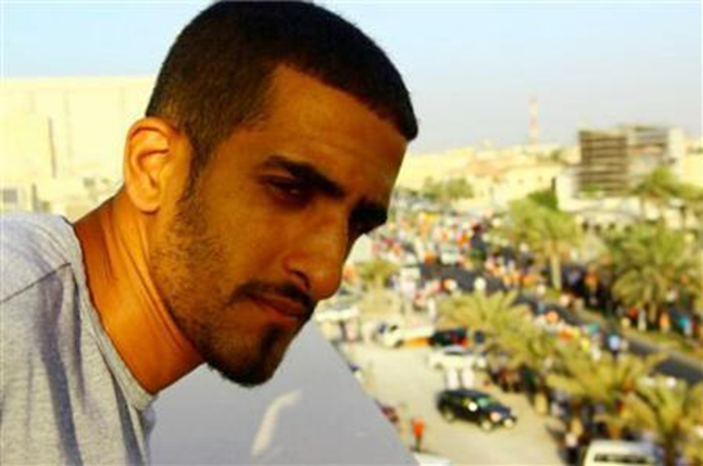 Tagi Abdalla al-Maidan is a 26-year-old US citizen who was born in Connecticut. He lived in Connecticut until he was four years old, after which his family moved to Saudi Arabia. In 2002, Tagi, his mother, Amina, and six siblings moved to Bahrain. Tagi’s mother is Bahraini and his father is Saudi, which also makes Tagi a Saudi citizen.

On October 7, 2012, seven masked men and a police captain wearing face masks and civilian clothing entered the family’s apartment and arrested Tagi without presenting an arrest warrant. His family was not told why he was being arrested, nor were they told where he was being taken.

Tagi, who has a spinal condition which requires consistent medication to treat, was taken to Dry Docks prison, having been accused of participating in an incident on October 5, 2012 involving the burning of a police water truck. Amina and Tagi both assert that Tagi was at home all day on October 5 and that he has never engaged in any criminal activity. However, after being subjected to torture, Tagi signed a false confession stating that he threw a stone at the vehicle.

A police officer serving as a government witness who claimed to possess a video of Tagi’s alleged criminal activity failed to appear before the court when summoned. When the presiding judge ordered the prosecution to provide the video evidence, they submitted a letter to the court stating that they did not have footage of the incident. Despite the lack of evidence presented by the prosecution, on September 24 2013, the Bahraini court convicted Tagi of assaulting a police officer and sentenced him to 10 years in Jaw Prison.

In phone calls with his mother, Tagi has indicated that he has been beaten while in prison, and was also subjected to stress positions, threatened with rape, forbidden from using the restroom, and threatened with extradition to Saudi Arabia to be imprisoned there (Saudi’s prisons are notorious for their abuses). Tagi was also threatened that if he did not confess, his mother would be brought to the prison, raped and subjected to the same abuses as Tagi. Tagi has been unable to find a bed, and is forced to sleep on the floor, thereby exacerbating his spinal condition.  He continues to be denied access to medication for his spinal condition and his stomach ulcer.

At its 69th Session in 2014, the United Nations Working Group on Arbitrary Detention officially declared that the Government of Bahrain is arbitrarily detaining Tagi al-Maidan and has inadequately responded to allegations of torture. In rendering its decision regarding the arbitrary nature of al-Maidan’s detention, the Working Group on Arbitrary Detention concluded: “The deprivation of liberty of Tagi al-Maidan is arbitrary, being in contravention of articles 5, 9, 10, and 11 of the Universal Declaration of Human Rights and articles 7, 9 and 14 of the International Covenant on Civil and Political Rights.”

The US Consulate in Bahrain has sent staff to attend Tagi’s hearings and have also intervened with prison officials on Tagi’s behalf on a few occasions. The U.S. State Department recently commented on al-Maidan’s case, stating that it had concerns regarding the fairness of al-Maidan’s trial, as well as his “safety and welfare, [and] his treatment in prison, including his medical and nutritional needs.” The British Embassy is also in contact with the US Consulate on Tagi’s case. The US Consulate should continue monitoring the situation and urge Bahraini officials to: 1) ensure access to proper nutrition, medication, and specialist care; 2) investigate allegations of torture; 3) urge for protections against physical and psychological abuse; and 4) allow for family visits.