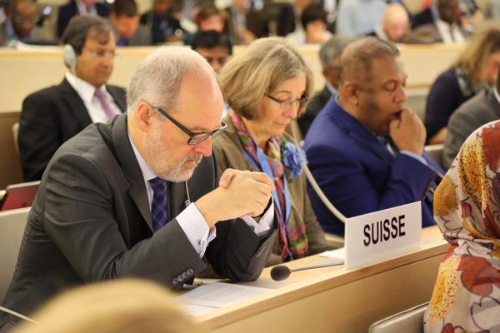 Americans for Democracy & Human Rights in Bahrain (ADHRB), the Bahrain Center for Human Rights (BCHR), and the Bahrain Institute for Rights and Democracy(BIRD) welcome yesterday’s joint statement raising the serious concern of 33 States about the human rights situation in Bahrain during the 30th Session of the UN Human Rights Council. This joint statement, led by Switzerland, raises the persistent concerns of the international community regarding a wide variety of human rights abuses in Bahrain, including the ongoing use of torture, excessive and indiscriminate use of force, and restrictions on the freedoms of opinion, expression and assembly. This latest joint statement builds on four previous joint statements in the Human Rights Council since 2012, which raised similar concerns and enjoy a growing coalition of cross-regional support.

Click the picture above to watch the Swiss delegation deliver the Joint Statement on behalf of 33 states at the 30th Session of the Human Rights Council in Geneva. 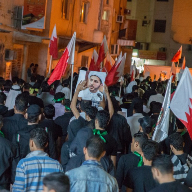 From BICI to UPR, Progress is Scarce in Bahrain
Muftah reports that “Washington can’t make up its mind on Bahrain” and notes the lack of progress in human rights reforms in Bahrain since the 2011 BICI report. Several members of Congress have been working to stop the U.S. from lifting the arms sale ban on Bahrain in light of its human rights abuses and failure to implement BICI reforms.
Read More 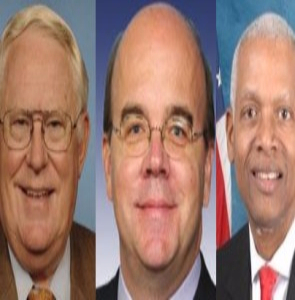 ADHRB Applauds Introduction of House Companion Bill to BICI Accountability Act of 2015
Americans for Democracy & Human Rights in Bahrain (ADHRB) welcomes the introduction of H.R. 3445, the bipartisan resolution in the United States House of Representatives that would reinstate the US arms sales ban to Bahrain until the country implements all 26 recommendations of the Bahrain Commission of Inquiry (BICI).
Read More 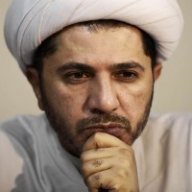 September Champions for Justice: Bahrain’s Imprisoned Politicians
This month, Americans for Democracy & Human Rights in Bahrain (ADHRB), the Bahrain Institute for Rights and Democracy (BIRD), and the Bahrain Center for Human Rights (BCHR) call attention to leaders of the political opposition imprisoned in the past year.
Read More 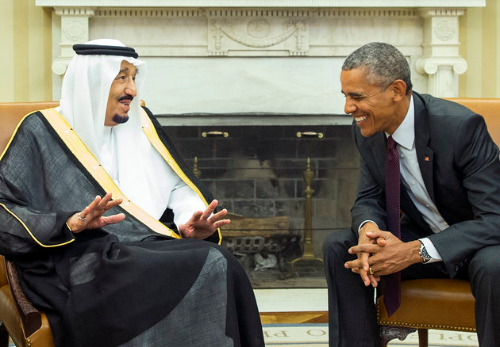 Lawyers for the jailed Saudi Arabian human rights lawyer Waleed Abu al-Khair capitalized on the news of the Saudi king’s visit by trying to present him with a Change.org petition calling for al-Khair’s release. “Waleed Abu al-Khair is a human rights lawyer of the highest order and his imprisonment is antithetical to justice and all legal principles,” the petition reads. The petition attracted 12,623 signatures by 31 August. Kate Kizer, U.S. Advocacy Officer for Americans for Democracy & Human Rights in Bahrain, criticized the imprisonment of human rights activist Waleed Abu al-Khair, stating that al-Khair, “like so many other human rights defenders in the Kingdom, has been the victim of the country’s anti-terrorism law.” She added, “rather than using this legislation to actually prosecute and counter threats from terrorism, the Government of Saudi Arabia has continued to focus its prosecutorial efforts, by and large, on those Saudi citizens who advocate for human rights, free speech, and, in the case of Waleed Abu al-Khair, for defending other human rights activists.”
Read more…