Since arresting leading Shia cleric Sheikh Nimr Baqir al-Nimr in July 2012, the Government of Saudi Arabia has worked to propagate a series of misperceptions aimed at degrading Sheikh Nimr’s record as a peaceful opposition figure. However, a review of Sheikh Nimr’s speeches and opposition activities demonstrates that government claims do not hold up to scrutiny.

Myth: Sheikh Nimr is an agent of Iran.

Fact: Sheikh Nimr has repeatedly called for improvements in the situation of the Saudi Shia and an end to government injustice against them, independent of any outside considerations. His efforts to draw attention to the systematic discrimination suffered by Shia in education, employment, religion, and the judiciary, among other sectors, have earned him a following among many in the predominantly Shia Eastern Province. These same efforts, however, have won him the stern disapproval of the Saudi government, which does not hesitate to label him as a Shia agent of Iran promoting unrest and cross-border sectarian unity.

In a sermon given in spring 2012, after providing a detailed history of how Saudi Shia uprisings predated the Iranian revolution, Sheikh Nimr stated, “We have no ties with Iran or any other country. We are connected to our values, and we will defend them, even if your media continues with its distortions.” 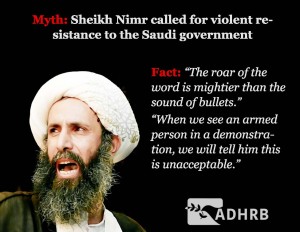 Fact: The Saudi government claims that Sheikh Nimr incited violent resistance through his sermons and activities in the Eastern Province. In November 2015, advisors to Saudi Defense Minister Prince Mohammed bin Salman published a statement claiming, “the al-Nimr family members pursued violence and attacks on security forces and government facilities beside terrorizing civilians.” During Sheikh Nimr’s trial, the government accused and convicted him of inciting sectarian strife and encouraging rioting and the destruction of property.

But Sheikh Nimr’s speeches outline a different vision for resistance to the Saudi government. In explaining how the movement should operate, Sheikh Nimr repeatedly emphasized that “the roar of the word” is mightier than the sound of bullets. He explained that authorities would want protesters to use weapons, because the security forces know that they have the military advantage. As a result, Sheikh Nimr insists that the protesters rely on their words – they can defeat the government by adhering to their principles, but they have no chance if they choose the path of violence. In another sermon, he stated, “When we see an armed person in a demonstration, we will tell him this is unacceptable. Go home, we don’t need you.” Both morally and strategically, Sheikh Nimr believed that violence was not the way to achieve results. 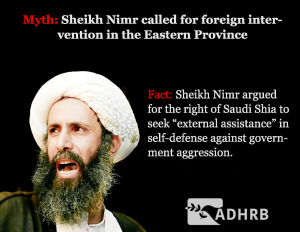 Fact: In March 2009, Saudi Arabia issued an arrest warrant for Sheikh Nimr after he suggested that the Eastern Province would consider secession if the government did not respect the rights and dignity of the Shia community. His words stoked government fears that Saudi Shia would call for foreign assistance in toppling the Saudi government. In 2008, Sheikh Nimr reportedly stated that he would always support “the people” in any conflict with the government and argued for the right of Saudi Shia to seek “external assistance” in self-defense against government aggression. He has never called for any other country to intervene in the Eastern Province or in Saudi affairs. 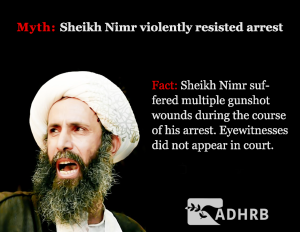 Fact: The circumstances surrounding Sheikh Nimr’s arrest remain unclear, with different organizations reporting different versions of the story. According to the Saudi government’s report, Sheikh Nimr confronted security patrols during their pursuit of a wanted suspect who had attacked security forces in the past. Security forces called upon Sheikh Nimr to back down, but he failed to do so, and security forces moved in to make the arrest. While they were placing him in the patrol car, two other cars drove up and started firing on the patrol. In the confusion, Nimr sustained gunshot wounds.

However, local sources have informed ADHRB that the arrest took place differently. In this account, armed officials chased Sheikh Nimr in his car. The chase continued until he crashed his car, at which point authorities forced Sheikh Nimr out of the car and shot him in the leg. He suffered multiple injuries in the incident.

What is clear is that Sheikh Nimr suffered multiple gunshot wounds and injuries in the course of his arrest. At his trial, the government denied the defense team the opportunity to cross-examine the police officers who had violently arrested Sheikh Nimr. 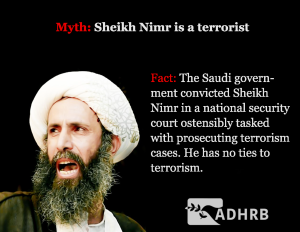 Myth: Sheikh Nimr is a terrorist.

Fact: The government and the Saudi media have gone to great lengths to paint Sheikh Nimr as a terrorist. Recent media reports have lumped him in with al-Qaeda terrorists and “terrorists from Awamiyya.” One goes so far as to equate him with a leading al-Qaeda theorist, reporting that Nimr and the al-Qaeda member represent two sides of the same coin. Other Saudi officials have accused the Nimr family of terrorizing civilians. The Saudi government tried and convicted Sheikh Nimr in the Specialized Criminal Court (SCC), a national security tribunal ostensibly tasked with prosecuting crimes related to terrorism.

Sheikh Nimr has no connections to any terrorist cells and has not engaged in any violent activities directed toward the Saudi government or Saudi civilians. Since its inception in 2008, Saudi authorities have used the SCC to try numerous activists on terror charges related to their free expression. Similarly, its conviction of Sheikh Nimr stemmed from the expression of dissent through his sermons, and not from any violent activity. 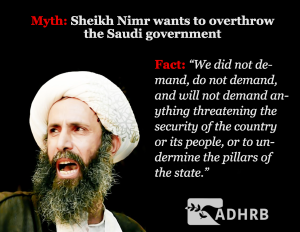 Fact: Sheikh Nimr’s self-proclaimed main goal is to achieve equality and justice for Saudi Arabia’s Shia minority, not to topple the government. Despite this, the Government of Saudi Arabia leveled a number of charges against Sheikh Nimr based on his sermons and his involvement in the 2011-2012 protest movement. In the early sessions of Sheikh Nimr’s trial, the prosecutor presented a list of 33 charges against him, including giving speeches that threaten national unity and inciting people to demonstrate. The court sentenced Sheikh Nimr to death on 15 October 2014 for breaking allegiance with the ruler, inciting sectarian strife, and encouraging demonstrations, among other charges.

In a 2007 petition to the administrative governor of the Eastern Province, Sheikh Nimr presented a list of demands outlining his vision for reform. In the petition’s preamble, he stated, “We did not demand, do not demand, and will not demand anything threatening the security of the country or its people, or to undermine the pillars of the state, or to shorten its age or weaken its institutions.” His stated demands pertain to respecting religious freedom and achieving equality.