After the Government of Saudi Arabia executed 47 people on 2 January 2016, it made several statements in an attempt to justify the mass execution and quell international criticism. In these statements, Saudi Arabia claimed that all executions resulted from fair judicial proceedings that strictly followed the Saudi legal process. However, the government’s claims contained a number of inaccuracies that misrepresented the defendants’ experiences within the Saudi criminal justice system.

These inaccuracies were perhaps most glaring in the case of Sheikh Nimr Baqir al-Nimr. Since his execution on 2 January 2016, the Government of Saudi Arabia has continued to disseminate misinformation about his life and death, especially regarding his trial and detention. The following are just a few examples of how the Government of Saudi Arabia has persisted in spreading misinformation about Sheikh Nimr in an effort to justify his execution. 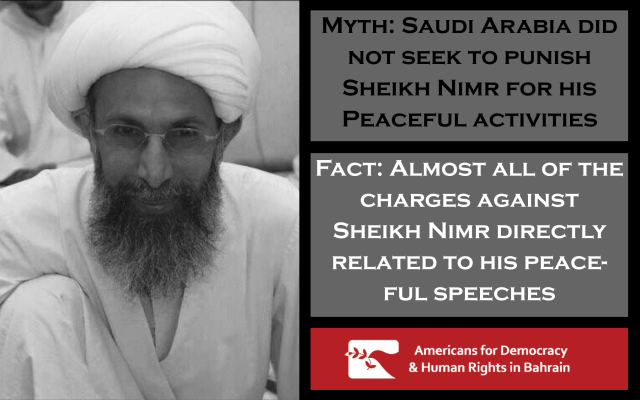 Myth: The charges against Sheikh Nimr did not seek to punish him for his peaceful activities.

Fact: Almost all of the charges against Sheikh Nimr directly related to his peaceful speeches, sermons, and protest activities. In Sheikh Nimr’s first court hearing, the prosecutor levied 33 charges against him. Initially, the prosecutor charged him with banditry and other related offenses, based on several security officers’ claim that Sheikh Nimr had fired a gun at them during his arrest. Sheikh Nimr’s defense team, as well as independent human rights organizations, maintain that this never occurred. In fact, it was security forces who fired on Sheikh Nimr during the arrest.

To make the case against Sheikh Nimr, the prosecutor heavily relied on Sheikh Nimr’s speeches and sermons. Local sources informed ADHRB that the public prosecution accused him of delivering sermons that disrupted national unity, insulted the king, supported anti-state chants, called for the remembrance of victims of government violence, and encouraged people to demonstrate. During the trial, the judge ordered the prosecutor to present 21 speeches delivered by Sheikh Nimr as evidence against him. An Amnesty International review of his speeches found that he had not advocated for violence and was only exercising his right to free expression.

Ultimately, the SCC sentenced him to death on a list of vague charges related to his peaceful activities. The evidence to support the charges came almost solely from Sheikh Nimr’s sermons and interviews. 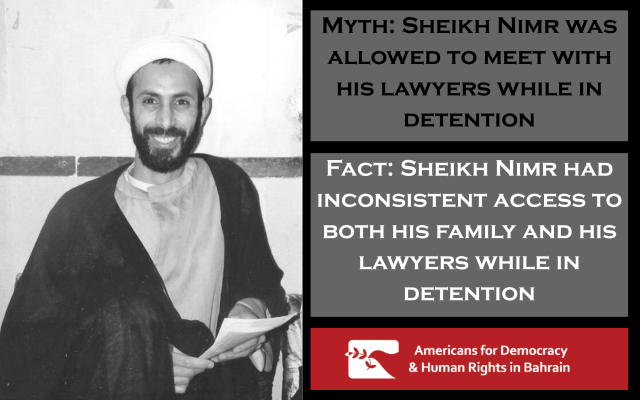 Myth: Sheikh Nimr was allowed to meet and communicate with his lawyers while in detention. 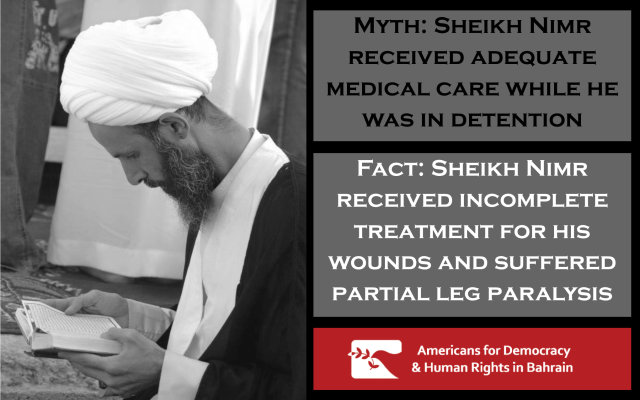 Myth: Sheikh Nimr received adequate medical care while he was in detention.

Fact: The Government of Saudi Arabia claimed that it provided Sheikh Nimr all necessary medical attention during his detention. It further asserted that it is false that he did not receive treatment for his injured leg, stating that Sheikh Nimr’s leg “was not injured.”

These claims are untrue. During the course of his arrest, Saudi security forces shot Sheikh Nimr multiple times, wounding his leg and other parts of his body. According to Human Rights Watch, Saudi doctors refused to remove a bullet from his leg and stated that Sheikh Nimr had already received adequate treatment for his wounds. As a result of his incomplete treatment, Sheikh Nimr suffered partial paralysis in his leg. Staff at the prison hospital where he was held did not provide him regular access to medical care and physical therapy, leaving him in constant pain. Furthermore, doctors delayed surgery to remove a bullet from his back until immediately prior to his execution. 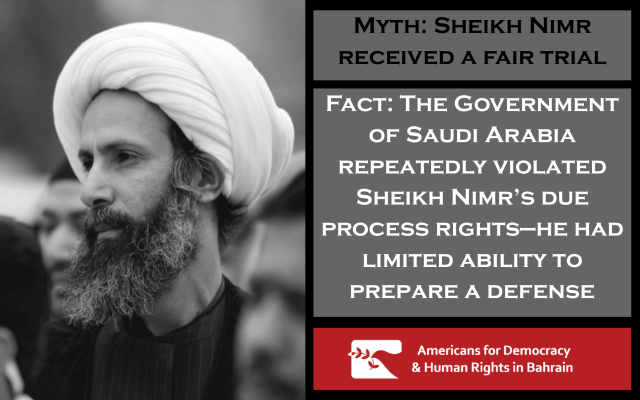 Fact: The Government of Saudi Arabia repeatedly violated Sheikh Nimr’s due process rights over the course of the legal proceedings. After his first hearing, the prosecution failed to present Sheikh Nimr’s legal team with a copy of the charges against him, restricting their ability to prepare an adequate defense. On multiple occasions, the judge either failed to notify Sheikh Nimr’s defense team of a hearing or informed the team only one day in advance.

Furthermore, the judge accepted written testimony from the police officers who arrested Sheikh Nimr, but prevented Sheikh Nimr’s legal team from cross-examining the officers. Saudi officials also forced Sheikh Nimr’s lawyer to sign a pledge that he would not share court documents.

These abuses, among others, compromised the fairness and openness of Sheikh Nimr’s trial. 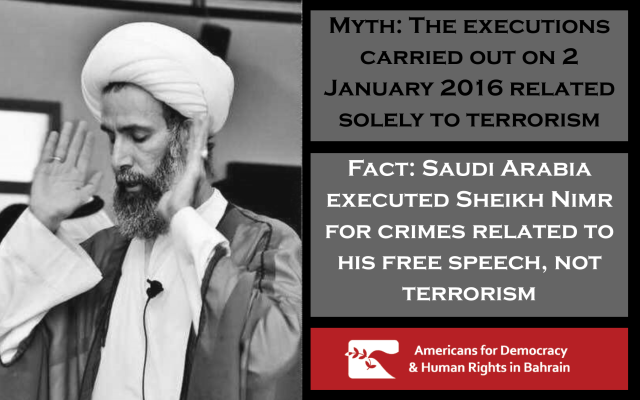 Myth: The sentences carried out on 2 January 2016 were focused solely on terrorist acts undertaken by those convicted.

Fact: The Government of Saudi Arabia executed Sheikh Nimr for crimes related to his free speech. Though Sheikh Nimr was tried and convicted by the Specialized Criminal Court (SCC), Saudi Arabia’s terrorism tribunal, he never had any ties to terrorism or terrorist activity. Since the SCC’s establishment in 2008, Saudi Arabia has used the court to prosecute and convict a number of human rights activists, including Sheikh Nimr, for their peaceful activities.

The judge ultimately sentenced Sheikh Nimr to death on charges of “disobeying the ruler,” “inciting sectarian strife,” and “encouraging, leading, and participating in demonstrations.” All of these charges related to Sheikh Nimr’s peaceful exercise of his right to free speech in his sermons and speeches. The intentionally broad wording of Saudi Arabia’s 2014 terrorism law, which classifies any acts that “risk national unity” or “harm the reputation of the country” as terrorism, enabled the government to prosecute Sheikh Nimr as a terrorist for exercising his right to free expression.