From 29 February to 24 March, Americans for Democracy & Human Rights in Bahrain (ADHRB) took part in the 31st Session of the United Nations (UN) Human Rights Council (HRC) in Geneva to raise awareness of human rights violations in Bahrain, Saudi Arabia, and other Gulf Cooperation Council (GCC) countries. During the Session, ADHRB met with dozens of UN Member States, NGOs, UN officials, and members of the UN Special Procedures. Additionally, ADHRB hosted two side events, participated in a third, and conducted a series of oral interventions before the Council.

Prior to the opening of the HRC, on February 25, the Special 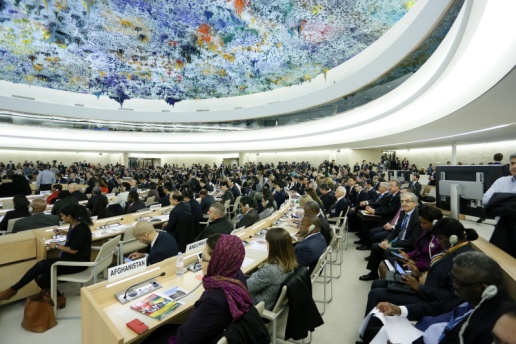 Procedures of the HRC released their most recent joint communications report. The report documents allegations of human rights abuses from around the world. In this latest report, the Special Procedures cited six new cases in Bahrain and ten in Saudi Arabia highlighting these kingdoms as among the most regular offenders of human rights throughout the world. 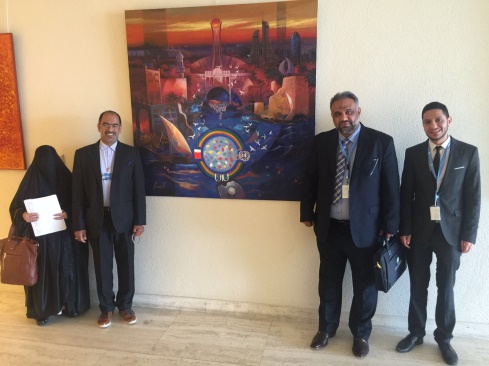 g of the HRC, ADHRB submitted a written statement for the Council’s official record on human rights in Saudi Arabia, particularly as regards Saudi Arabia’s continued practice of death sentences and its suppression of civil society. In the statement, ADHRB expressed concern for Saudi Arabia’s increased use of the death penalty, and its continued targeting of human rights defenders. Throughout 2015, the government continued to arrest, imprison, and sentence human rights activists. In 2015, the Kingdom executed more than 150 people, constituting the highest number of executions in a single year since 1995.

In conjunction with its partner organizations, Bahrain Institute for Rights and Democracy (BIRD), Bahrain Center for Human Rights (BCHR), and the European Center for Democracy and Human Rights (ECDHR), ADHRB also submitted another written statement on the human rights situation in Bahrain, particularly concerning Bahrain’s abuse of its anti-terror legislation and its increased use of capital punishment. In its statement, ADHRB raised the 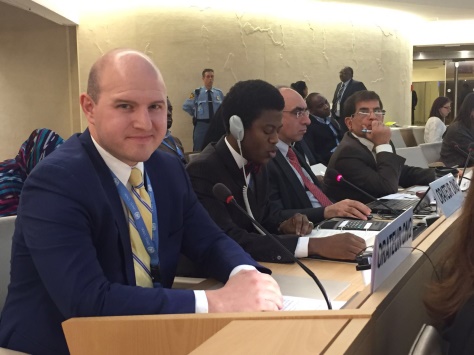 issue of the Government of Bahrain’s ongoing assault on freedom of expression and assembly, and its increased efforts to criminalize dissent and silence opposition voices. Since 2011, the Government of Bahrain has utilized vague legislation, like its anti-terror laws, to suppress political dissidents, human rights defenders, and journalists. In recent years, Bahrain has increased its revocation of citizenship, culminating in stripping 208 Bahrainis of their nationality in 2015. Also in 2015, the number of detainees on death row increased by 75 percent, though many death penalty cases lack evidence linking individuals to the crimes for which they are prosecuted.

On March 3, Yusuf al-Hoori delivered an oral intervention on behalf of ADHRB, in conjunction with partner organizations during the clustered interactive dialogue with the Special Rapporteur on the situation of human rights defenders. In his intervention Mr. al-Hoori responded to the Special Rapporteur’s comments, noting the cases of prominent human rights advocates like Nabeel Rajab, Naji Fateel, Abdulhadi al-Khawaja, and Abduljalil al-Singace. ADHRB also noted Bahrain’s technological efforts to monitor email, social media accounts, personal documents, and control cameras of human rights defenders, both in Bahrain, and abroad. 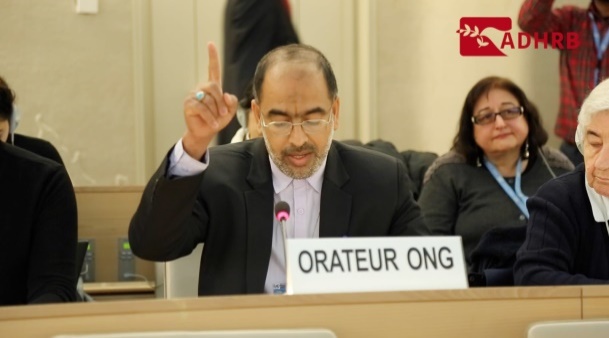 ternational advocacy officer, Michael Payne delivered an oral intervention, drawing the Council’s attention to the status of persons with disabilities in the GCC, noting that aside from Saudi Arabia, no other GCC state has ratified the Optional Protocol on the Rights of Persons with Disabilities. Bahrain continues to torture and arbitrarily detain persons with disabilities, including Dr. Abduljalil al-Singace, and Shia cleric Sayed Hussein al-Guraifi.

On behalf of ADHRB and its partner organizations during the clustered debate on Violence Against Children and the Rights of the Child, Ali Ahmed al-Jazeeri delivered an oral intervention bringing the Council’s attention to abuses committed by Bahraini security forces against children. Bahraini security forces, he noted, arbitrarily arrest, forcibly disappear, torture, and detain children in adult prisons. Over the last years, he states, security forces have killed nearly 60 children.

delivered two interventions. During the interactive dialogue with the Special Rapporteur on Torture on March 8, Ebrahim Demistani on behalf of ADHRB, in conjunction with partner organizations, delivered an oral intervention on the widespread and systematic use of torture and mistreatment as a form of collective punishment following clashes in Bahrain’s Jau Prison in 2015. Mrs. Seddiqa al-Jazeeri delivered an intervention during the Clustered Debate on Violence Against Children and spoke about the Government of Bahrain’s continued use of excessive force against demonstrators and children.

On March 9, ADHRB delivered two interventions. Ali Aldubaisy spoke on Saudi Arabia’s executions and violation of the right to life and referenced the High Commissioner for Human Rights’ statement of concern about the 47 executions on January 2, 2016. Sayed Ahmed Alwadaei also delivered an oral intervention. Speaking during an Interactive Dialogue with the Special Rapporteur on Freedom of Religion, he responded to the Special Rapporteur’s communication regarding Bahrain’s targeted, systematic discrimination against its religious and ethnic minorities, including its Shia, Baharna, and Ajam populations, reporting that the Government of Bahrain regularly targeted Shia citizens for participating in protests, and has revoked the citizenships of many Shia under its anti-terror law, in addition to destroying a number of Shia mosques. 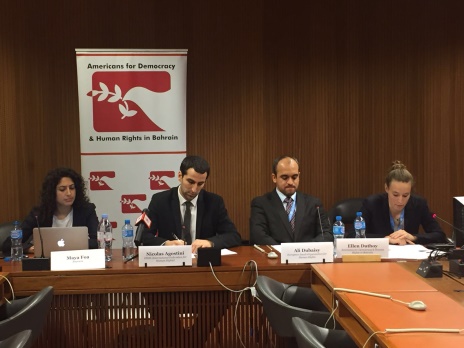 On March 10, the High Commissioner noted that despite Bahrain’s progress, political opponents, journalists, and human rights defenders continue to be silenced by arrests, citizenship revocations, and deportations.

Sayed Ahmed Alwadaei of BIRD delivered one of the two interventions on March 11. In addition to speaking on Bahrain’s disregard for the work of the UN Special Procedures, and noting Bahrain’s continual refusal to allow any members of the Special Procedures to visit the country, he asked the High Commissioner what tangible indications exist as to the Government of Bahrain’s intention to cooperate with international standards of human rights.

In response to ADHRB’s inquiry, the High Commissioner responded 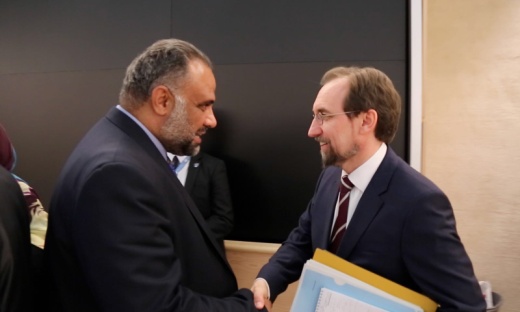 saying “little has been done in the fields of accountability and ending impunity, particularly in relation to violations committed against protesters and detainees, including alleged acts of torture,” and he called on the government to “release all those arrested in connection with peaceful protests, particularly minors and women, and to reconsider the July 2014 amendments to the Nationality Law.”

ADHRB hosted a panel moderated by Nicolas Agostini from FIDH, entitled “Capital Abuse: the Arbitrary Destruction of Life in Saudi Arabia.” The panelists included Ellen Duthoy of ADHRB, Maya Foa from Reprieve, and Ali Aldubaisy from the European-Saudi Organization for Human Rights. The panel discussed the use of executions in Saudi Arabia, particularly in the context of Saudi Arabia’s position as a member of the Human Rights Council. 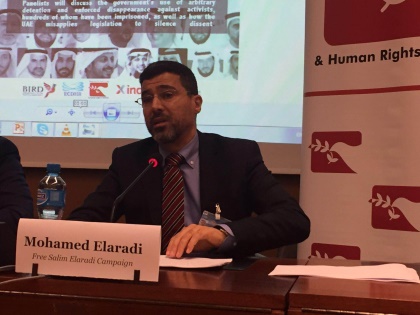 On March 15, Ali Aldubaisy delivered an intervention addressing executions in Saudi Arabia, which constitute only some of its systematic human rights violations; others include arbitrary arrest, torture, and enforced disappearance. ADHRB’s international advocacy officer, Michael Payne, also delivered an intervention, and, speaking on behalf of ADHRB and its partner organizations, noted the high number of arbitrarily detained political prisoners in Bahrain, including Hassan Mushaima, Abdulwahab Husain, Sheikh Ali Salman, and Fadhel Abbas.

Also on March 15, ADHRB participated in a panel side event entitled “The State of Repression: the United Arab Emirates.” Michael Payne of ADHRB moderated the panel, with panelists Mads Andenaes, the former Chair-Rapporteur of the UN Working Group on Arbitrary Detention, Rori Donaghy, a reporter for Middle East Eye and the founder of the now-defunct Emirates Center for Human Rights, Ahmed Mansoor, a prominent UAE activist and former prisoner, and Mohammed Elaradi, a former prisoner in the UAE. The panel discussion focused on the evolution of repression in the UAE and the shrinking space for critical voices in the country.

On March 16, Nedhal Salman of BCHR and Yousif Baddah delivered interventions before the Council. Speaking on behalf of ADHRB and its partner organizations, Yousif addressed extrajudicial killings in Bahrain, including that of his son, Ali al-Baddah, by security forces. Nedhal, also speaking, addressed Bahrain’s failure to cooperate with the Special Procedures, particularly concerning the treatment of children and women human rights defenders.

ADHRB international advocacy officer, Michael Payne, delivered ADHRB’s only intervention on March 17, speaking during the Universal Periodic Review outcome debate for Oman. In his intervention, he expressed continued concern for the human rights situation in Oman, noting that while Oman pledged to review its legal framework to safeguard the freedom of expression, it continues to arrest Omanis for exercising their freedom of expression. 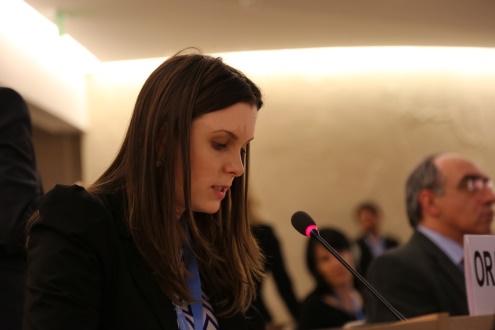 regarding the Durban Declaration, and two on the Vienna Declaration and Programme of Action (VDPA). Amanda Milani highlighted Saudi Arabia’s discriminatory policies that target its Shia minority. Diam Abou-Diab expressed concern regarding the GCC’s ongoing policies of discrimination against stateless populations, known as the Bidoon. Amanda Milani delivered a second intervention on behalf of ADHRB, BIRD, and BCHR in which noted that the GCC countries have ineffective national human rights institutions despite the VDPA’s call to provide effective institutions to tackle human rights problems. Diam Abou-Diab likewise addressed arbitrary detention of activists in the UAE despite the VDPA’s condemnation of the practice.

On March 23, the penultimate day of the Council, ADHRB delivered four interventions. Isabel Cerda Marcos delivered two interventions, one on behalf of ADHRB, BIRD, and BCHR in which she called on Bahrain to end impunity, and to release those arrested in relation to peaceful protests. In her second addressed Saudi Arabia’s technical cooperation with the Office of the High Commissioner, and its need for further engagement. Diam Abou-Diab likewise delivered two interventions. In one, speaking on behalf of ADHRB, BIRD, and BCHR, she noted Bahrain’s continued lack of cooperation with the UN human rights mechanisms. Her second intervention concerned Qatar’s failure to guarantee the rights of artists and laborers, citizens and non-citizens alike, in the run-up to the 2022 FIFA World Cup.