Rajan, a migrant worker from Nepal, is currently building the biggest shopping mall in Doha, Qatar. He recently told The Guardian that his employer confiscated his passport and cut his salary last summer.  He alleges that his employer, a subsidiary of a major U.K.-based construction firm, has prohibited him from leaving the country. When he asked his employer to go home, the company told him to stay put “or there might be problems.”

Rajan is one of thousands of migrant workers laboring on construction projects in Qatar. The Gulf state has come under increasing scrutiny in the last four months due to well-documented abuse of migrant workers and allegations of forced labor. All migrant workers are governed by a controversial sponsorship system known as kafala, which tethers a worker’s visa and residency permit to his/her employer. Workers are entirely dependent on their sponsors and are rendered extremely vulnerable to abusive practices, such as the withholding of wages, the confiscation of passports, and in Qatar specifically, the denial to leave the country without employer permission. 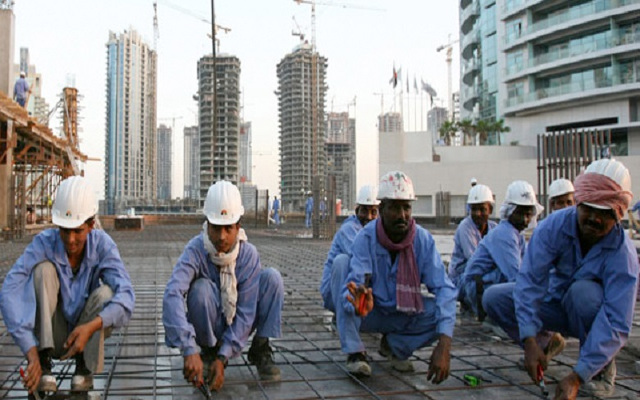 A recent investigation released by The Guardian last week highlights the complicity of U.K.-based construction firms in the violation of worker’s rights in Qatar. Balfour Beatty and Interserve, two of the largest construction companies in the United Kingdom, have been accused of mistreating workers who are employed in their labor supply companies in Doha. Migrant workers allege that their employers, BK Gulf and Gulf Contracting Company, subsidiaries of Balfour Beatty and Interserve respectively, have withheld their wages and have barred them from leaving the country.

The Guardian’s investigation comes on the heels of a damning report released by Amnesty International last month that alleges severe forms of mistreatment for migrant workers constructing the Khalifa International Stadium for the 2022 FIFA World Cup. The report highlights FIFA’s “shocking indifference to appalling treatment of migrant workers” in Qatar. Workers interviewed by Amnesty International allege payment of exorbitant recruitment fees, the withholding of wages, the confiscation of passports and identity documents, and threats of denunciation to immigration authorities.

For years Qatar has promised to reform its sponsorship system to alleviate the abuse levied against workers, but enforcement and implementation remain stagnant. In October 2015, Qatari authorities announced new changes to its sponsorship law that it states will take effect in late 2016, but left several exploitative aspects intact. Workers still need permission from their employers to change jobs and leave the country. Earlier this year, delegates from the International Labor Organization visited Qatar and found workers stranded without pay and their passports. As a result, the ILO announced that it will give Qatar one year to end forced labor and make much-needed changes to its labor laws to better protect workers before it launches a formal commission of inquiry.

While international agencies and rights groups must put pressure on Qatar to reform its exploitative labor system, construction companies like Balfour Beatty and other international bodies like FIFA cannot evade accountability. The kafala system should be abolished and labor law protections expanded to protect migrant populations who remain excluded from these laws, such as domestic workers, but international companies like FIFA and Balfour Beatty are just as complicit in abuse as their Qatari counterparts.