Americans for Democracy & Human Rights in Bahrain (ADHRB) will be hosting parliamentary panel on forced labor and sex trafficking, which affects millions of migrant workers in the Gulf Cooperation Council (GCC). The GCC-wide kafala system is a mechanism through which governments effectively enable forced trafficking and labor. In addition, individual states maintain a gender-biased legal system and status quo that amplify the second class status of migrant women in particular. These issues are among the topics that will be discussed at this event. Speakers include: 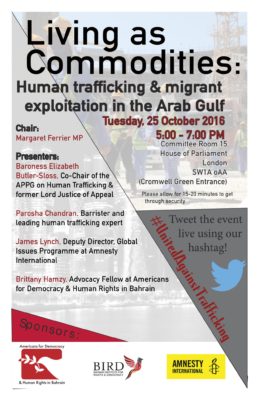