On 13 June 2017, the International Labour Organization (ILO) reviewed progress made by the Government of Bahrain toward rectifying outstanding complaints of labor discrimination, implementing the two associated Tripartite Agreements of 2012 and 2014, and generally adhering to international standards for protecting the rights of workers. It found that the Bahraini authorities have largely failed to address these key labor issues: the government has not provided evidence of worker reinstatements in line with the 2014 deal; extended equal worker protections to public sector employees; or undertaken measures to eliminate direct or indirect discrimination and harassment in the workplace in accordance with ILO conventions. Representatives of Bahrain’s chief labor union, the General Federation of Bahrain Trade Unions (GFBTU), as well as international groups like the American Federation of Labor and Congress of Industrial Organizations (AFL-CIO), additionally raised grave concerns over economic reprisals against individuals for expressing political opinions; arbitrary deprivation of nationality resulting in statelessness; abusive conditions for migrant workers; gender-based discrimination; anti-Shia prejudice and preferential recruitment of foreign workers; gaps in the labor law; and the government’s continued refusal to fully adhere to the 2014 Tripartite Agreement. Moreover, it was noted that the government temporarily imposed a travel ban on GFBTU leadership, interfering with the representatives’ ability to travel to the ILO session, and has increasingly undercut the group’s ability to effectively organize. Ultimately, the ILO called on the Government of Bahrain to establish a national plan to eliminate labor discrimination and to expand worker protections, noting that the government’s refusal to provide substantial information on these issues, particularly its implementation of the Tripartite Agreements, undermines its credibility. The ILO concluded that “the fastest, safest, and surest road forward” is for the Bahraini government to ensure equality before the law.

Americans for Democracy & Human Rights in Bahrain (ADHRB) welcomes the ILO’s review and echoes the concerns and recommendations expressed therein. Coinciding with the ILO’s session, we are also pleased to release Bahrain’s Forgotten Workers: A Status Report on Labor Discrimination and Forced Dismissals since 2011 – our own assessment of the Bahraini government’s implementation of the Tripartite Agreements and its measures to combat labor discrimination. Please find the introduction and key findings below, and click here for the full report.

Beginning in February 2011, mass pro-democracy demonstrations took place across Bahrain. The government’s use of extreme force to suppress the gatherings killed dozens, but the authorities also leveraged their inﬂuence on the economy to punish citizens who called for reform. In the immediate months after the ﬁrst protests – and also in the years since – Bahraini oﬃcials harassed and dismissed thousands of students, workers, and trade union representatives in reprisal for their alleged involvement in the protest movement. The International Trade Union Confederation (ITUC) described the government’s campaign as “an economic massacre following the deplorable human massacre.”

As international organizations started to ﬁle oﬃcial complaints over the mass dismissals, the Government of Bahrain gradually began to reinstate some of the aﬀected workers. In early 2012, the government signed a Tripartite Agreement backed by the International Labour Organization (ILO) committing to restore those dismissed to their previous positions. By 2014, however, the Tripartite Committee that was established under the agreement – consisting of the Bahraini government, the General Federation of Bahrain Trade Unions (GFBTU), and the Bahrain Chamber of Commerce and Industry (BCCI) – identiﬁed 165 cases that remained unresolved. The parties reached a Supplementary Tripartite Agreement that year to rectify this ﬁnal set of dismissals.

Yet more than two years later, Americans for Democracy & Human Rights in Bahrain (ADHRB) has received credible reports from local labor activists that well over half of these workers remain dismissed from their positions. Of those that have been reinstated, many have been deprived full compensation and beneﬁts as aﬀorded to them under the Tripartite Agreements.

ADHRB’s new report, Bahrain’s Forgotten Workers, provides a status update on the implementation of the Tripartite Agreements, as well as a broader look at labor discrimination in Bahrain. It speciﬁcally highlights systemic abuses faced by many migrant workers and by the kingdom’s Shia majority community, with an added examination of the extreme employment bias exhibited by the Bahraini security forces. Ultimately, the report concludes that the Government of Bahrain has failed to fully implement the Tripartite Agreements and has continued to facilitate discrimination against workers on the basis of their political views, religious beliefs, or national origin.

In 2011, Bahraini authorities arbitrarily dismissed approximately 4,500 workers from their jobs because of their alleged participation in strikes and pro-democracy protests.

In 2012 and 2014, the Government of Bahrain signed successive International Labour Organization (ILO) agreements designed to ensure the reinstatement of these workers.

The 2014 agreement identified 165 cases that had yet to be addressed. Despite indications that positive progress was being made, new evidence compiled by Bahraini labor activists suggests that the vast majority of these cases remains unresolved. Additionally, many of the reinstatements that have occurred fail to meet the conditions laid out in the ILO-backed agreements.

Of the 165 cases, current reports indicate that: 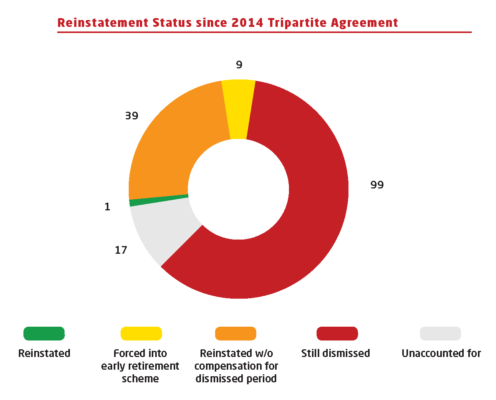