COALITION TO HOST A WEBINAR ON MAY 15 PROVIDING UPDATES ON PRISONERS, STATE OF WOMEN’S HUMAN RIGHTS IN SAUDI ARABIA AND CAMPAIGN PROGRESS

MAY 15, 2020 – Free Saudi Activists, a coalition of women human rights defenders advocating for the release of women’s rights activists from prison, is commemorating the two-year anniversary of the Saudi government arresting multiple activists for defying the government’s ban on women driving and dismantling of the male guardianship system. Imprisoned since May 2018, these women’s rights defenders have been subject to multiple human rights violations under Saudi authority, including electric shocks, flogging and sexual assault. 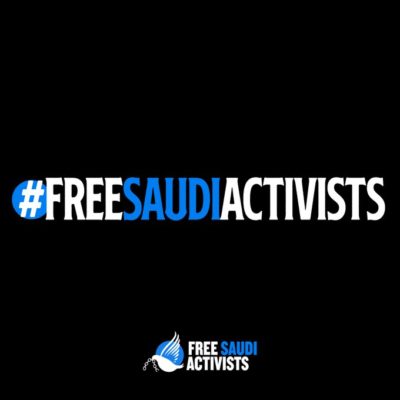 The Free Saudi Activists coalition will be hosting a webinar on May 15 to provide an update on the human rights defenders in Saudi Arabia, as well as the state of women’s human rights across the nation.

“The Saudi women’s rights defenders have suffered inconceivable human rights violations at the hands of the Saudi government and our first priority is to ensure that they are immediately and unconditionally released,” said a coalition member of Free Saudi Activists. “The international and business community must also hold the Saudi government accountable for these injustices in order to move forward with actionable solutions for the advancement of women’s human rights – our newly released advocacy document provides recommendations to both in order to ensure accountability.”

Loujain Al-Hathloul is perhaps the most well-known of the women’s human rights defenders arrested in May 2018. Al-Hathloul was charged with “attempting to destabilise the kingdom” and has spent nearly 700 days in prison, enduring relentles torture at the hands of Saudi authorities while being denied due process, including the right to a fair trial.

Despite a massive public outcry from the United Nations and members of the Human Rights Council calling for an end to impunity for Saudi Arabia, Al-Halthloul and others remain behind bars. At a time when civil society leaders are calling for the release of human rights defenders during the COVID-19 pandemic, now more than ever, repressive regimes need to release defenders who are subject to increased risk during the pandemic.

On May 15, the Free Saudi Activists coalition is hosting a webinar which will include speakers from Women’s March Global, International Service for Human Rights, CIVICUS, Equality Now, Americans for Democracy & Human Rights in Bahrain and the Gulf Centre for Human Rights, who are all members of the Free Saudi Activists coalition. Panelists will detail the progress of the coalition’s advocacy campaigns and future steps that will be taken to ensure the immediate and unconditional release of Saudi women’s human rights defenders.

For more information on the webinar, including registration details, please visit:

ABOUT FREE SAUDI ACTIVISTS
Free Saudi Activists is a coalition of women human rights defenders and organisations advocating for the immediate and unconditional release of Saudi women’s human rights activists from prison.