The report Trends in International Arms Transfers by the Stockholm International Peace Research Institute (SIPRI) has confirmed The United States’ first position in the top 5 largest worldwide arms exporters for several years now. The period from 2015 to 2019 has demonstrated a crucial time for the US to re-establish their commercial supremacy in the global weapons export market. SIPRI reported that the US increased its major arms exports by 23% in 2015-19, reaching a share of 36% of the total global arms exports. In the same period of time, the US was also busy strengthening their already established partnered relationships with their most high profile importers. The US arms policy is not concerned with where or how their weapons are ultimately used. This is despite evidence showing that Saudi Arabia, the UAE and Bahrain have employed US-imported weapons in the bloody war in Yemen, flouting international human rights law and international humanitarian law standards. Profit, it seems, is the core policy of the US government and US military-industrial complex.

In 2013, The US signed the Arms Trade Treaty (ATT), the first example of a global convention aimed at regulating the global trade of weapons. Within the treaty body, a criteria is set out that regulates international arms sales, transfers and decisions. Current state parties to the treaty stand at 105 and 32 signatories. Despite their signature the US has yet to ratify the convention, ensuring its binding application within the US legal order. Moreover, President Trump symbolically withdrew the convention from Senate consideration in April 2019. If the US were to ratify the convention, it would mean that significant changes would have to take place in order to comply with the treaty. The export of weapons to countries involved in the Yemen War or armed conflict that were at odds with international human rights law and international humanitarian law would amount to a blatant violation of article 7 of the convention.

In spite of the US signatory to the ATT, Saudi Arabia, The United Arab Emirates and Bahrain remain among the top countries supplied by the United States. These countries are well known to be human rights violators and often use excessive use of force against civilians, peaceful demonstrators, and target political activists and journalists who are simply attempting to exercise their right to freedom of expression. Since the Saudi ordered the murder of Jamal Khashoggi, a world renowned Saudi government critic and journalist for the Washington Post, there has been renewed scrutiny of the state’s involvement in the war in Yemen. As it stands, 73% of Saudi Arabia’s arms imports come from the US, essentially meaning that American manufactured weapons continue to feed a conflict that employs airstrikes against innocent civilians, cultural heritage sites, and even attacks against hospitals and schools.

Since 2015, more than 100,000 people have been killed in Yemen, including more than 12,000 civilians. The war left 80% of the population, about 24 million people, dependent on aid to survive. One frightening consequence of this conflict is the great famine that is hitting the country. The United Nations warned that 13 million people in Yemen are facing starvation. Despite the enormous loss of lives, resources and human capital, it still remains a top interest for the Saudi and Emirati military to keep the conflict alive even after years of a costly war. At the moment, Saudi Arabia and the UAE are in actual fact in competition with each other for the upper hand in Yemen’s south; they seem so far to have no interest in abandoning the ongoing conflict.

US Exports to Saudi Arabia, UAE and Bahrain in millions 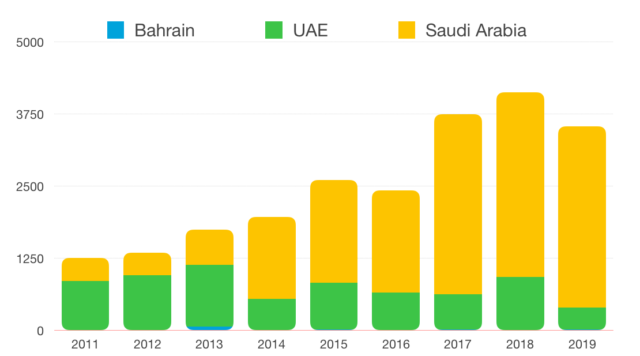 The US Arms Industry’s Influence on US Export Policy

The US and Saudi Arabia have been major arms export partners for decades. And more recently in 2009, the Obama administration has strengthened its partnership by further increasing its weapons sales with the Gulf state. Over the course of the administration, they closed 42 different deals with Saudi Arabia resulting in over $115 billion worth of weapons sales. The export orders cover a broad range of items, including and not limited to; armed vehicles, combat aircraft, combat ships, attack helicopters, air-to-ground missiles, guns and ammunition.

Subsequently, the Trump administration also did not shirk the chance of confirming its well-established trading relationship with Saudi Arabia. On Trump’s first ever presidential trip in May 2017, the president chose to visit Saudi Arabia, an overt public show of support for the gulf state. After the trip, he announced a new and more expansive arms deal with the Arab nation. The deal amounted to  $110 billion in arms sales and included tanks, combat ships, missile defense systems, as well as radar, communications and cybersecurity technology. The US President saw this deal as a great achievement and investment opportunity for the United States. As it was first reported, the agreement was purported to reach around $110 billion worth of upfront investment in the American arms industry and a further $350 billion of additional defense purchases over the next ten years. However, it was later reported that the actual deal would only amount to around $25 billion.  The agreement shows that the US is still committed to delivering a significant proportion of the weapons to Saudi Arabia, despite its involvement in the Yemen conflict that has gone on to cause such egregious humanitarian disaster.

Fueling the Fire: How American Company Manufacturers Supply Weapons to the Bloody Conflict in Yemen

Specific examples of US-manufactured weapons being employed in Yemen have been frequently reported. In 2016, a US-made bomb was used in an airstrike against a crowded market, causing the death of 97 civilians, including 25 children. In 2017, another US-made bomb was used in a deadly strike on the residential homes of Sana’a which killed 16 civilians and maiming 17, including five-year-old Buthaina who lost her entire family in the attack. In 2018,  a US-supplied bomb killed 40 children (6-11 y.o) on a Yemen school bus. CNN reported that the bomb in question was a 500-pound (227 kilograms) laser-guided MK82 bomb made by Lockheed Martin, one of the top US defense contractors. In the same year, another 33 people died when an American-made bomb was used in an airstrike on a Yemeni wedding. The bomb in question was a GBU-12 Paveway II guided bomb, most likely manufactured by the American defence firm Raytheon. Even though there has been clear evidence of the US involvement in the war that has produced thousands of civilian casualties, in 2018 the Pentagon denied that any US bomb was used in Yemen. Independent from US government reporting, in 2019 a Stanford Law School study showed that US military equipment was evident in 25 out of 27 attacks that caused the death of Yemeni civilians.

Bahrain is another common destination for US-made weapons. Both Sipri and Human Rights Watch report that arms deals between the two countries amount to around $110 million over the course of the past 10 years. More recently in 2018, the US State Department approved two proposed arms sales that included  AH-l Z Attack Helicopters, missiles, 3,200 bombs to arm Bahrain’s F-16 fighters fleet and other military equipment. Bahrain is well known for its record of human rights violations against journalists, demonstrators and dissidents. Along with Saudi Arabia, Bahrain is named as another key belligerent involved in the ongoing war in Yemen. Through these arms deals, the United States and other western countries indirectly support the Saudi-led coalition in Yemen because they themselves and arms manufacturers are able to profit off this conflict through the sale of these weapons.

Lockheed Martin is the largest arms manufacturer on the planet. With a staggering $59 billion dollar revenue for the year 2019, 88% of its expenditure was spent on arms sales as of 2017. A deeply American company, approximately half of its annual arms deals are to the US Defense Department. In addition, it is also a preeminent contractor for NASA and the US Department of Energy. As recently as January 6 2020, Lockheed and the US Defense Department secured a $1.9 billion contract to support operations and sustainment of the global F-35 fleet, while improving mission readiness and whilst furthering to reduce the cost. As a result of being such a dominant force in the worldwide arms industry, its products have surfaced in the bloody conflict in Yemen. This includes a paveway guided bomb that struck the crowded market in the village of mastaba that killed 97 civilians, including 25 children. The same kind of bomb was re-sold to the Saudi Arabia in 2019 and to the UAE in 2017, despite the record of it being detonated against innocent civilians in Yemen.

Raytheon is also a prominent producer of the arms that are used in the Yemeni war. The company also boasts one of the top-spots on  the list of the world’s largest arms producers. Raytheon reported its 2018 sales as $27 billion, and in 2017 spent 87% of its company expenditure on manufacturing arms. Its ties to the US government run deep, for instance in October 2019 Raytheon announced a $1 billion dollar contract with the US Department of Homeland Security (DHS) to provide broad support in the field of cyber security. Raytheon manufactures a wide range of products for the weapons market, such as aircraft engines, air defense systems, avionics, drones and missiles. Its products have also been sold to countries involved in the Yemeni conflict, including Saudi Arabia, the UAE and Bahrain. A Raytheon manufactured laser-guided bomb was used in an Saudi and Emiriti-led attack on a home in Ta’iz, Yemen on 28 June 2019. The attack killed six civilians, three of whom were children. A similar type of bomb was sold to Saudi Arabia in 2009, 2011, 2014, 2015, 2017 and 2019. The bomb was also sold to the UAE in 2017.

COVID-19: The Threat of Epidemics on the Worsening of Conditions in War-torn Yemen

Since 2016, Yemen has been facing an outbreak of cholera that has been challenging the country’s health system since then. By 2019, over 2 million cases were confirmed. Over these years, the armed conflict has undoubtedly worsened the conditions to counter this epidemic. This could mean that the current coronavirus health crisis could have even more devastating consequences if the virus spreads in Yemen. The first case was confirmed at the beginning of April, as the nightmare of the potential health emergency began to transpire. Many international organizations began to sound the alarm, calling for international aid and intervention to prepare the country for the devastating consequences that could occur. Oxfam expressed its concern over the situation, and the UN humanitarian coordinator Lise Grade said that the effect of the virus in Yemen would be “catastrophic” if it spreads. The country is not prepared for such a health crisis as it lacks adequate resources to monitor and counter it. The World Health Organization (WHO) fears that COVID-19 could rip through Yemen; the population has some of the lowest levels of immunity to disease compared with other countries. To make matters worse, hospitals and healthcare facilities continue to be battered by airstrikes from the ongoing conflict. Médecins Sans Frontières (MSF) reported five airstrikes on medical centres between 2015 and 2018, resulting in the suspension of all medical care from these facilities.

Despite all the challenges that Yemen has already endured as a consequence of the war, there is little sign of the conflict slowing. The United States still continues to fund a seemingly unlimited supply of weapons to Saudi Arabia, the UAE and Bahrain to perpetuate the war, so as to continue to reap in record profits. As SIPRI shows, many of the weapons that have been ordered have yet to be delivered to the country of purchase; indicating that the belligerent state parties do not plan on stopping any time soon. On top of the peril of COVID-19 further threatens what’s left of the already fragile and war-crippled healthcare system. The Yemeni people are at the brink of another disease-caused calamity, threatening the lives of millions of people. If the US has a shred of concern for the people in Yemen, it needs to immediately cease all current and pending arms transfers to the belligerent state actors of Saudi Arabia, the UAE and Bahrain.

Click here to find US exports to Saudi Arabia