Among the thousands of Bahraini citizens who participated in peaceful protests to call for political reforms and respect for human rights, the al-Khawaja family has been at the forefront of the ongoing struggle for human rights reform in Bahrain. Abdulhadi al-Khawaja, Salah al-Khawaja, Zainab al-Khawaja, and Maryam al-Khawaja have taken on an active role in campaigning against the government’s violent silencing of dissent, imprisonment of political dissidents, and targeting of human rights defenders.

This month, Americans for Democracy & Human Rights in Bahrain (ADHRB), the Bahrain Institute for Rights and Democracy (BIRD), and the Bahrain Center for Human Rights (BCHR) highlight four members of the al-Khawaja family who have been sentenced to prison in violation of their universal human rights, including the rights to free speech and assembly. In 2011, the Government of Bahrain arrested Abdulhadi, Salah, and Zainab for their participation in the pro-democracy protests. At the time of their arrest, Maryam was abroad conducting advocacy for the pro-democracy movement in Bahrain, and was told to remain abroad for fear of arrest if she returned.

Abdulhadi and Salah are currently serving prison sentences for charges related to their free expression, while Zainab has been sentenced to one year in prison for insulting the monarch and is still contesting several other sentences out of prison. Maryam was sentenced to prison in absentia when she attempted to return to Bahrain to visit her ailing father, and continues to advocate for human rights in Bahrain from exile in Denmark.

In highlighting members of the al-Khawaja family, we seek to raise awareness of the shrinking space for critical voices in Bahrain and recognize the al-Khawajas’ efforts to promote meaningful reform. 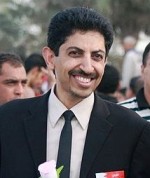 Abdulhadi al-Khawaja is a human rights defender and one of the founders of the Bahrain Center for Human Rights. He played a prominent role in Bahrain’s peaceful pro-democracy protest movement that began in 2011. On 9 April 2011, Bahraini security forces arrested Abdulhadi at his daughter’s apartment. During both his arrest and detention, officials tortured Abdulhadi, who suffered psychological abuse, sexual abuse, and physical beatings.

In June 2011, a military court sentenced Abdulhadi to life in prison for his peaceful activism, alongside 12 other leading activists and opposition leaders known as the Bahrain 13. Despite the UN Working Group on Arbitrary Detention’s 2012 decision that Abdulhadi should be released, he remains imprisoned under the charges of organizing and managing a terrorist organization, attempting to overthrow the government by force, and collecting money for a terrorist group.

In 2012, Abdulhadi started a hunger strike that lasted 110 days to protest his detention. On 7 January 2013, Bahrain’s highest appeal court upheld the sentence against Abdulhadi. He has gone on several additional hunger strikes since 2012, in August 2014 and spring 2015, to protest the ill treatment of detainees in prison. Abdulhadi suffers from several medical conditions as a result of his treatment in detention, and he has not received adequate medical treatment.

Abdulhadi remains in prison, despite calls by international organizations and UN bodies for his release. 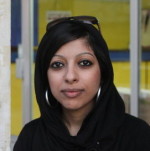 Zainab al-Khawaja is the eldest daughter of Abdulhadi and a prominent blogger and active critic of the Bahraini government’s human rights violations. In December 2011, security forces arrested Zainab for her role in staging a sit-in protest. Security forces rearrested her several times afterwards for her continued activism in the pro-democracy movement. Most recently, on 4 December 2014, Bahraini courts sentenced Zainab to nearly five years in prison on charges of insulting the king (by tearing his photograph), insulting a police officer, and entering a restricted area.

On 21 October 2015, an appeals court reduced Zainab’s sentence for insulting the king from three years to one year in prison. She remains at risk of being arrested at any time. On 17 November 2015, the courts postponed Zainab’s appeals hearing for another charge of entering a restricted area and insulting a police officer to February 2016, and she faces another appeals hearing on 3 December 2015 for her activism. She has stated that if she is imprisoned, she will fight to keep her infant son with her. 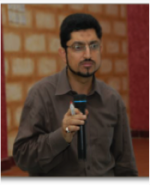 Salah al-Khawaja, the brother of Abdulhadi, is a Bahraini political activist. In 2011, Salah attempted to document the events happening on the ground and provide information to international media outlets. On 17 March 2011, National Security Agency forces broke into Salah’s home and arrested him. Security forces physically and verbally abused Salah’s wife during the arrest and confiscated the family’s belongings. When they arrested Salah, they threw him from the roof of the house onto the street. During his detention, security forces beat and tortured Salah. The National Security Court sentenced him to five years in prison under accusations of incitement to overthrow the regime. The court never presented any evidence during Salah’s trial to convict him of this charge. Salah remains in prison serving a five-year sentence. 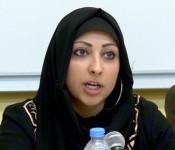 Maryam al-Khawaja is the youngest daughter of Abdulhadi and the co-director of the Gulf Center for Human Rights (GCHR). After attending early pro-democracy marches in February 2011, Maryam left the country to raise awareness of Bahrain’s human rights crisis overseas. When it became apparent that she may face arrest if she returned to Bahrain, she elected to stay in self-imposed exile and continue her human rights work abroad.

On 30 August 2014, Maryam flew to Manama to visit her ailing father Abdulhadi, who was on hunger strike at the time. Security forces arrested her upon arrival at the airport and charged her with assaulting a police officer, which she denies. In interrogations at the Public Prosecutor’s Office, Maryam refused to answer questions after the government prevented her from contacting her lawyer. The courts released Maryam on bail on 18 September 2014, and on 2 October, she fled Bahrain.

Maryam later stated that she had chosen to boycott her trial due to the judiciary’s lack of independence and the human rights violations she had suffered during interrogation. The criminal courts sentenced Maryam in absentia to one year in prison on 1 December 2014. She is at risk of imprisonment if she returns to Bahrain. Maryam continues to advocate for human rights and democratic reform from abroad.