Geneva, Switzerland – From 25 February to 22 March 2019, Americans for Democracy & Human Rights in Bahrain (ADHRB) participated in the 40th session of the United Nations’ (UN) Human Rights Council (HRC) in Geneva, Switzerland. During the session, ADHRB highlighted human rights violations committed by the Governments of Bahrain, Saudi Arabia, the United Arab Emirates (UAE), and other Gulf Cooperation Council (GCC) States. During the session, ADHRB delivered 19 oral interventions and hosted four side events. Many of the concerns pertaining to human rights abuses that ADHRB raised before the Council were echoed by UN officials, NGO representatives, and representatives from Member State delegations. 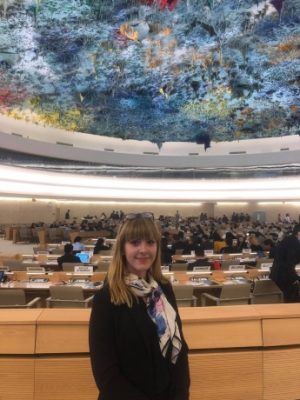 On 28 February, Margaret Mclntyre delivered the first oral intervention of the session. Speaking during the General Debate on Agenda Item 3 in the Interactive Dialogue with the Special Rapporteur on food and Independent Expert on foreign debt, McIntyre raised concerns that Bahrain would use economic aid from its GCC neighbors to invest in its repressive mechanisms, including arms deals, rather than on encouraging much-needed economic development. She concluded by asking the Expert on foreign debt what steps he could recommend states like Bahrain take to ensure that financial assistance is channeled towards paying off foreign debts and bolstering economic growth rather than furthering human rights violations.

On 1 March, ADHRB delivered several oral interventions. ADHRB’s first intervention was during the General Debate under Agenda Item 3 in the Interactive Dialogue with the Special Rapporteur on privacy and the Special Rapporteur on cultural rights. This intervention raised concerns over the Bahraini government’s cultural marginalization of its indigenous Baharna Shia population. In it, ADHRB noted how the government targets, denationalizes, and systematically represses Baharna religious leaders. More fundamentally, ADHRB highlighted steps the government is taking to erase the Baharna indigenous community from Bahrain’s history. 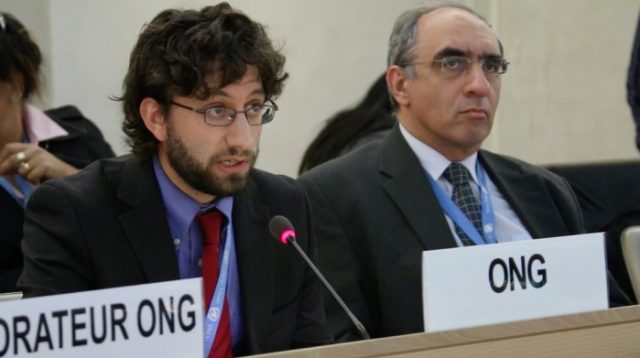 The second oral intervention ADHRB delivered on 1 March came during the same Interactive Dialogue with the Special Rapporteur on food and the Independent Expert on foreign debt. In the intervention, when ADHRB’s Advocacy Officer raised concerns about the impact of the war in Yemen on Yemenis’ access to food. He discussed the negative affect of the closure of Yemen’s ports and Sana’a’s airport on access to food, as well as the disastrous effect the move of the Central Bank of Yemen had on salaries and the ability to access food. The result of these policies and actions has been a humanitarian crisis in which 80 percent of Yemen’s population – around 24 million people – is in need of humanitarian assistance.

Later that day, McIntyre delivered another intervention, speaking during the Item 3 Interactive Dialogue with the Special Rapporteurs on privacy and on cultural rights, in which she discussed the negative impact that cyber surveillance has on privacy rights in the UAE. She highlighted that the Emirati government utilizes advanced surveillance technology to monitor citizens while officials have hacked hundreds of phones to obtain emails, location information, text messages, and photographs of activists and government critics. Among those who have been targeted is Ahmed Mansoor, a prominent human rights activist, who is currently serving a ten-year prison sentence. 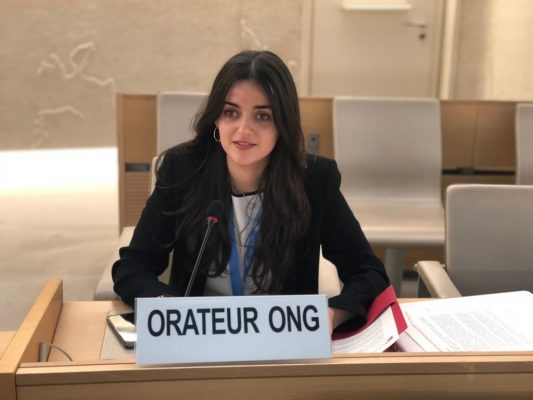 Clara Sánchez López delivered the final oral intervention on 1 March. Speaking during the Agenda Item 3 Interactive Dialogue with the Special Rapporteur on promoting and protecting human rights while countering terrorism, she expressed serious concern about the impact of Bahrain’s anti-terror legislation on civil and political liberties, highlighting that the Bahraini government dissolved political opposition societies including Al Wefaq and Wa’ad under the guise of countering terrorism. During her intervention, Lopéz stated that the government has systematically targeted human rights activists and government critics, jailing dissidents like Naji Fateel, Abdulhadi AlKhawaja, Abduljalil AlSingace, Sheikh Ali Salman, and Nabeel Rajab.

On the morning of Tuesday, 5 March, ADHRB held a side event panel on the deteriorating human rights situation in Bahrain, making the case that the deteriorating situation is ripe for prompt international action. Tor Hodenfield of CIVICUS moderated the panel, and Andrew Smith of Article 19, Bridget Quitter of ADHRB, Megha Ramesh of the Bahrain Institute for Rights and Democracy, and Ali Al Fayez, a Bahraini political activist, spoke. The panelists discussed restrictions on free expression and free association, the lack of independent media, denationalizations of dissidents, and reprisals against human rights defenders and activists critical of the government, in particular dissidents who attended HRC sessions. 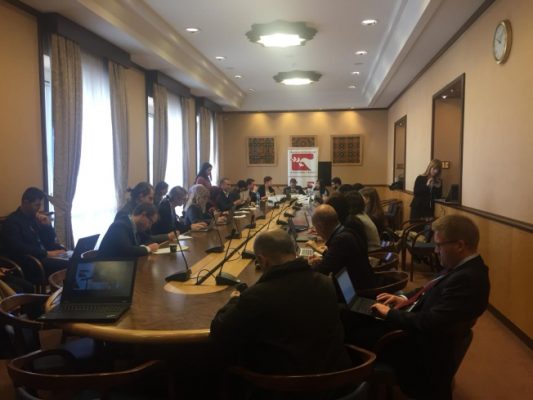 On Tuesday afternoon, ADHRB delivered an oral intervention during the Interactive Dialogue with the Special Rapporteur on religion and the Special Rapporteur on the sale of children, highlighting the oppression of Bahrain’s Shia Muslim community and ongoing restrictions on the right to freedom of religion. Later that day, López delivered another oral intervention under Agenda Item 3 during the Interactive Dialogue with the Special Representative of the Secretary-General on violence against children and children in armed conflict. Her intervention focused on the situations of minors held in Bahraini prisons and detention centers. She highlighted that security forces in Bahrain frequently physically abuse, assault, and torture minors in detention. 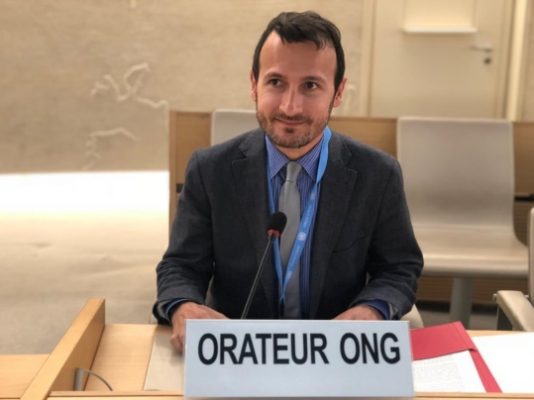 On Wednesday 6 March, Alessandro Musumeci delivered an oral intervention on behalf of ADHRB during the Interactive Dialogue with the Special Rapporteur on the environment and the Special Rapporteur on housing. In his intervention, Musumeci drew attention to the health problems villagers in the town of Ma’ameer experience as a result of air and water pollution stemming from nearby industrial activities. ADHRB delivered a second oral intervention on 6 March calling attention to Bahraini security forces’ abuse and torture of children in Bahraini detention. Later that day, ADHRB delivered a third oral intervention, this one during the Annual Debate on Rights of Persons with Disabilities. In the intervention, ADHRB drew the Council’s attention to Article 26 of the Convention on the Rights of Persons with Disabilities (CRPD), highlighting how Bahrain fails to abide by its treaty obligations under the CRPD to take adequate habilitation and rehabilitation measures for persons with disabilities and to ensure maximum independence and full integration for disabled individuals in all aspects of daily life. 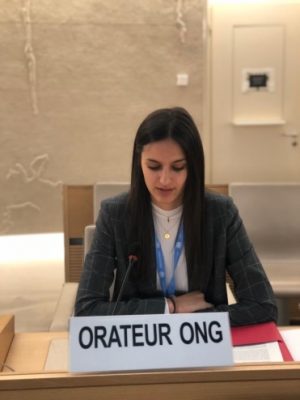 On 6 March, Naomi Kenifra delivered an intervention in French during the Interactive Dialogue with the Special Rapporteur on disabilities and the Independent Expert on albinism. Speaking about Saudi Arabia, she called the Council’s attention to the kingdom’s use of the death penalty against individuals with disabilities and discussed repeated human rights violations directed towards disabled persons. McIntyre also delivered an oral intervention during the debate with the Rapporteur on disabilities. In her intervention, she discussed the plight of persons with disabilities in Bahrain, highlighting Mahdi Kuwaid’s case – Kuwaid was arbitrarily arrested and tortured by Bahraini security forces. Salma Moussawi delivered ADHRB’s third oral intervention of the day during the debate with the Rapporteur on disabilities, reiterating ongoing rights violations toward disabled persons like Dr. Abduljalil AlSingace and Mahdi Kuwaid in Bahrain. Speaking in Arabia, Moussawi described how authorities abused and tortured disabled Bahraini activists.

On Monday 11 March, ADHRB and Amnesty International wrote a letter to states urging them to draft and deliver a joint statement addressing the deteriorating human rights situation in Bahrain. The letter noted the measures adopted by the government to eliminate the organized political opposition, close civil society space, target and jail human rights defenders and activists, and continue its pattern of reprisals against critics of the government. 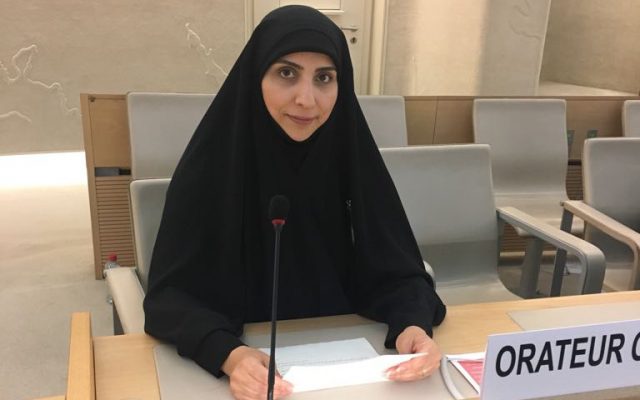 On the same day, Alexis Henning delivered an oral intervention during the General Debate under Item 3, criticizing Saudi Arabia’s restrictions on and targeting of activists and human rights defenders. She also called attention to the kingdom’s restrictions on freedom of expression and opinion, highlighting cases that have been raised by the Special Procedures, including Saudi expatriate Jamal Khashoggi – killed by the Saudi security force personnel on the orders of Saudi Crown Prince Mohammed bin Salman – and journalists, bloggers, writers, and women human rights defenders currently in prison. 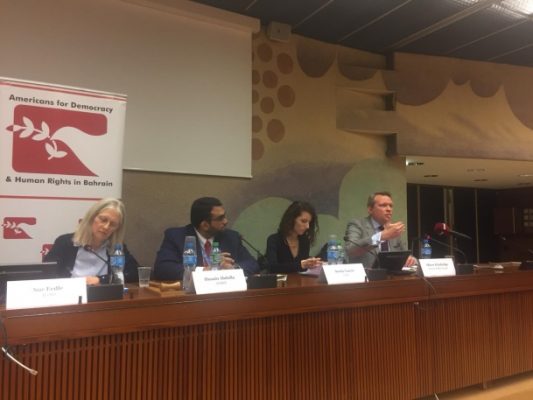 On the morning of Tuesday 12 March, ADHRB hosted a side event on impunity in Saudi Arabia. Husain Abdulla of ADHRB moderated the event, with remarks by Sue Eedle of ALQST, Oliver Windridge, a human rights lawyer, a researcher for ESOHR, and Sonia Tancic of FIDH. The panel also heard the testimony of Zainab Abu Al-Khair, the sister of torture victim Husain Abu Al-Khair, who is on death row in Saudi Arabia. In their remarks, the panelists expressed concern about the impunity enjoyed by Saudi security force personnel for abuses committed, including arbitrary detention and torture.

On Wednesday 13 March, Lopéz delivered an oral intervention during the Agenda Item 4 General Debate focusing on the plight of political prisoners in Bahrain. She highlighted the cases of the prominent political activists Sheikh Ali Salman, Hassan Mushaima and Abdulwahab Hussain who are currently serving long prison sentences. She called further attention to how the government is further mistreating Mushaima and Hussain by a denying them healthcare and restricting their access medication.

ADHRB delivered another intervention during the Agenda Item 4 General Debate, this one focused on Bahrain’s continued detention of human rights defenders. The intervention highlighted Abdulhadi AlKhawaja, Nabeel Rajab, Dr. Abduljalil AlSingace, and Naji Fateel’s cases, noting that their detention and treatment is emblematic of a larger trend of the Bahraini government’s suppression of dissent and harassment of human rights defenders. 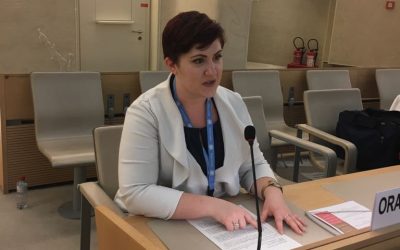 That same day, ADHRB delivered two interventions under Agenda Item 5, one of them by ADHRB’s Legal Officer Bridget Quitter. In her intervention, she raises concerns about Bahrain’s targeting of Sayed Ahmed Alwadaei’s family in reprisal for his human rights work. In the second Item 5 intervention, ADHRB raised concerns about Bahrain’s refusal to cooperate with the Special Procedures, highlighting cases of torture and arbitrary detention, in particular that of former gold medal Jiu-jitsu athlete Mohamed Merza Moosa. 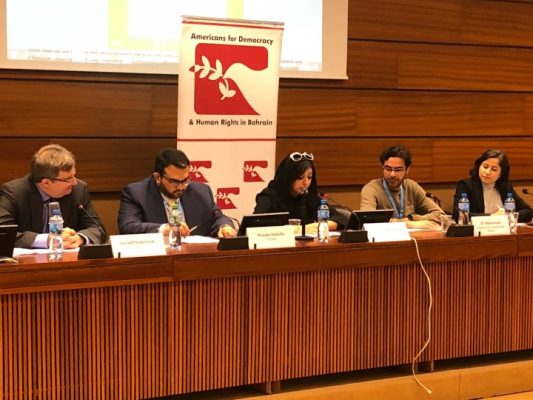 On 13 March ADHRB and the Gulf Centre for Human Rights co-hosted a side event assessing systematic torture in Bahrain. Zainab AlKhawaja of GCHR moderated the event, with remarks by Husain Abdulla, Executive Director of ADHRB, Ali Abdulemam, a Bahraini human rights defender and blogger, Aya Majzoub of Human Rights Watch, and Gerald Staberock of OMCT. The panelists discussed the impact of torture of abuse on victims and the pervasive culture of torture and impunity throughout Bahrain’s security forces and highlighted the role high-level figures in government, including Nasser bin Hamad and the Minister of Interior have in supporting and empowering torture and impunity.

On 14 March, ADHRB hosted another side event which panelists discussed systematic violations of human rights in Yemen. Moderated by ADHRB’s Advocacy Officer, Mohammed Alwazir and Ahmed Alshami of the Arabian Rights Watch Association, Abdulqader Almurtadha, the Head of the Prisoner Exchange Commission in Sana’a, Dr. Aiman Al-Mansor of Insan Organization, and Bridget Quitter of ADHRB discussed how the war in Yemen has led to one of the worst humanitarian crises in the world in which thousands have died, and millions suffer from famine and poverty. 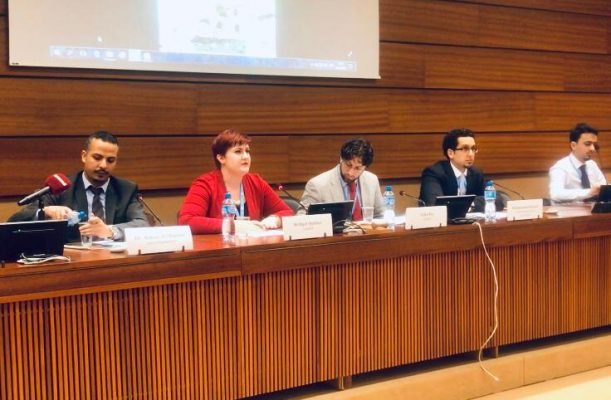 On Friday 14 March, McIntyre delivered an oral intervention during the Item 6 UPR Outcome Review for Jordan and expressed concern rights abuses like in Yemen and Bahrain. McIntyre also highlighted restrictions on freedom of expression and civil society, condemning the detention of rights defenders and activists for speech critical of the kingdom or government.

During the final week of the session, the Human Rights Council approved and adopted several resolutions, decisions, and President’s statements. ADHRB paid special attention to the resolution regarding human rights, democracy and the rule of law and the decisions on the outcome of the Universal Periodic Review for Saudi Arabia. 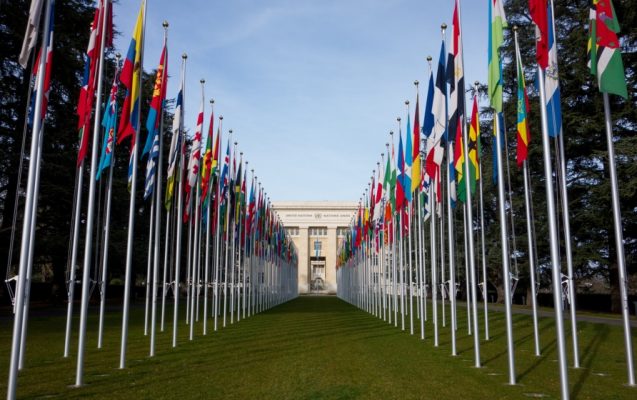